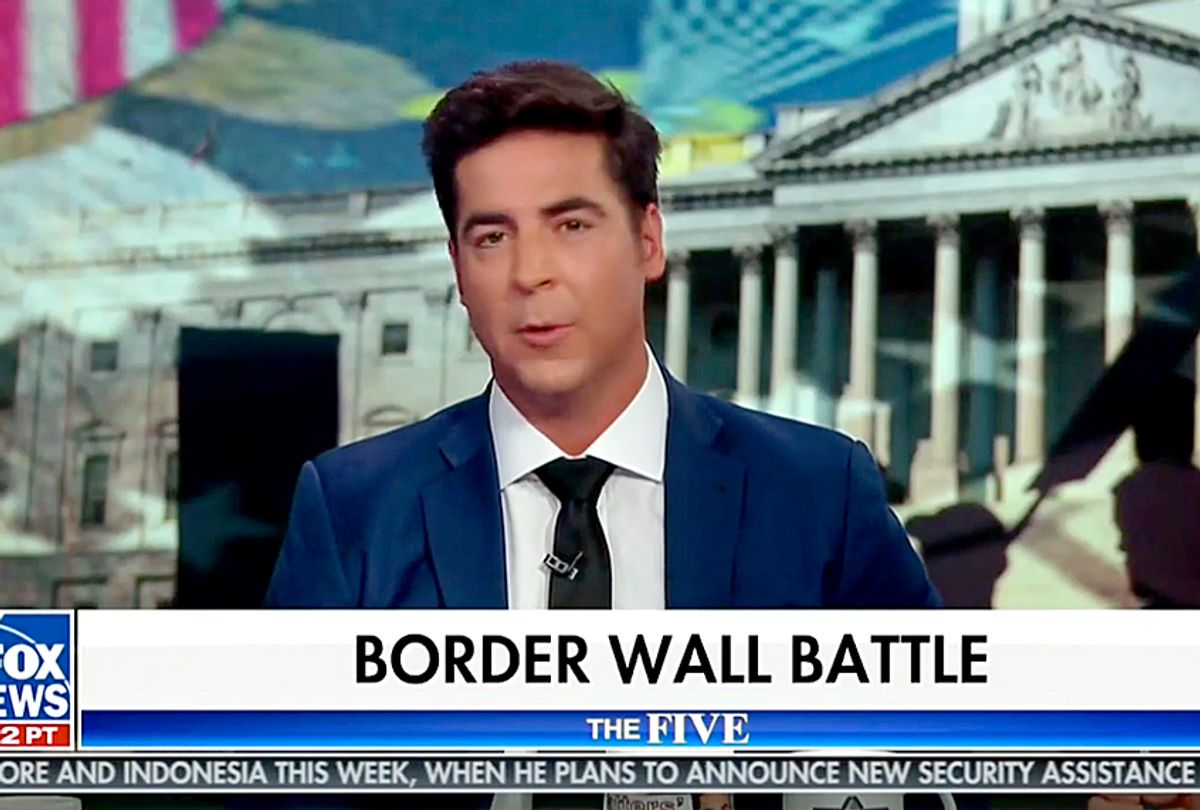 Fox News host Jesse Watters claims that President Donald Trump wants to bring "the best and the brightest" immigrants to the U.S. over "some guy's uncle from Zimbabwe."

The racially-charged remarks were uttered Monday during a panel discussion on "The Five" about Trump's demand that the Republican-controlled Congress rally behind an omnibus spending bill – which would provide federal funding for his campaign trail promises of a border wall and hardline immigration policies – or face a possible shutdown.

Watters' comments followed co-host Juan Williams' allegation that Trump desires to bring an end to all forms of immigration — whether legal or not. "He wants to cut legal immigration," Williams said. "Don't forget that."

That is when Watters dove in. "He wants merit-based," Watters said. "That would cut legal immigration by bringing in the best and the brightest. So we don't bring in some guy's uncle from Zimbabwe."

"I get it, I want Norway, too," Williams jabbed back. "Norway, Norway."

The panel discussion paralleled an incendiary question that Trump posed to lawmakers during a discussion about overhauling the U.S. immigration system, in which he bashed El Salvador, Haiti and countries in Africa. Of the incident, Salon's Matthew Rozsa wrote:

"Why are we having all these people from sh**hole countries come here?" Trump asked the lawmakers, then responding that America should instead have more immigrants from nations like Norway, whose prime minister he had met with on Wednesday.

He later added, "Why do we need more Haitians? Take them out."

. . . "There is no other word one can use but racist. You cannot dismiss entire countries and continents as ‘sh*tholes’, whose entire populations, who are not white, are therefore not welcome," Rupert Colville, the United Nations' human rights spokesman, told reporters during a Geneva news briefing.

As with Trump, allegations of racism were soon cast at Watters. On Twitter, Judd Legum, the founder of ThinkProgress called the segment a display of "casual racism on Fox News."

But this is not the first time that Watters has found himself in hot water after making racially-charged remarks on TV. He remains largely recognized for a controversial 2016 visit to Chinatown for "The O'Reilly Factor." At the time, Variety wrote:

In the "Watter's World" segment, the host was sent to Chinatown in New York to "find out what folks think about the 2016 election" after China was mentioned 12 times during the first presidential debate.

Watters asked random passers by political questions such as "Do you like Donald Trump?" and "Who you going to vote for?" but also other questions like "Is it the year of the dragon…rabbit?" and "Do they call Chinese food in China just food?"

Towards the end of the segment, Watters abandons questioning around the presidential election and instead visits a karate dojo, swings some nunchuks and receives a foot massage.

Among those who spoke out against the portrayal of Chinese Americans was New York City Mayor Bill de Blasio. "The vile, racist behavior of Fox's Jesse Watters in Chinatown has no place in our city," the mayor tweeted. "Fox News – keep this guy off TV."

And, on his own show, Watters once infamously declared that "America is not a racist nation – it's time we stop acting like it is."

Immediately thereafter, the Fox host began to tease upcoming segments on "Watters' World" about people of color. "Are Maxine Waters and Susan Rice siding with a North Korean dictator? We'll debate it next," he said. "And later: Guys with guns threatening President Trump over food stamps."

Monday's Fox News segment came after Trump alleged that the U.S. is the "laughingstock of the world" because of its immigration policies during a joint press conference with Italian Prime Minister Giuseppe Conte.

"I would have no problem doing a shutdown," Trump said at the White House. "I always leave room for negotiation, but this has been many years . . . I would certainly be willing to close it down to get it done."

When asked whether he had the full $25 billion he is seeking to construct the border wall he vowed would be paid by Mexico, Trump said no.

"I have no red line," he said. "I just want great border security."

Government funding will run out at the end of the day on Sept. 30 if Trump and Congress can't reach a deal.

Although Democratic lawmakers backed down after forcing a brief government shutdown earlier this year, the fight was over Trump's refusal to extend Obama-era protections to DACA recipients, the undocumented immigrants who had been brought to the U.S. illegally as children, to prevent deportations.