"24" returns as a prequel: Will it bring its old baggage to the "new" Fox? 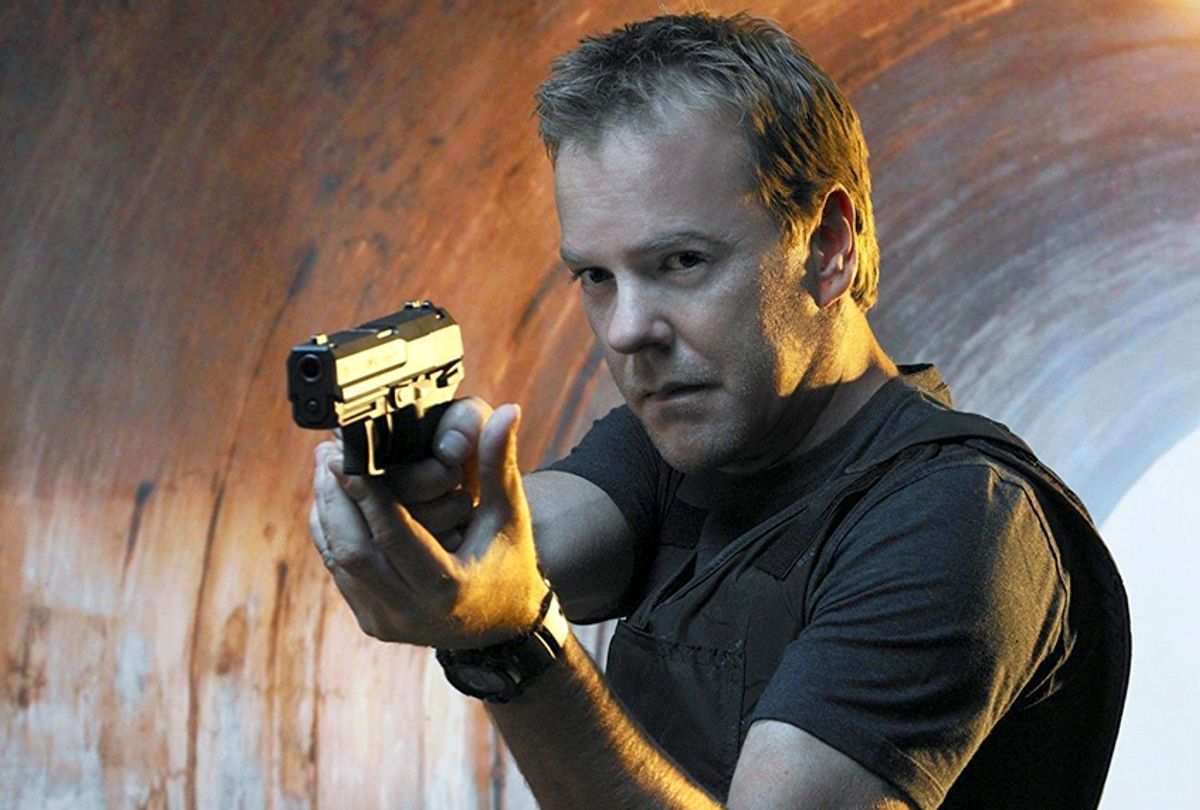 By then his adventures had spanned two presidential administrations, and his missions forced him to face off with extremists, drug cartels and foreign spies.

Between 2001, when the series premiered on Fox, and 2010, when Fox canceled it, Jack Bauer (Kiefer Sutherland) stopped nuclear attacks, assassinations of government officials, thwarted plans to unleash dirty bombs and bioweapons on highly populated urban centers, among other threats. When last we checked in with “24,” Jack was being whisked away by the Russians.

This may lend itself to the supposition that Fox’s recently announced revival of the “24” brand would allow Jack to face off with a modern enemy but, not so fast.

The latest addition to the “24” family of quality products (which includes the movie “24: Redemption,” the 2014 event series “24: Live Another Day” and 2017’s attempted reboot with a different hero, “24: Legacy”) is a prequel and legal drama that applies the same ticking-clock format to time-sensitive stories set within the justice system.

“The mechanism of telling a show set in real time is unique to ‘24,’ and we think it still has a lot of power and a lot of legs,”  Fox Television Group chairman and CEO Gary Newman said Thursday. “And, ever since the show went off the air, we’ve talked about “How do you reimagine ‘24’?”

If production proceeds as planned, it will serve as a booster to what Newman and fellow Fox Television Group chairman and CEO Dana Walden are dubbing the “new” Fox.

This soft effort of reframing (if not quite rebranding) Fox is the result of the announced merger of Fox and Disney, which allows Disney to absorb Fox’s film and TV studio assets, as well as its cable networks (including FX), and granting it a 30 percent stake in Hulu.

Walden explained what this means.

The “new” Fox, she said, “will be the only network to operate with complete independence. It will have the ability to pick up the best shows from any production company, with no studio agenda. We see this as a great opportunity to get vibrant, independent studios back on broadcast.”

Independent studios have increasingly gotten muscled out of broadcast over the last decade or so. As Walden cited, five years ago, network unaffiliated studios landed 16 new series on the major networks. In the past year, Walden said only six made it.

“These were the season’s top rated series on ABC, CBS and NBC: ‘Roseanne,’ ‘Big Bang Theory’ and ‘This is Us,’” Walder said. “And guess who produced them? Indies and outside studios.”

That said, out of the many properties that are closely affiliated with the Fox broadcast brand, “24” is among the the most recognizable for positive and negative reasons. As much as Fox is touting its new direction, part of its success model relies on an old and possibly outdated standby.

Original series creators Joel Surnow and Bob Cochran and executive producer Howard Gordon are all on board for the project, which Fox announced in the trades on Monday. Purportedly it is an origin story that reveals how Jack rose from a regular agent to a guy with superhuman bladder control who defies the laws of time, space and Los Angeles rush hour traffic.

Nothing about this is out of line with the current era of reboots, in which nearly every title that used to have the pulse of popular culture is receiving some version of an update.

This includes “Alf.” Nope, that is not a joke.

However, America’s favorite alien with a taste for cats and a Borscht-belt style of humor never made a practice of villainizing brown people as a plot device. This where returning to “24” right now, in the middle of an administration led by a president that enacted a travel ban targeting Muslim countries and targeting Hispanic, African and Middle Eastern asylum seekers, might raise some questions.

“The times are fraught now,” Walden admitted. “These are emotional times. Security continues to be a big issue. So in terms of the prequel, people loved Jack Bauer, and you want to tell a story that the audience would very much connect with how did that character become who he was? It would be set in the same world of security, which I think continues to be very relevant.”

Solely viewing this decision through a business lens, taking another crack at “24” is sensible.

It remains one of Fox’s most durable franchises; “Legacy,” the first edition that did not star Sutherland, may have tanked in the ratings, ending its single season with only 3.4 million viewers tuning in to the finale, but its post-Super Bowl premiere still attracted an audience of 17.5 million. The lesson here, perhaps, is that while people might not necessarily stick with “24,” a sizable number of them may still be loyal to Agent Bauer.

And this gives the prequel a higher chance of gaining notice in a landscape crowded with scripted content across a growing number of platforms.

But who knows what the state of the national psyche will be by the time these titles premiere? What new outrage heretofore considered to be unthinkable will be igniting protests?

Certainly the nature of terrorist crises evolved throughout the decade it was in production. Without question, “24” remains a quintessentially post-9/11 series, one that informed national conversations regarding torture.

The late Justice Antonin Scalia, in fact, cited Jack’s torture methods as examples of scenarios where torture is an efficacious means of gleaning information from uncooperative suspects, as if “24” were a biographical series as opposed to fiction.

And a 2007 New Yorker feature on “24” and Surnow and how the drama’s scenarios had influenced our views on real-life torture ran under the headline of “Whatever It Takes” — a line Jack ominously growled during an episode as if to acknowledge, if not necessarily agree with, the criticisms regarding the series’ fetishizing of torture.

The fact is, the show has been cited as helping to fan the flames of Islamophobia, whether in its original version or in 2017’s “Legacy.”

In response to this being pointed out to Newman he replied, “Looking back at ‘24’ from season to season, the bad guys, if you will, really varied from Eastern Europeans and Russians to Asians to people in the Middle East. So while I understand why that criticism was made, I think if you really examine it, it wasn’t quite as one sided as it seemed.”

There is some truth to that. The show’s fourth season is one that specifically focused on an Islamic terrorism threat, and one Gordon has gone on the record as regretting in hindsight. In large part the evil behind the scenes was eventually revealed to be a highly-placed government official or a businessman misdirecting CTU. Jack and his cohorts have faced off with Chinese agents and Mexican kingpins and African warlords.

Nevertheless, the negative associations with xenophobia are there for a reason: many of these plots are enabled by brown people. Even “Legacy” begins with the hero fleeing Islamic militants who are hunting down his army unit. Eventually we discover that they’re tied to a more powerful network of Chechnyan criminals and other white people, but still: it’s the Middle Eastern guys who are the first foot soldiers of the grander scenario.

Today’s great national nightmare is rise of white nationalism, a movement whose adherents have been the cause of a spike in race-related assaults and a rising death toll on American soil. The current presidential administration refuses to refer to these groups as terrorists.

That said, Timothy McVeigh, the man who killed 168 people when he bombed of the Alfred P. Murrah Federal building, had connections to fringe extremist groups; that took place in 1995, well within the timeframe of a possible prequel. So that’s worth keeping in mind.

Yet, when we finally get to see these series, nearly two decades will have passed since we first met Agent Bauer.

By the time Jack returned in 2014 for the limited series “24: Live Another Day,” the world had moved on from fearing al-Qaeda to trembling at the hasty rise of ISIS.

But then, so had most of the “24” audience: At the height the thriller’s popularity, “24” enjoyed a season average of nearly 14 million viewers. The event series hovered around 6.33 million.

Since then we’ve be introduced to Boko Haram and MS-13, the latter of which has become a bogeyman used to justify our draconian immigration policies and abhorrent detention practices at our borders.

Along with all of this, the audience has gotten so very fatigued with being inundated by ghastly news. So whenever the “24” prequel and its legal cousin finally premiere, it tough to say whether we’ll think it’s right on time, or if we’ll prefer for Fox to serve us something entirely new.