"Actions to work together with Russian nationals to subvert our code would be a legal collusion," Coons says 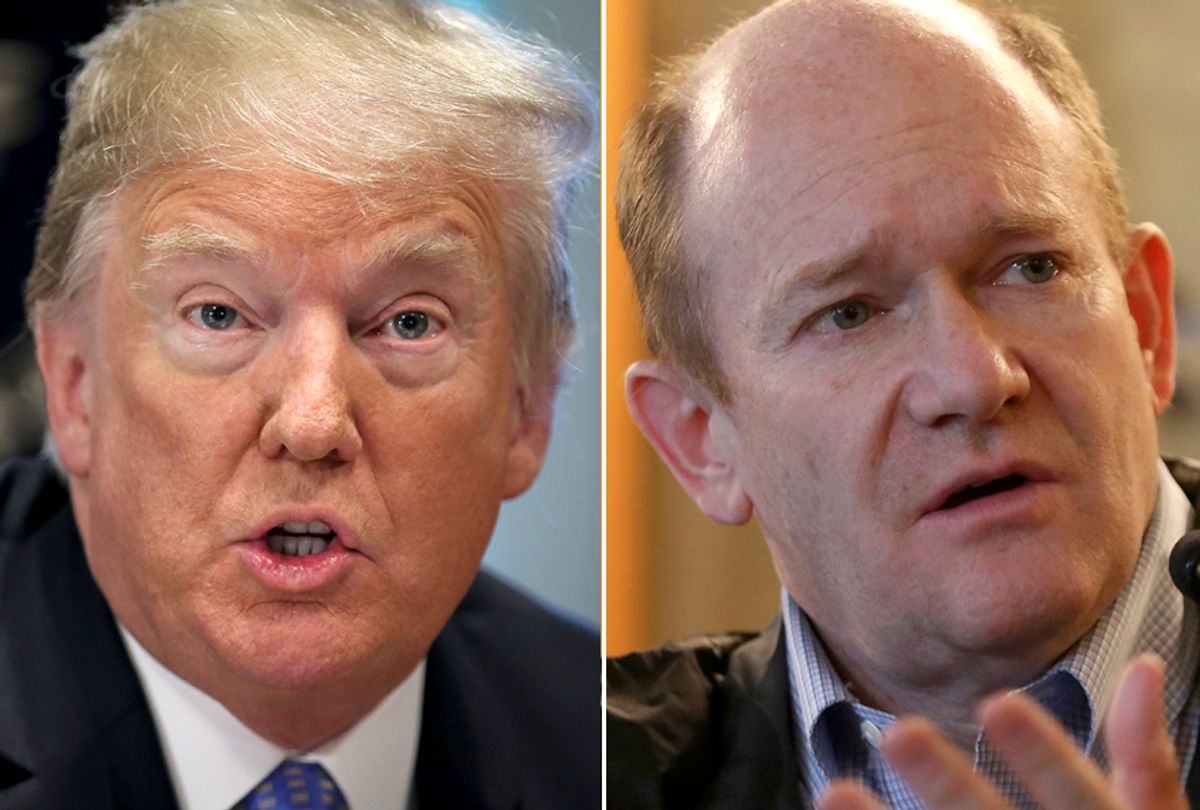 Democratic Senator Chris Coons of Delaware took the liberty of schooling President Donald Trump's legal team about what "collusion" means and if it is, in fact, considered a crime.

Trump and his lawyer Rudy Giuliani, who have insisted for months that there was "no collusion" between Trump and Russia, are now claiming that if there was collusion, it would be no big deal.

In a video shared Wednesday on Twitter, Coons detailed why it is, indeed, potentially criminal for a presidential candidate to work with a foreign power to undermine his opponent's campaign.

"What we're talking about here is an ongoing investigation by Robert Mueller, the special counsel, into whether or not Russian nationals — military intelligence staff of the Russian GRU — provided some assistance to the Trump campaign in 2016, and whether or not that form of collusion or cooperation might be illegal," said Coons, a member of the Senate Judiciary Committee.

"I took the liberty of looking to United States' code. In Title 52, Section 30121, it says, 'It shall be unlawful for a foreign national directly or indirectly to make a contribution or donation of money or other thing of value in connection with a federal, state or local election,'" Coons added. "And it goes on to say, 'or for a person to solicit, accept or receive a contribution or donation described above from a foreign national.'"

"It seems pretty clear to me that anything like a treasure trove of thousands of hacked emails — that is a thing of value — being solicited, accepted by an American campaign from Russian nationals would be a clear violation of U.S. code," Coons concluded. "And actions to work together with Russian nationals to subvert our code would be a legal collusion."

Coons then presented Giuliani with his own legal counsel.

"My advice to Mr. Giuliani would be, instead of arguing that it isn't illegal, to advise his client to cooperate fully with the Mueller investigation in the hope and expectation that if he is innocent he'll be fully cleared — and if not — that our laws will be enforced."

Coon's lesson comes after Giuliani told CNN on Monday that "I don't even know if that's a crime — colluding with the Russians."

"Hacking is the crime," he continued. "The president didn't hack. He didn't pay for the hacking."

Recently, Giuliani claimed Trump would agree to speak with Mueller's team if the federal investigators confined their inquiries to one topic: whether or not his client's 2016 election campaign colluded with Russia.

In exchange, Trump’s lawyers have asked that the topic of potential obstruction of justice in Mueller's investigation not be brought up when investigators interview the president, according to Giuliani.

The president has previously told reporters that he was willing to speak with the special counsel.

"I would do it under oath," Trump told reporters at the White House in January. "Absolutely."