The weird art of cooking with an espresso machine

You can put more than just coffee grounds through the espresso machine, often to subtle and amazing results 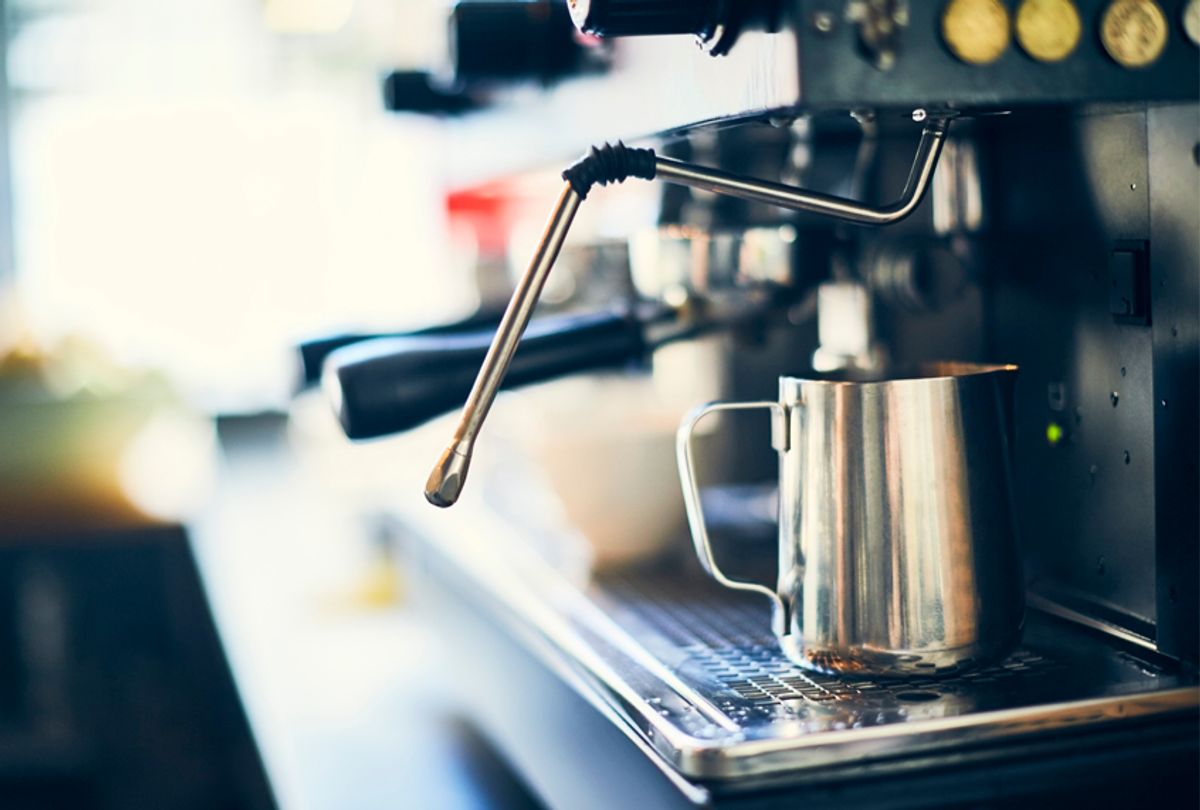 I never set out to buy an espresso machine; rather, one merely appeared in my house one day. “I found this on the street,” my then-housemate explained, “on the Free Corner” — that is, a 20-foot section of sidewalk-adjacent chain link fence in our West Oakland neighborhood, which had become a de facto swap meet for the neighborhood and an eternal fount of free clothes, furniture, and occasionally appliances.

I’d estimate that Free Corner appliances worked maybe 50% of the time — not bad, all things considered — and after a thorough cleaning and inspection, and a few tests, the espresso machine seemed perfectly functional aside from a little extra burbling of hot water out of the steam wand during a trial run. Ours was a Krups, and while I am not certain of the exact model, it most closely matches the 880-42 Gusto Pump, which can be had used on Amazon for around $90. As far as espresso machines go, the Krups was fairly advanced: it had a steam wand that could produce froth like waves lapping at the shore at high tide, and the espresso cup - technically called a portafilter — was solid aluminum with two different sized filter baskets. It didn’t have all the bells and whistles of the expensive espresso machines — no built-in grinder or tamper — but for a street find, it was more than functional.

For years, I used the espresso machine in its predefined way: for making espresso drinks. But as the years went on, I began to get curious about what other kinds of things one might do with it. I am generally more of a tea drinker than a coffee drinker anyway, and have long harbored an obsession with rooibos, the delicate, earthy herbal tea (Westerners sometimes know it as “red bush”) with a bright red hue native to South Africa. Years ago, I read a story about how rooibos was served in South African cafes as an alternative to espresso: one could order a rooibos latte or an espresso latte, a rooibos cappuccino or a regular cappuccino, for instance.

Not knowing any of the mechanics of how this might work, I decided to experiment. I loaded the portafilter with rooibos leaves, let it heat up, and turned it on. Out of the dual holes at the bottom oozed a deep red liquid, nearly opaque — a stark comparison to the semi-translucent hue of steeped rooibos. As the boiling water extruded through the portafilter’s pores, the color did not lighten nearly as fast as coffee espresso: I obtained nearly two liquid shots, rather than one, from the same volume of raw ingredients.

Once I had my rooibos espresso, I went about making a latte as I would with coffee espresso. Unlike with normal steeped rooibos, this espresso-brewed rooibos was sweeter; extruding the hot water through the looseleaf and filtering it in the portafilter seems to release some previously hidden ambrosia intrinsic to rooibos.

While rooibos’ flavor was particularly intriguing through the portafilter, I found that other tea leaves and spices, too, could be subjected to the espresso’s steamy embrace and come out the other end metamorphosed — distinct from their steeped counterparts. A fine black tea, especially one pre-blended with lavender, produces a much richer and more opaque version of brewed tea — more concentrated and better suited to making a tea latte. Other experiments failed: powders like matcha, cocoa powder and cayenne didn’t seem to mix well with their other ingredients inside the portafilter, and remained largely within the portafilter cup itself without becoming solutes.

Eventually these experiments moved away from drinks and into other culinary experiments. Unlike other cafe drink flavors — like matcha, cocoa, coffee and earl grey — rooibos is rarely used in sweets. I have seen all of the aforementioned flavors appear in fine desserts — say, cookies, truffles, gelato or macarons. Yet there are few instances of rooibos being used comparably. (I did find one online recipe for rooibos and honey macarons, though those require “rooibos dust,” something I have never seen in North America.)

Due to its faint sweetness, rooibos is a good candidate for desserts and sweet foods. Yet unlike other concentrated spices that mix easily in dessert batters, like cardamom or cinammon, rooibos is extremely subtle; it would take a great deal of it to create a concentrate suitable for a dessert. Could the espresso machine be the answer?

I produced six shots of rooibos concentrate from three portafilters full of the looseleaf, then set it aside and made cookies following a standard sugar cookie recipe, but with rooibospresso substituting for milk (and a pinch more baking powder to make up for the lack of rising that the milk would have brought). Unfortunately, once the cookies were out of the oven, the dark, viscous redness of the rooibos concentrate had vanished: they looked like normal sugar cookies with only the faintest hint of red. The rooibos’ taste was diluted, sadly — they tasted like normal sugar cookies. The rooibos-spresso experiment would not translate to pastry cooking as I’d hoped.

Even if that was a bust, I still felt that I had discovered something unique about the portafilter and the unique way that it brings out hitherto unknown flavors. Just as sous vide brings out different flavors as opposed to sauteeing the same meats, so, too, does an espresso machine produce and highlight different notes than steeping does.

There’s remarkably little online about cooking with an espresso machine: a few blogs, including this one from Lifehacker, describe how to use the steam wand to “steam scramble” eggs. Obviously, steam is an excellent kitchen tool, something that bread bakers have known and experimented with for centuries in an effort to make perfect crusts. Yet my culinary experiments with the espresso machine have revolved around not around the steam wand but using the cup — which, with its capacity to extrude hot water through a porous solid while straining it finely, allows the chef to produce concentrates that are quite different in taste and consistency than a stovetop reduction might allow.

I still have that Free Corner Krups machine today, and I still put weird things inside it that aren’t coffee. Yes, I would likely be voiding my warranty, if I actually had one — yet it is well worth it in the name of inventing new culinary techniques.

Turn on your espresso machine and let it heat up. Put the looseleaf rooibos inside the portafilter cup, leaving a few millimeters of room at the top. Tamp it down. Run the espresso machine until the “rooibospresso” out of the bottom changes in hue from opaque red to slightly translucent, probably about 2-5 ounces.

In a separate metal container, steam the milk or milk alternative until it is frothy at the top. Pour it over the top of the rooibos concentrate as you would a normal latte. Add sweetener to taste. I prefer maple syrup for how it mixes with the rooibos’ subtle sweetness; others prefer honey, which is more commonly paired with rooibos.