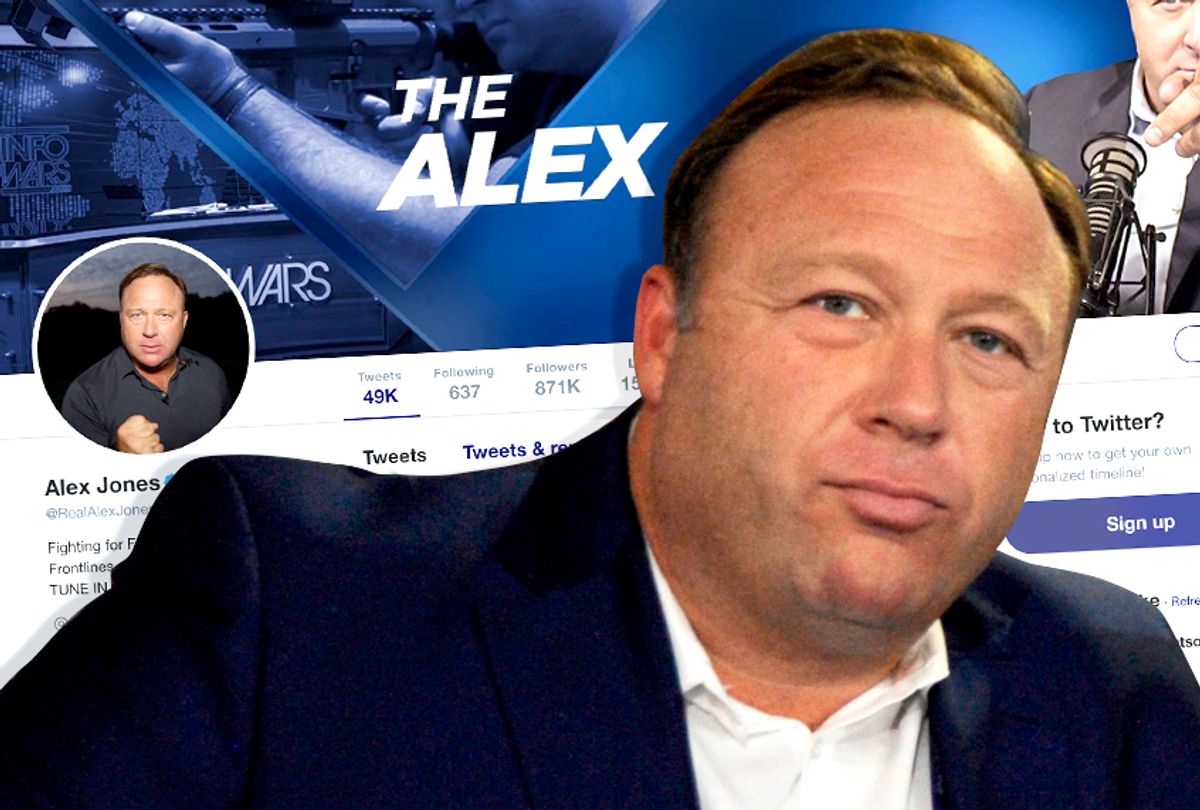 Twitter CEO Jack Dorsey is defending his decision to allow Alex Jones to continue posting on the social media platform.

"We didn’t suspend Alex Jones or Infowars yesterday," Dorsey explained in a tweet on Tuesday, referring to Alex Jones' TV and radio show, titled "Infowars." "We know that’s hard for many but the reason is simple: he hasn’t violated our rules."

"We’ll enforce if he does" violate those rules, Dorsey continued. "And we’ll continue to promote a healthy conversational environment by ensuring tweets aren’t artificially amplified."

He added, "accounts like Jones' can often sensationalize issues and spread unsubstantiated rumors, so it's critical journalists document, validate, and refute such information directly to people can form their own opinions."

Because Twitter's rules for banning accounts based on abusive behavior mention that "context matters," Dorsey has given himself considerable latitude when it comes to determining if and when to ban certain people from the platform. For instance, the rules state that it will consider if "the behavior is newsworthy and in the legitimate public interest," a factor that could apply to public figures from President Donald Trump down to Jones himself.

At the same time, Dorsey has not been consistent in his approach to these matters. In July 2016, he banned then-Breitbart columnist Milo Yiannopoulos from the platform for fomenting harassment against "Ghostbusters" actress Leslie Jones. Other Twitter actions taken against members of the alt right led to the founding of platforms like Gab, an alternative social network that its users claim is less restrictive about the kind of speech that can be put there.

This lack of consistency hasn't stopped some conservatives from praising Dorsey's decision, however.

"First of all it takes a bit of courage for Jack Dorsey, the CEO of Twitter to come out and say he's not going to ban Alex Jones when you have these other tech giants, Facebook, Apple, Google and others kicking him off on the grounds of what they call hate speech, or spreading conspiracy theories. And Dorsey is getting absolutely hammered on Twitter over his decision," Howard Kurtz of Fox News said on Thursday, according to Media Matters For America.

This brings us to the salient context behind Twitter's decision: Dorsey's statement about Jones comes after Apple, Facebook and YouTube (which is owned by Google) acted earlier this week to content from Infowars and its head, Jones, for violating their user terms prohibiting hate speech.

"When users violate . . . policies repeatedly, like our policies against hate speech and harassment or our terms prohibiting circumvention of our enforcement measures, we terminate their accounts," a spokesperson for YouTube told The Washington Post in a statement. YouTube has taken down the Alex Jones Channel, as well as other top channels associated with Infowars, according to CNN. All together, these channels had 2.4 million subscribers and an aggregate of 1.5 billion views.

Facebook claims it decided to engage in further action against Jones after more complaints about content on his pages was reported. "Upon review, we have taken it down for glorifying violence ... and using dehumanizing language to describe people who are transgender, Muslims and immigrants, which violates our hate speech policies," the company said in a statement.

Finally, there was Apple, which on Sunday removed the majority of the podcasts published by Infowars from iTunes and its podcast apps. In a statement to the Post, the company explained that "Apple does not tolerate hate speech, and we have clear guidelines that creators and developers must follow to ensure we provide a safe environment for all of our users. Podcasts that violate these guidelines are removed from our directory making them no longer searchable or available for download or streaming. We believe in representing a wide range of views, so long as people are respectful to those with differing opinions."

Not surprisingly, Jones responded to these actions by playing the victim. Here are the paragraphs from the Post's article that mention his responses to the publication:

In a series of text messages to The Washington Post, Alex Jones called the decisions to remove him from Apple, Facebook and Spotify “a counter-strike against the global awakening.” He accused Apple and Google of colluding with the Chinese government, mainstream news organizations, the Democratic Party and establishment elements of the Republican Party to misrepresent his views and deprive him of platforms that allow him to spread his messages.

“We’ve seen a giant yellow journalism campaign with thousands and thousands of articles for weeks, for months misrepresenting what I’ve said and done to set the precedent to de-platform me before Big Tech and the Democratic Party as well as some Republican establishment types move against the First Amendment in this country as we know it,” he said.

“You’re on the wrong side of history mainstream media,” Jones said in a text message to The Post. “You sold the country out, and now you’re going to pay for it.”

Regarding Jones' self-glorification, starting with the idea that this is a "a counter-strike against the global awakening": I am reminded of the famous John Adams quote that "facts are stubborn things; and whatever may be our wishes, our inclinations, or the dictates of our passions, they cannot alter the state of facts and evidence." What Jones describes as a "global awakening" is in fact the propagation of fictions that masquerade as facts — from arguing that school shootings and the September 11th terrorist attacks were inside jobs to claiming that there is a conspiracy to commit white genocide and vaccines cause autism (for some truth on that, see my interview with Sesame Street's Julia puppet, which Jones denounced).

He has also repeatedly spread hateful lies about immigrants, Muslims and the transgender community, to name just a few of the groups that he has regularly disparaged.

There is no truth in these claims, and certainly no sincere passion for justice. These are the rants of a man who creates fictional problems and lashes out at vulnerable scapegoats. Intelligent and rational minds — liberal, conservative, moderate, libertarian, socialist or anything between — have no use for such nonsense. Any "conspiracy" that exists against him from either Big Tech or mainstream journalists (or both) stems from a desire to stop treating noxious fictions and prejudices as if they are the equal of stubborn facts.

Congress shall make no law respecting an establishment of religion, or prohibiting the free exercise thereof; or abridging the freedom of speech, or of the press; or the right of the people peaceably to assemble, and to petition the government for a redress of grievances.

Notice how it doesn't say anything about what private corporations can do with regard to speech they find objectionable. Certainly it is reasonable to disagree with a decision made by a business regarding the ideological content it deems permissible within its organization (such as I and many on the left disagree with the NFL's stance on player protests), but there is a major difference between saying a corporation is ideologically wrong and insisting that it has somehow violated your First Amendment rights. The former argument can be open for thoughtful debate; the latter reveals profound ignorance about or a disingenuous reading of the First Amendment.

As for Jones accusing his critics of selling the country out and being on the wrong side of history? I'll simply remark that, given President Donald Trump's shameful behavior toward Russia — a hostile foreign power that continues to wage an active war against America's democratic process — an avowed Trump supporter like Jones has no business accusing anyone of having "sold the country out." And if opposing anti-factual right-wing propaganda and supporting American interests over those of Russia puts is "wrong," I imagine patriots everywhere don't want to be right.

I stuff my mouth to cope with Donald Trump

Overeating to deal with the Trump phenomenon.