Issa Rae is not here to compromise: The "Insecure" creator and star on why "this is our time"

The Emmy-nominated actress discusses LA, unapologetic creatives of color and working with her '90s TV idols 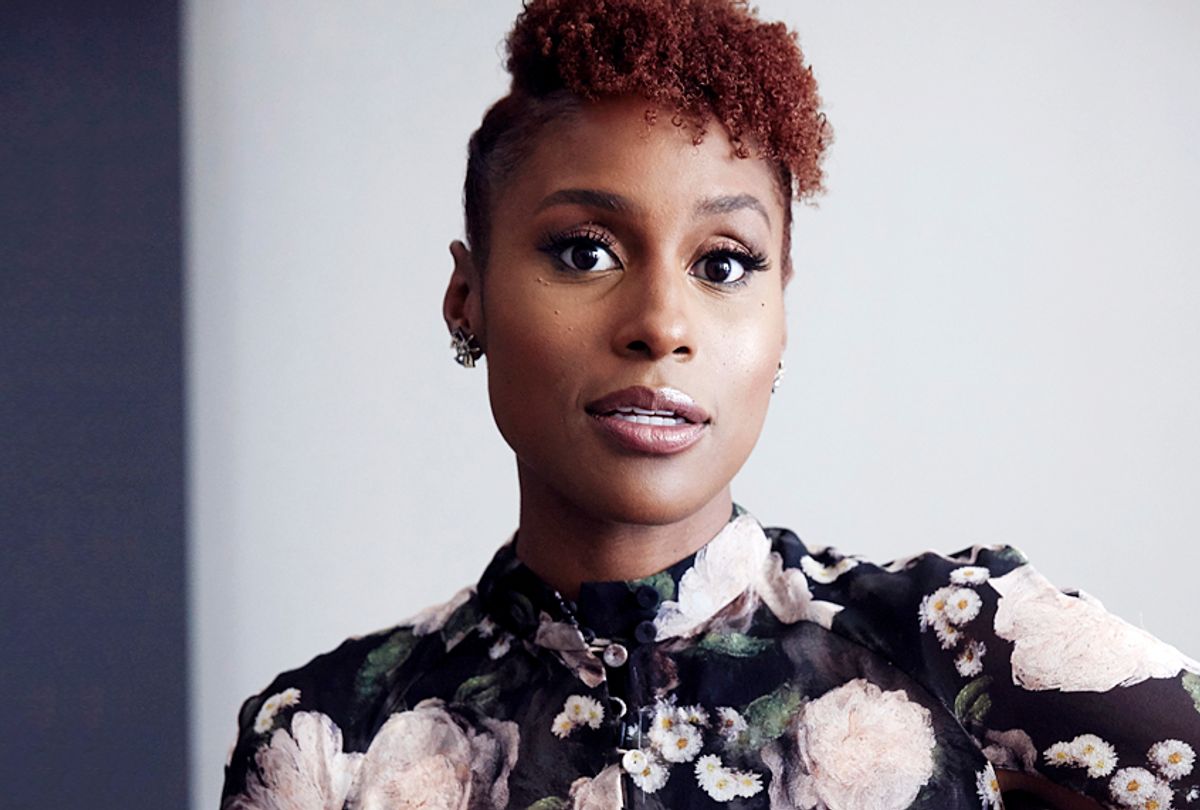 I met Issa Rae, the creative force behind HBO's acclaimed comedy series "Insecure," at a fancy hotel in midtown Manhattan. The Emmy-nominated actress has reached a level of fame that is, in many ways, intimidating to a young journalist. But more so, Rae's incredible body of work, her ability to distill and relay authentic stories for TV with a predominantly black cast, as well as her candor during interviews and on red carpets, has elevated Rae to champion status for young people and for communities of color. So I was grateful that when she walked into the hotel room for this interview, she brought a bottle of champagne.

Rae wore a gorgeous cream jumpsuit; her hair and makeup were flawless, yet she was disarming immediately, warm and generous with her attention. Rae's acclaim crosses generations (my mom and my friends were equally as excited for "Insecure's" new season), and even after a day filled with interviews, she remained both present and grounded.

In a wide-ranging interview, I spoke to the "Insecure" creator about her Emmy nomination for lead actress in a comedy series, finding and maintaining her voice and point of view and transitioning to the big screen as part of the forthcoming film "The Hate U Give," based on Angie Thomas' best-selling novel.

"Rooting for everybody black" was an iconic moment at last year's Emmys. Are you excited about this year’s nomination?

Heck yeah, I’m excited. I’m excited that it promotes the show. People see the Emmys who don’t get the chance to watch all of the television, and just to be among the other amazing nominees, it’s just going to bring more attention to the show. It’s just eyeballs, and that is great.

I was reading an interview you did where you talked about the power of passion and purpose and how much you recognize that in up-and-coming creatives. I was wondering, in that vein, what does the ongoing success of "Insecure" mean to you specifically?

I love that it inspires. Specifically, people come up to me all the time — like yesterday I just finished a movie and I was in love with the PAs on that set. They were mostly black women, [and] one white girl and one black dude. And individually, they came up to me to talk about how my story really inspired them and made them feel like they could do it. . . You just never know who’s watching and you never know what people get out of certain stories.

I was so impressed by their professionalism, their vibe. I can’t wait to see what they do in the industry. To have them come up to me at the end to be like, "Yes, we look to you," it’s just so trippy. But I feel proud of that, and I know that right now we’re in such a time where there are so many black creatives, creatives of color, who are taking the reins of their own stories and making sure that other people are walking through that door as well. That’s what’s really exciting to me. That’s what feels different about this time in particular.

A lot of people have described "Insecure" as a love letter to Los Angeles. And certainly, you’ve talked a lot about that love. How did the show strengthen or complicate your relationship to LA?

It’s made me love it so much more. I have such a sense of pride walking through the streets, especially Inglewood, and the fact that the show will ultimately serve as a time capsule to what Inglewood — and South LA — once was because already it’s changing so much. There are already places that we shot that are closed down, that are for lease, that are being renovated for other things. It’s just like, wow, the change is happening so fast that people are going to look back on this and think that [the show] is dated. It could be five years from now. It’s going to be like, "What? That’s what Market street was looking like. Now it’s a promenade and now there’s only white people there." It’s sad, but also we’re capturing the now in a way that really feels special, and that'll go down in history, which is amazing.

Each season has a show within the show that the characters watch. It was so exciting to see Maxine, or Erika Alexander [from Fox's 1990s sitcom "Living Single"]. You see the lineage from Max to Molly, too.

Yeah, absolutely. Seeing Erika Alexander on set — that was directed by Kim Fields [also from "Living Single"]. You know, Ron from "A Different World" was there, Bill Bellamy, all my '90s heroes got together to make this show within a show. It was really, for us, a personal treat. But obviously, we’re just poking fun at the reboot culture right now. Erika Alexander, in particular, was one of the first celebrities to ever recognize me from "Awkward Black Girl."

It felt like a full circle moment to be able to have her in "Insecure" playing this '90s character.

Is that going to be the recurring show throughout the season, about reboot culture? Because it’s always kind of a commentary on a commentary?

Yeah, I mean, we just found it hilarious. I remember at the time they were talking about rebooting "Martin," obviously "Facts of Life," "Roseanne." All these shows — "Will & Grace" — are being rebooted. So we just wanted to have our own version. Sometimes they try to tackle these timely topics, and they do it terribly. We wanted to just have our own version of that.

Speaking of Erika, I was reading an interview she did and she talked about while doing "Living Single," she and the rest of the cast, which was predominantly black, were very aware that they were fortunate, but also they knew that they belonged. That was really profound.

It was so powerful. I’m sure that came from being in a time when there was an abundance of shows like that, which is what I feel like now. I feel like now, we’re not taking "no" for an answer, in terms of we’re not going anywhere. At that time you had "Living Single." You had "Martin." You had "Fresh Prince." You had all these other shows.

"A Different World." You had these shows that were such a staple in our communities, in pop culture communities. So I completely understand that feeling of, we deserve to be here and we’re killing it. That confidence definitely helped influence people like me.

Does that resonate with you now? You've talked about there being this renaissance of creatives of color.

Yeah, I really feel that way. With like the Lenas [Waithe] ("Master of None," "The Chi") and Justin Simien ("Dear White People"), and the Avas [DuVernay], and the Maras [Brock Akil] ("Girlfriends," "Being Mary Jane") and of course, Shonda [Rhimes], who started it off for us, for black women; it does feel like this is our time.

There's this new book out about Lauryn Hill by Joan Morgan, where she explains how Hill let the mainstream come to her, and she refused to alter her blackness in any way when they did. And that reminded me of the story you talked about in GQ with ABC, how the network picked apart your script and it eventually fell apart, and how it taught you a really important lesson about finding and maintaining your voice and point of view.

Yes, I just found that if anything compromises my pride, anything that compromises what I want to represent culturally for black people, for me, then it's not worth it. I hear a lot of stories about people being told to tone things down or to make it appeal to whiter audiences, and there’s so much out there existing that caters to white people, it’s just like, why do I have to? You see unapologetic artists like Donald Glover, even Jordan Peele — despite the subject matter, but it just feels so unapologetically like, "this is my point of view and deal with it, because I’m not changing it for anyone." And it feels like we can at this point.

That’s exciting — the art that’s being made on all these different levels. Ava DuVernay has talked about, it’s not even just film, but what Solange is doing —

Oh, God. Solange does not give any fucks, and I love it.

Have you listened to the new Internet album? ["Hive Mind" debuted July 20.]

Yeah, I love the album. Some of the music is on the show this season. We got to get it early. Syd is just a beast.

Can you talk about the experience of leaving the writer/creator realm and entering film with "The Hate U Give," which is such a powerful story?

To have that be my first film was truly a blessing. Shout out to George Tillman for even just trusting me to take on [the character of] April, but Angie's story is so amazing.

To work with Amandla [Stenberg, who plays protagonist Starr], who really embodied the character and who just killed it — it was so tragic how timely it is. And how it seems like it will always be timely. But just to even see the black female version or the black female plight in something like that. You get to hear, with "Fruitvale Station" and even the Trayvon Martin documentary series, the Mike Brown documentary — you’re hearing about these victims, but you never get to hear about what the witness felt like. Philando Castile, his fiancée, what is she going through? What did she go through? I remember watching so many videos from her just grieving and dealing with this, while the narrative is out there that "he’s a monster and he deserves to die."

But there are just so many stories like that and you never get to really see that perspective and I just think it’s just so well done, and I’m just proud to be a part of it.