Meanwhile, Tom Arnold appeared on "Jimmy Kimmel Live!" and continued to proclaim that the "N-word" tapes do exist 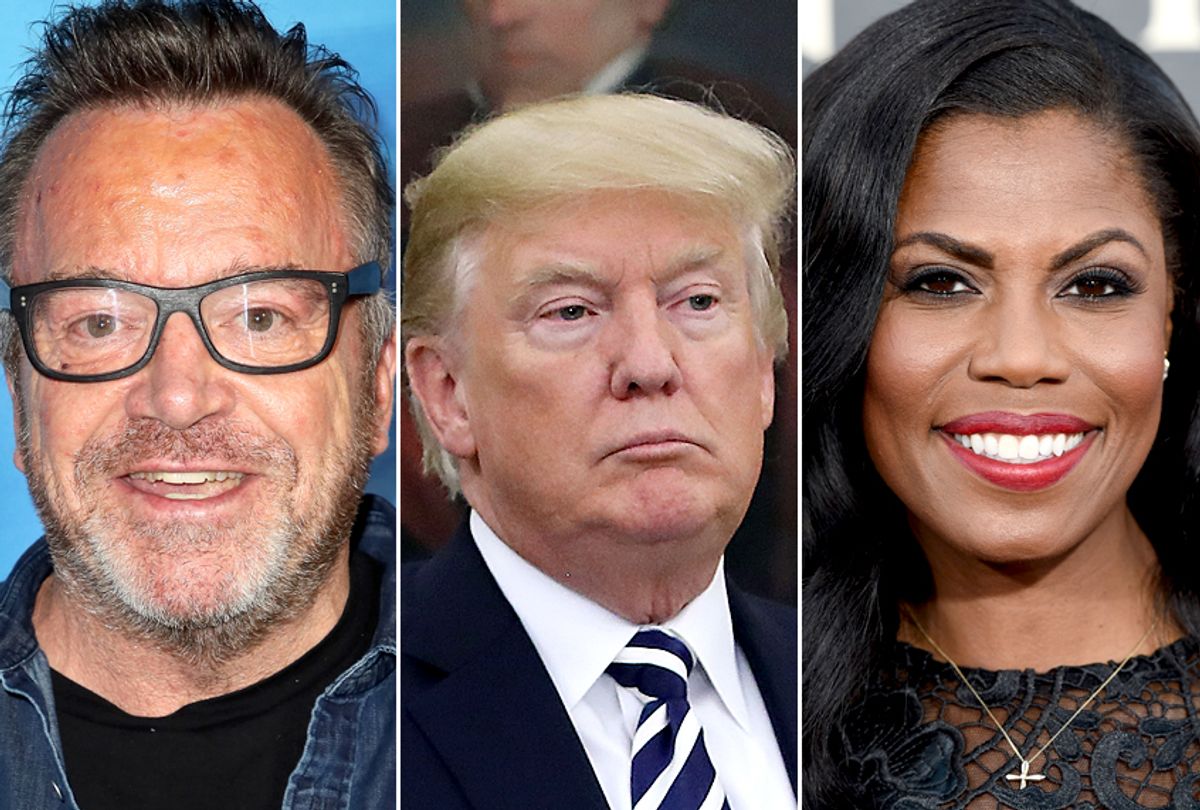 President Donald Trump once said that he was toying with the idea of pitting black contestants against white ones on his NBC reality television show, "The Apprentice." This is what he told Howard Stern during a 2005 radio interview, claiming that "some person" had suggested the concept of "nine blacks against nine whites." Audio of the interview was resurfaced Wednesday by CNN.

"And it would be nine blacks against nine whites, all highly-educated, very smart, strong, beautiful people, right?" Trump told Stern, the host of eponymous "The Howard Stern Show."

Stern questioned whether Trump would enlist "very dark blacks or light-skinned blacks," and Trump responded that there would be an "assortment." However, the white contestants would probably all be blondes, according to Trump.

Stern said that he liked the idea, while his co-host Robin Quivers suspected that Trump would provoke "a riot" if he moved forward with the idea. "Well, it would be the highest-rated show on television," Trump boasted.

"Wouldn't that set off a racial war in this country?" Stern asked. But Trump wasn't worried. "I don’t think. See, actually, I don’t think it would," he said. "I think that it would be handled very beautifully by me."

CNN's unearthing of this 2005 interview adds fuel to the fire in the ongoing debate over whether a tape of Trump using the "N-word" while filming his reality TV show exists. It is a rumor that Omarosa Manigault Newman, the former "Apprentice" star who was fired from the White House revived in her new tell-all memoir, "Unhinged." Trump has denied the claim, writing on Twitter that he does not have "such a terrible and disgusting word" in his "vocabulary."

One person who is determined to release the alleged tape is comedian Tom Arnold, who has a new show debuting on Viceland next month aptly titled, "The Hunt for the Trump Tapes." During an appearance on "Jimmy Kimmel Live!" Wednesday, Arnold explained that he has known Trump for 30 years.

"I have a history with this guy," he said, adding that Trump "begged" him to be a contestant on "The Celebrity Apprentice." "It is such a crappy show that I wouldn't do it," Arnold said. "That says a lot, because I do everything."

Arnold explained that his feud with Trump goes dates to the president's failed "birther" crusade, which launched him into the national political arena. In the years since, Arnold has felt confident that each new scandal would be the one to take this "A-hole" down. But from Trump's racist "birther" campaign against former President Barack Obama to the "Access Hollywood" "grab 'em by the p*ssy" tape, nothing has yet done so. Arnold said that it was around then when he recalled seeing and beginning his search for a "compilation tape" where Trump "says the N-word," and which is now referred to as "the N-word tape."

Arnold added that since he has come forward claiming that this N-word tape exists, neither the president or Mark Burnett, the creator of "The Apprentice," have called him a liar, "because they know it's true."

"They absolutely know it's true," he told Kimmel. This directly counters the president's tweet claiming that Burnett called him to assure him "there are NO TAPES of the Apprentice where I used such a terrible and disgusting word as attributed by Wacky and Deranged Omarosa."

Still, Arnold was relentless, insisting that Kimmel and everyone else will hear this tape soon. "You keep saying you will. When? When he’s like, retired?" Kimmel questioned.

It's a question that Arnold couldn't answer. But he told Kimmel, "Here’s the truth about Donald Trump that I’ve known from day one," Arnold said, "He is incompetent. He’s not even the smartest Trump on the ['Apprentice'] set. And Mark Burnett has protected him, because he won't release that tape."

However, Arnold is confident that, if the American people saw just one day of footage from the taping of "The Apprentice," they would realize that that is exactly what is happening in the White House. "He’s incompetent, he is racist, he sexually harasses people," he said.

Arnold is aware that with no public tape, there will continue to be skepticism, in spite of the president's well-documented history of racism and alleged sexual harassment and abuse. But, at the end of the day, Arnold said, "The fact that I am involved in such a big way with the president tells you that he should not be president."

Could this scenario take down Trump?

The case for impeachment.