Diamond & Silk attack the American media on "Fox & Friends": "They are the enemy of the people" 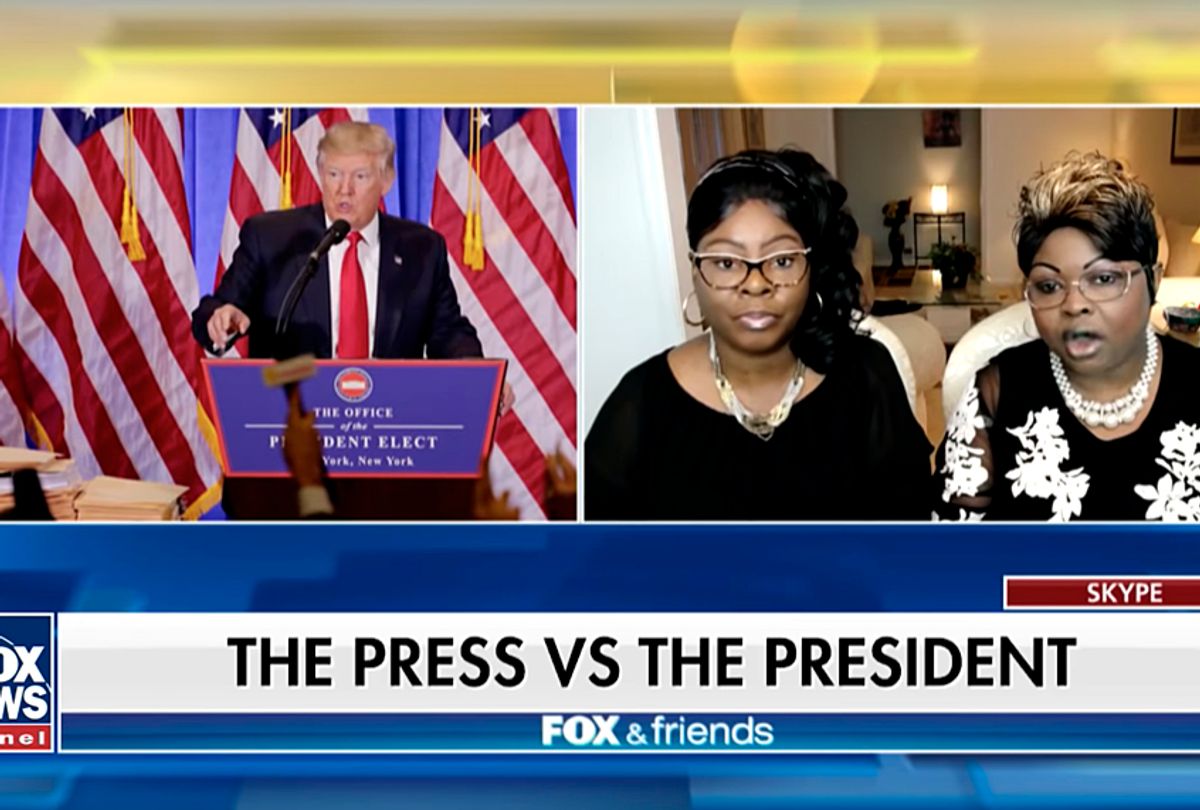 After more than 300 newspapers across the country united to denounce President Donald Trump's claim that the media is "the enemy of the people," the commander-in-chief unsurprisingly could not help but bite back at an industry that has long been considered to be the cornerstone of American democracy. Now his minions in the media, namely Fox News figures, are following suit.

First, came the expected attacks on Twitter, targeted at the lead organizer of the #FreePress campaign: the Boston Globe.

"The Boston Globe, which was sold to the the Failing New York Times for 1.3 BILLION DOLLARS (plus 800 million dollars in losses & investment), or 2.1 BILLION DOLLARS, was then sold by the Times for 1 DOLLAR," Trump tweeted. "Now the Globe is in COLLUSION with other papers on free press. PROVE IT!"

In a separate tweet, the president insisted that there was actually nothing more he wanted for the country than "true freedom of the press."

"The fact is that the Press is FREE to write and say anything it wants, but much of what it says is FAKE NEWS, pushing a political agenda or just plain trying to hurt people," he continued. "HONESTY WINS!"

Trump then followed up his tweets by bullying pool reporters who had been assigned to cover his recent Cabinet meeting. "If you'd like, you can stay," Trump said, seemingly extending his invitation to stay for the entire gathering. "Or if you'd like, you can also leave. Don't forget: freedom of the press."

In the almost always positive opinion of Trump given by "Fox & Friends," the president had, in fact, risen to the occasion against the so-called liberal elite media. (Notably, the commentators did not stand up for their peers – the journalists at Fox News like Shephard Smith.)

"The Boston Globe . . . they reached out to newspapers all across the country and they said we need to call on the president to stop attacking the press," co-host Ainsley Earhardt explained. "So the president said, 'Come on to this Cabinet meeting, we'll have freedom of the press.'"

Earhardt then invited a pair of ardent Trump supporters, the conservative commentators Diamond & Silk, to "come on" to the president's favorite morning show and share their hate-filled thoughts about the non-Fox News media, coming dangerously close to inciting violence.

"Here's what the media don't get," Diamond began after applauding Trump. "The media don't understand that we are behind our president. We stand behind him 100 percent. And when he talks about the media, he's telling the truth."

And, with that, the pair verged into Alex Jones territory.

The InfoWars conspiracy theorist was given a seven-day timeout from Twitter this week after urging his followers to ready their “battle rifles” against the mainstream media. Although they did not personally issue a call to arms, Diamond & Silk nonetheless encouraged their followers to hate the media and joined Trump in slamming journalists as "the enemy of the people."

And Diamond did not stop there.

"Whenever you take and you put out a lie and not give us the facts, you can create all kinds of chaos in our country," Diamond said to the media. "That's what makes you the enemy to the people. You are supposed to report the facts – not salacious gossip, not disparaging somebody, or vilifying somebody or trying to destroy their reputation."

The "Fox & Friends" cast then pivoted away from their daily dose of media bashing to cover the controversial comments made by New York's Democratic Gov. Andrew Cuomo.

"We're not going to make America great again," Cuomo, who faces a buzzy primary battle against former "Sex and the City" star Cynthia Nixon in September, recently said. "It was never that great," he concluded in a clip that was quickly seized upon by right-wing media.

"According to Google, he's worth $5 million," Diamond began on Thursday. Fact check: Google is not a news source, and running a simple search on the platform is not in it of itself a thorough vetting of facts.

Still, she continued: "So how hasn't America been great for him?"

"And here's my theory, if he don't like America – and if he feel like America cannot be great, greater than we've ever seen it before – he needs to pack his rags and he needs to go to another country."

"I don't know what he was trying to do, but he made himself look stupid," Diamond later added.

These comments can be filed under: "disparaging somebody or vilifying somebody," in this case, one's political enemy.

Click here to watch the full segment from Friday's broadcast of "Fox & Friends."