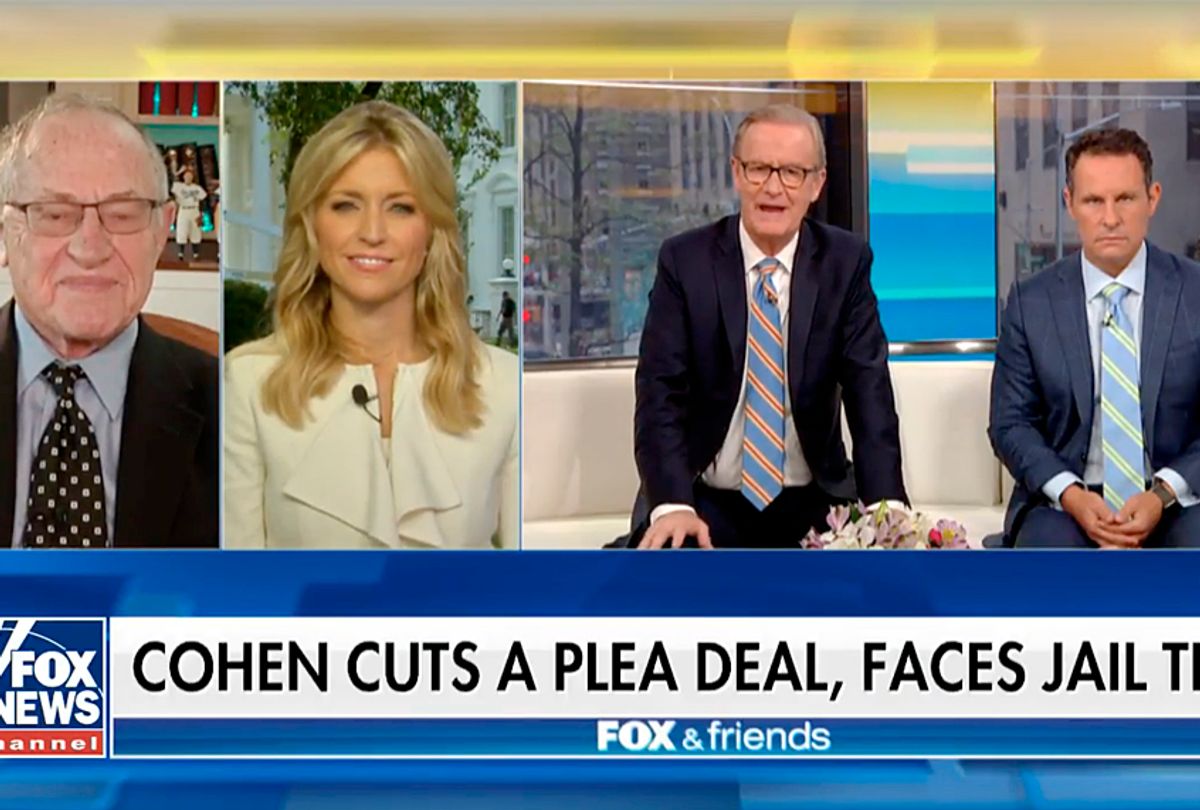 President Donald Trump's favorite morning show, "Fox & Friends," was exploring the possibility that Trump could pardon Michael Cohen, the attorney who spent many years working as the commander-in-chief's personal "fixer," one day after his astonishing admission of violating federal campaign finance laws.

In a deal with federal prosecutors, Trump's former "fix-it-guy" pleaded guilty to eight criminal counts and implicated Trump himself. Cohen admitted that he paid off adult-film actress Stormy Daniels "in coordination and at the direction of a candidate for federal office," referring to Trump, during the 2016 presidential campaign in order to squash reports about her alleged fair with Trump. He also pleaded guilty to multiple counts of tax evasion, bank fraud and making false statements regarding a credit decision.

On Wednesday morning, "Fox & Friends" co-host Brian Kilmeade slammed Cohen's lawyer Lanny Davis, who defended former President Bill Clinton against multiple scandals in the 1990s, for stating that Cohen would "under no circumstances" accept a pardon from Trump.

"When it comes to Michael Cohen, inexplicably, he went out for Lanny Davis," Kilmeade said. "Lanny Davis is all about him and the reputation of Hillary Clinton. Case in point: He was just on another network. Instead of talking about what's best for Michael Cohen, he's talking about attacking Donald Trump and not accepting a pardon?"

Trump's longtime personal attorney has been under criminal investigation for some time regarding his personal financial dealings. This investigation placed Cohen under immense pressure in the Southern District of New York, while special counsel Robert Mueller continues his separate investigation into Russian meddling in the 2016 presidential election. (Some of the evidence incriminating Cohen was reportedly uncovered by Mueller's investigators, who then handed it over to federal prosecutors.) If Cohen agrees to cooperate with federal investigators as part of his plea deal, it is possible that the information he provides could also assist Mueller's ongoing investigation into alleged collusion between Trump's 2016 campaign and Russian agents.

It is not yet clear whether Cohen has decided to cooperate. Earlier this month, Cohen indicated that his loyalty to Trump might be wavering, telling ABC News he would "put my family and country first" before the president. "My wife, my daughter and my son have my first loyalty and always will. I put family and country first," Cohen told ABC’s George Stephanopoulos.

In April, Trump denied any knowledge about Cohen's payments to women. However, a secretly taped recording of a 2016 conversation between Trump and Cohen released by Davis, suggests the president was more aware of the payments than he has indicated.

After Cohen's plea deal, Giuliani doubled-down on the claim that Trump has nothing to do with the payouts. "There is no allegation of any wrongdoing against the president in the government's charges against Mr. Cohen," Giuliani said in a statement, according to The New York Times. "It is clear that, as the prosecutor noted, Mr. Cohen's actions reflect a pattern of lies and dishonesty over a significant period of time."

The president also lashed out at Cohen on Twitter Wednesday morning, writing: "If anyone is looking for a good lawyer, I would strongly suggest that you don't retain the services of Michael Cohen!"

Months ago, Trump came to Cohen's defense, calling him a "fine person with a wonderful family." "Michael is a businessman for his own account/lawyer who I have always liked & respected," the president tweeted in April.