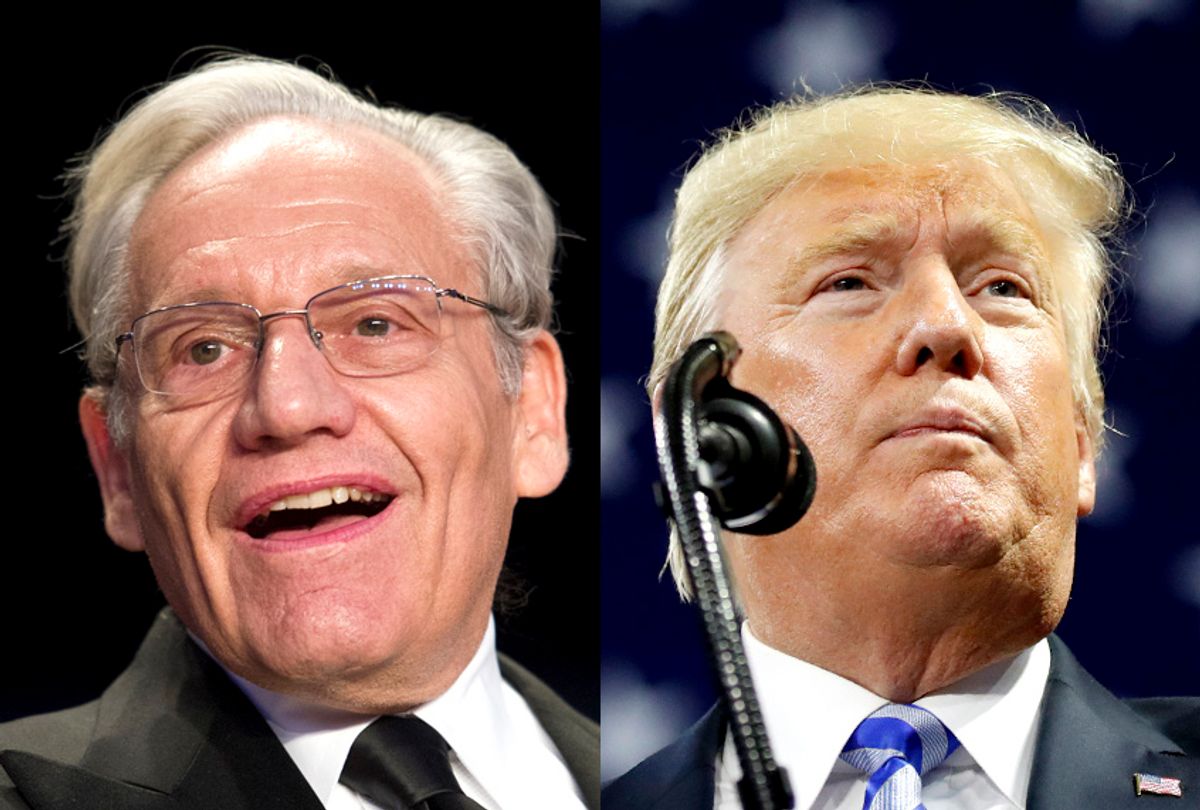 Bob Woodward's new book about President Donald Trump's White House is called "Fear," and details about its contents in a new report by The Washington Post suggest that title might also describe the reaction being felt in the Oval Office about its impending release.

The book — which is based on first-hand interviews with Trump White House employees and which Trump refused to contribute to while it was being written (he later called Woodward to ask to participate after the manuscript had been finished and complained it would be a "bad book" without his involvement) — describes a White House in which staffers regularly fight amongst each other, qualified policy experts hold a dim view of the president's intellect and an aura of misery abounds.

On one occasion, for example, the book apparently describes Trump's ignorance of the military presence in the Korean peninsula and America's relationships with the nations of North and South Korea.

At a National Security Council meeting on Jan. 19, Trump disregarded the significance of the massive U.S. military presence on the Korean Peninsula, including a special intelligence operation that allows the United States to detect a North Korean missile launch in seven seconds vs. 15 minutes from Alaska, according to Woodward. Trump questioned why the government was spending resources in the region at all.

After Trump left the meeting, Woodward recounts, “Mattis was particularly exasperated and alarmed, telling close associates that the president acted like — and had the understanding of — ‘a fifth- or sixth-grader.’ ”

In Woodward’s telling, many top advisers were repeatedly unnerved by Trump’s actions and expressed dim views of him. “Secretaries of defense don’t always get to choose the president they work for,” Mattis told friends at one point, prompting laughter as he explained Trump’s tendency to go off on tangents about subjects such as immigration and the news media.

Another section describes how Trump's daughter Ivanka, despite lacking any policy qualifications, made it clear that she views herself as more important than other White House staffers.

“You’re a goddamn staffer!” Bannon screamed at her, telling her that she had to work through Priebus like other aides. “You walk around this place and act like you’re in charge, and you’re not. You’re on staff!”

Ivanka Trump, who had special access to the president and worked around Priebus, replied: “I’m not a staffer! I’ll never be a staffer. I’m the first daughter.”

There are a couple of surprising moments involving Gary Cohn, who served as Trump's Director of the National Economic Council before resigning in 2018. At one point, the book describes how Cohn would resort to subterfuge in order to sabotage economic policies being pushed by Trump that he thought were bad.

Cohn, a Wall Street veteran, tried to tamp down Trump’s strident nationalism regarding trade. According to Woodward, Cohn “stole a letter off Trump’s desk” that the president was intending to sign to formally withdraw the United States from a trade agreement with South Korea. Cohn later told an associate that he removed the letter to protect national security and that Trump did not notice that it was missing.

Cohn made a similar play to prevent Trump from pulling the United States out of the North American Free Trade Agreement, something the president has long threatened to do. In spring 2017, Trump was eager to withdraw from NAFTA and told Porter: “Why aren’t we getting this done? Do your job. It’s tap, tap, tap. You’re just tapping me along. I want to do this.”

Under orders from the president, Porter drafted a notification letter withdrawing from NAFTA. But he and other advisers worried that it could trigger an economic and foreign relations crisis. So Porter consulted Cohn, who told him, according to Woodward: “I can stop this. I’ll just take the paper off his desk.”

The book reportedly describes a colorful conversation between Cohn and Trump's chief of staff, John F. Kelly. The exchange occurred after Cohn submitted a letter of resignation to the president in protest over the president's avowed sympathy for white nationalists following the Charlottesville protests. (Cohn is Jewish.)

When Cohn met with Trump to deliver his resignation letter after Charlottesville, the president told him, “This is treason,” and persuaded his economic adviser to stay on. Kelly then confided to Cohn that he shared Cohn’s horror at Trump’s handling of the tragedy — and shared Cohn’s fury with Trump.

“I would have taken that resignation letter and shoved it up his ass six different times,” Kelly told Cohn, according to Woodward. Kelly himself has threatened to quit several times, but has not done so.

Kelly has also apparently made it clear that he hates his job working for Trump and views the president as unfit.

White House Chief of Staff John F. Kelly frequently lost his temper and told colleagues that he thought the president was “unhinged,” Woodward writes. In one small group meeting, Kelly said of Trump: “He’s an idiot. It’s pointless to try to convince him of anything. He’s gone off the rails. We’re in Crazytown. I don’t even know why any of us are here. This is the worst job I’ve ever had.”

According to the report, Trump also misunderstood basic details about the military background of Sen. John McCain, a Republican critic of the president who Trump once claimed wasn't a war hero because he had been captured.

At a dinner with Mattis and Gen. Joseph F. Dunford Jr., the chairman of the Joint Chiefs of Staff, among others, Trump lashed out at a vocal critic, Sen. John McCain (R-Ariz.). He falsely suggested that the former Navy pilot had been a coward for taking early release from a prisoner-of-war camp in Vietnam because of his father’s military rank and leaving others behind.

Mattis swiftly corrected his boss: “No, Mr. President, I think you’ve got it reversed.” The defense secretary explained that McCain, who died Aug. 25, had in fact turned down early release and was brutally tortured during his five years at the Hanoi Hilton.