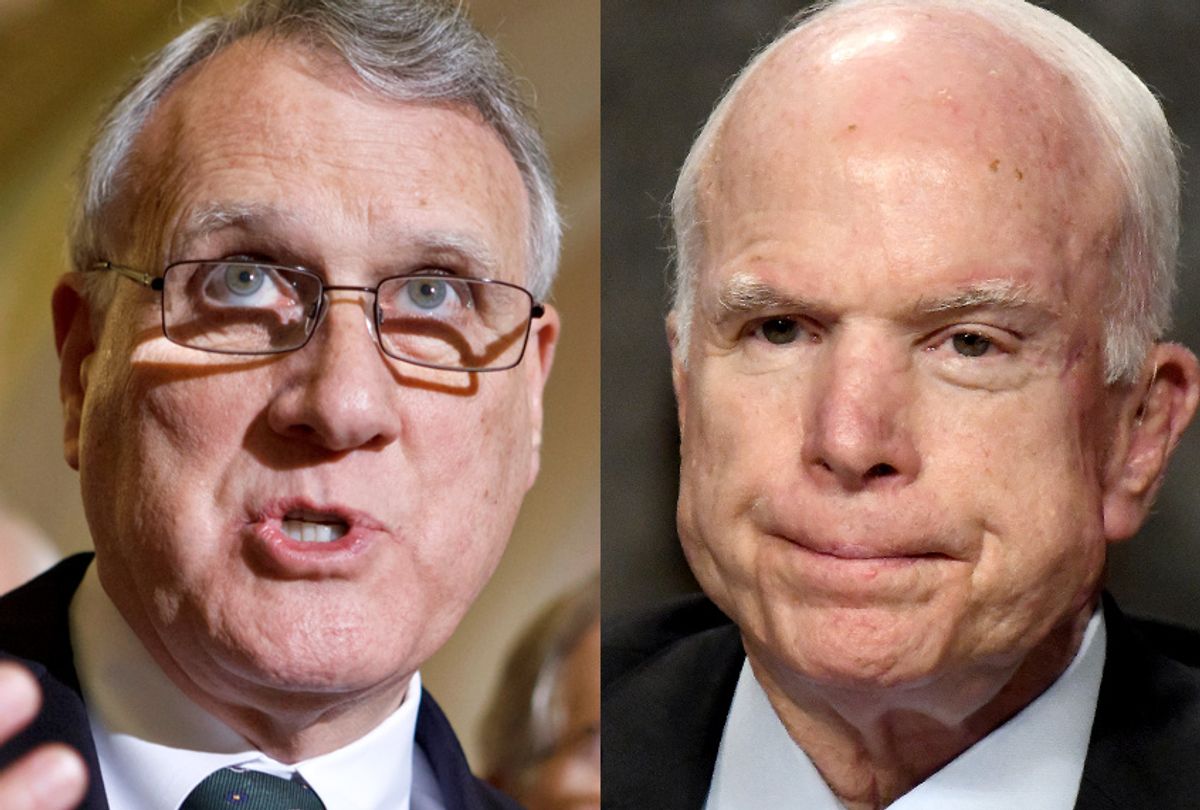 "There is no one in Arizona more prepared to represent our state in the U.S. Senate than Jon Kyl," Ducey said in a statement. "He understands how the Senate functions and will make an immediate and positive impact benefiting all Arizonans. I am deeply grateful to Senator Kyl for agreeing to succeed his friend and college of so many years."

"Every single day that Jon Kyl represents Arizona in the United States Senate is a day when our state is being well-served," he added.

Kyl, who represented Arizona in the Senate for nearly two decades before retiring in 2013 after rising to become the second-highest ranking Republican senator, was recently tapped to guide President Donald Trump's Supreme Court nominee Judge Brett Kavanaugh through his Senate confirmation hearings. His appointment means he will now have a vote on the judge's confirmation to the nation's high court.

At Tuesday's conference, Ducey indicated that Kyl is committed to serve through the end of the year, although he hopes Kyl would serve longer. Ducey said it is not clear whether Kyl would remain in the Senate until 2020, when a special election will be held to fill McCain's unexpired term. If Kyl steps down after the end of the session, Ducey would be required to appoint another replacement, The Arizona Republic reports.

Kyl has indicated he would not run for re-election, which means Democrats would potentially have a shot at flipping the seat. There is already a contentious race between U.S. Reps. Martha McSally (R-Ariz.) and Krysten Sinema (D-Ariz.) to fill the seat being vacated by retiring Sen. Jeff Flake (R-Ariz).

"I haven't been able to get that assurance from Sen. Kyl yet. What I have gotten is a commitment to serve Arizona through at least this session of Congress, and it's my hope that he serves longer," Ducey said. "I'm hoping that the senator will consider serving longer."

"I have committed to serving at least through the second session of the 115th Congress," Kyl added. "I do know I will not seek this seat in 2020, nor any other office in the future."

McCain's successor will fly to Washington, D.C., after Ducey's announcement. Kyl could be sworn in as early as Tuesday night, a governor's aide told the Arizona Republic.

Kyl is expected to be a more reliable vote for Trump than McCain. While the late senator largely voted along party lines, he notably drew the president's ire when he broke with the vast majority of Republicans by opposing an effort last year to repeal the Affordable Care Act.

McCain's widow, Cindy McCain, praised the selection of Kyl on Twitter, calling him "a dear friend of mine and John's."

"It's a great tribute to John that he is prepared to go back into public service to help the state of Arizona," she said.

Republican Sen. Jeff Flake of Arizona also expressed support for Kyl's appointment on Twitter, saying there is "no one more qualified."

"Governor Ducey has selected Senator Jon Kyl as Senator McCain's replacement. What an excellent choice!" Flake tweeted. "There is no one more qualified and Arizona is well served. Kudos to Senator Kyl for his willingness to serve once again."