Can "Law & Order: Hate Crimes" work in the era of Trump and Black Lives Matter?

In Dick Wolf's criminal justice system, cops are always the good guys, and the stories are stubbornly apolitical 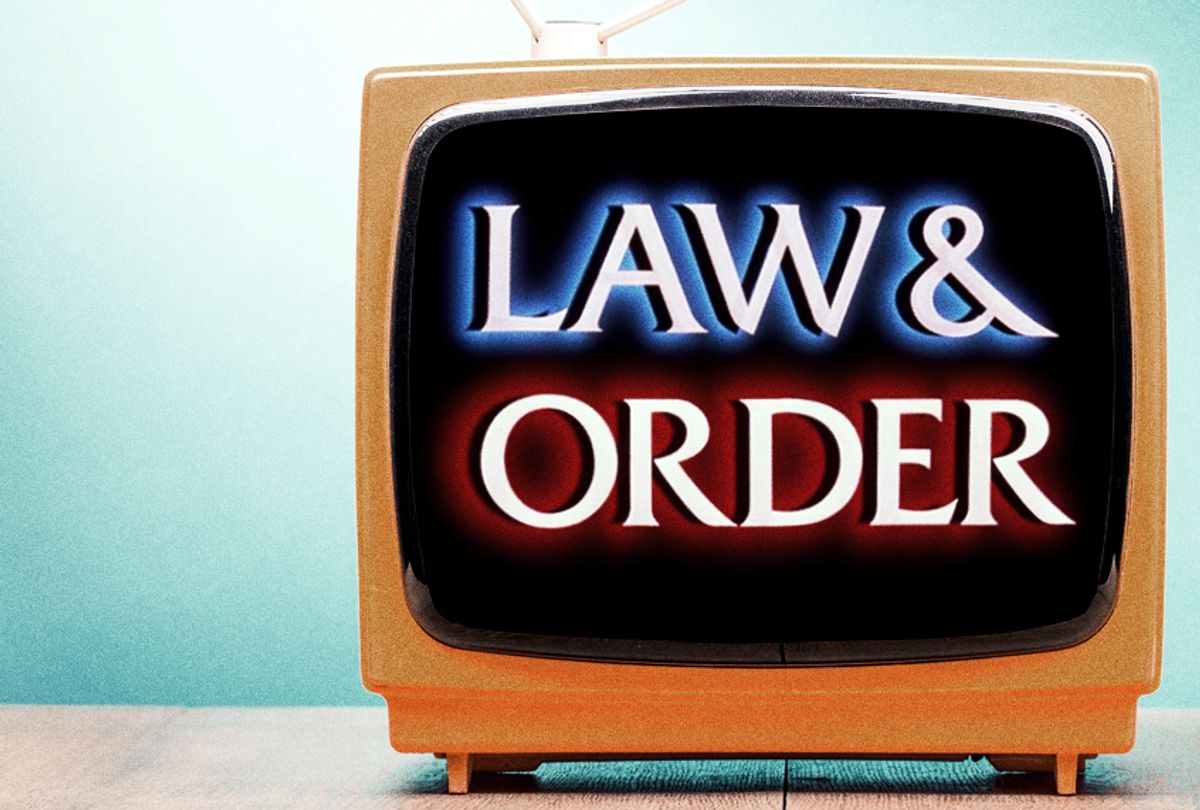 It is with great curiosity and no small amount of trepidation that we inform you that NBC has given a 13-episode order to “Law & Order: Hate Crimes,” yet another Dick Wolf branded procedural.

We have no personal bones to pick with one of the industry’s most prolific generators of crime and justice TV stories, understand. Rather, our concern has to do with how Wolf plans to approach the fraught and thorny subject of bias crimes, and how such an interpretation may play to and with the audience, impacting their understanding of how the justice system handles such cases.

With Wolf’s work, the answer is never entirely cut and dried, although a number of viewers may express sheer distaste for Wolf’s oeuvre for entirely defensible reasons.

According to NBC’s press announcement, released Tuesday, “Law & Order: Hate Crimes” is set in New York City, “where crimes motivated by discrimination are vigorously investigated by an elite, specially trained team of investigators. Going behind the headlines and viral videos, these diverse, dedicated and passionate detectives will stop at nothing to bring these criminals to justice.”

In May, the Center for the Study of Hate and Extremism at California State University, San Bernardino released new data indicating that in 2017, hate crimes have risen 12.5 percent over 2016 levels in 38 of the largest cities. All told, 1,038 hate crimes were committed in the nation’s 10 largest cities, the highest number in more than a decade.

This makes “Law & Order: Hate Crimes” a timely and on-brand proposal. But the question is in the execution of these new plots, and specifically how ardently this spinoff will purvey a skewed image of justice’s inner workings, as is the tendency of Wolf’s other work.

“Law & Order” and its most successful spinoff, “Law & Order: Special Victims Unit” are popularly cited as serving an educational purpose, even though Wolf insisted to reporters a month ago at the Television Critics Association’s press tour that this was never his goal.

That particular press event was not about “Hate Crimes” but in support of his upcoming CBS series “FBI,” launching on Tuesday, September 25. Regarding that series, Wolf was asked whether this series is in some ways designed to change hearts and minds, given the negative political rhetoric directed toward the Federal Bureau of Investigation by none other than the President of the United States.

“I don’t know if it’s an educational effort, any more than ‘Law & Order’ was an effort to teach the law to people,” Wolf said then. “I tell stories, and [Wolf Entertainment] is an entertainment company. It’s not a political PAC.”

Intent can be entirely different than result and impact, a truth of which Wolf must surely be aware after creating more than a thousand hours of television, not to mention countless references to his flagship show’s role in enlightening viewers about Miranda rights and other helpful bites of legalese.

One example comes in 2011’s “Horrible Bosses,” when Charlie Day’s character Dale cites his addiction to “Law & Order” as the reason he’s able to talk himself and his friends out of being questioned by cops in a murder case.

Surely, too, the producer takes pride in the various academic studies conduced over the years affirming the role "SVU" plays in partially lowering rape-myth acceptance and education surrounding consent. Members of its cast appear in PSAs about consent and sexual assault education that air alongside episodes of “SVU” and its syndicated repeats. Series star Mariska Hargitay, who plays New York Police Department Lieutenant Olivia Benson, produced a documentary on the nationwide backlog of untested rape kits, “I Am the Evidence,” which aired on HBO in April.

Less frequently referenced is the Wolf universe’s penchant for presenting idealized portrayals of the justice system — not necessarily with regard to the verdicts seen in the open-and-shut, one-and-done cases popularized in “Law & Order” and its ilk, but the tendency of its enforcement agents to be unerring in their behavior and judgment. The various "Law & Order" series, along with "CSI" and "NCIS," have been cited in a number of studies conducted over the years for producing in their audiences more conservative views of the criminal justice system and a higher likelihood of overestimating the rate and prevalence of violent crime in the United States.

Wolf’s franchises focus on the heroes, mostly leaving demonstrations of institutional villainy to its politicians, journalists with a bent toward sensationalism and defense attorneys with a knack for exploiting technicalities. The “SVU” detectives have solved numerous cases over the show’s two decades, but only last year was there a special episode on the untested rape kit backlog. This is in reference to the actual, real world problem involving scores upon scores of untested rape kits sitting in crime lab storage facilities and police departments across the country.

“SVU” isn’t to blame for that, of course. But its efficient depiction of crime-solving may inadvertently bolster the myth that pursuing justice for sexual assault victims is a priority among police. The rape kit backlog, numbering in the ballpark of hundreds of thousands and accumulating over many years, tells a different story.

“I’ve probably spent more time with cops than anybody who doesn’t have a badge. I like them. 99.8 percent of them become cops to help people,” Wolf told reporters. “And, yeah, there are bad cops . . . but the overwhelming majority of these people are out there on the street every day putting their lives in danger and not getting paid very much money.”

Another reason Wolf’s formula has been so successful is that he consciously makes an effort to keep politics out of his storylines. Or, at least, that’s what he says.

“If you go back over the years, you can’t find many episodes of any show that I’ve done that is politically oriented, because, no matter what you’re doing, if you do that, 50 percent of the audience is pissed off from the first frame,” he told reporters in early August.

(At that same press conference, when asked why “FBI” wasn’t airing on NBC alongside “SVU” and his three Chicago based procedurals, Wolf replied: “Here’s the most honest answer I can give you: There was no more beachfront real estate at NBC.”  What a difference a month can make!)

Although Wolf is correct to remind us that his series are fiction, they draw plot threads from real cases. Hence his successful packaging of the “ripped-from-the-headlines” leitmotif. And the current headlines about racial injustice are nothing if not political.

From the various racist dog-whistles coming from the highest strata of government to the idiotic protest conflagrations of athletic shoes in reaction to Nike's choosing Colin Kaepernick as its latest spokesperson, overt and institutionally supported bigotry is as political as it has ever been.

And racially-charged criminal cases in the real world are not simple stories to tell. Nor do they often culminate in happy or satisfactory results, especially in cases where the accused are law enforcement officials. Despite whatever the “elite, specially trained team of investigators” is able to achieve on “Hate Crimes,” this factor is going to test the Wolf formula in a new way.

After all, the simplicity of the “Law & Order” brand, and its binary formula of heroic police vs. corrupt perpetrator is one of the reasons Wolf will have some version of his shows in circulation until the sun burns down to an ember. They give us a sense that the system works and justice can be served.

“Special Victims Unit," is now tied with its progenitor and “Gunsmoke” as the longest running scripted filmed series in the history of television. His Chicago-based series, “Chicago Fire,” "Chicago P.D." and “Chicago Med,” are all chugging along on NBC.

On the other hand, Wolf’s scripted attempt to capitalize on the true-crime craze, the 2017 limited series “Law & Order True Crime: The Menendez Murders,” enjoyed only modest ratings, proving that while the umbrella brand may be strong, the focus is what matters.

True crime still has legs as a TV trend, although its ability to draw viewers has faded significantly since the debut of series such as 2015’s “The Jinx” and Ryan Murphy’s scripted miniseries “The People v. O. J. Simpson: American Crime Story” in 2016.

“Hate Crimes” has only just been announced and was greenlighted in no small part due to the storytelling opportunity afforded by the uptick of race-related violence in America. We don’t see that tide abating anytime soon, and certainly not before the introduction of these new crimefighters which, according to NBC, will occur in the latter part of the upcoming season of “SVU.”

Activist Darnell Moore looks back on the movement five years following its creation.