Guys: Brett Kavanaugh? Let's face it, he's one of us. So what do we do about it

Brett Kavanaugh represents American manhood in its blandest, most morally diminished and most dangerous form 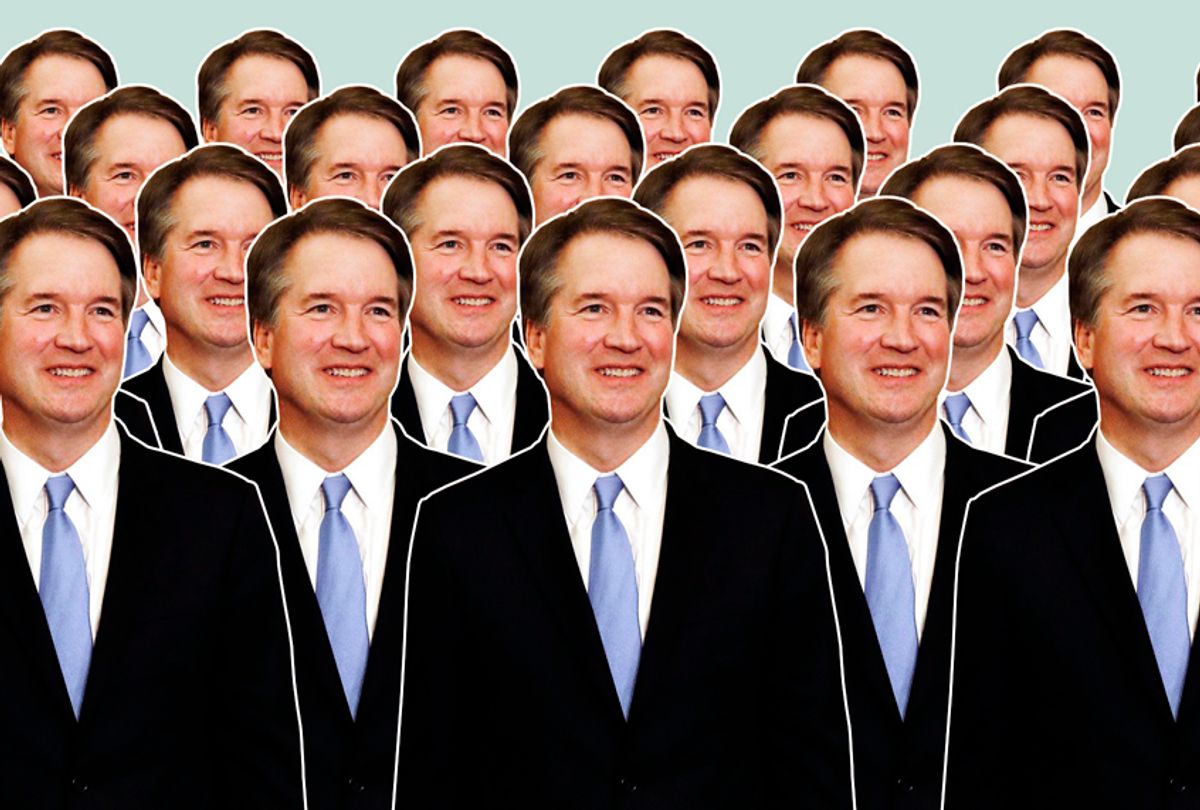 Let me observe the appropriate ritual and state that I don’t know what did or didn’t happen between Brett Kavanaugh and Christine Blasey Ford at a drunken suburban party in 1982, and neither do you. It seems wildly unlikely that a woman would come forward 36 years later and make up such a story, at considerable risk to her health and privacy, but I suppose we have to allow for some of the hypotheticals Kavanaugh’s defenders keep throwing around: She is “mistaken,” she is delusional, she is grossly exaggerating, she felt jilted at age 15 and is seizing an opportunity for revenge in her 50s.

I feel dirty even repeating those desperate, contradictory and profoundly unnecessary alternate theories, and I should. I don’t know whether Brett Kavanaugh tried to rape someone, but I do know how, as Salon's Amanda Marcotte recently observed, how disgusting and hypocritical it is that we are supposed to act shocked at the very idea. I mean, look at the guy — and his beautiful family! It’s unimaginable. Surely he would never!

I know that most American men who either come from that Brett-style background of affluence and privilege and expensive educations and leafy suburban streets where on summer afternoons the sprinklers go around, chut-chut-chut, ch-ch-ch-ch-ch, or who have at least encountered it as visitors (and a whole of women who know that world too), can’t even look at that guy now without a vomitous feeling of recognition.

We all have Brett Kavanaughs in our past, in our yearbooks, in our Facebook feeds. (By “we” and “all,” I do not literally mean everybody, of course. I mean the subset of male humanity likeliest to believe that it represents everybody else.) We heard stories about stuff like that happening at parties like that and decided not to believe them, or if we had first-hand knowledge that they were true we consigned them to the memory hole, where things that are not talked about disappear. Maybe we congratulated ourselves on not having done those things ourselves and not approving of them, or on listening sympathetically to our female friends, always with the slightly sick knowledge that that wasn’t nearly enough. Do we all have Brett Kavanaughs within, however squashed and suppressed, struggling to get out? Painful as that is to contemplate, it’s a fair question.

Gentlemen, Brett Kavanaugh is one of us. More than that, in a certain sense, he is us. What I mean is that in his very Republican blandness, the process of self-erasure and self-reinvention by which the boorish suburban prep-school kid and preening Yalie becomes a paragon of virtue, a “basketball dad” with a replicant wife and die-stamped retro-children, his “Handmaid’s Tale” ideology stuffed into vaguely wholesome packaging like the fake whole-wheat bread at the supermarket — in all those ways and more, Brett Kavanaugh represents idealized American manhood, in its most downsized and degraded contemporary form.

Boys keep swinging. Boys get away with things — as long as they are boys of the right skin color, with the right kinds of parents and the right degree of entitlement. Boys, if they are those kinds of boys, do things that are forgotten about or swept under the antique Persian carpet or decreed not to matter, and those things do not impinge their future life choices or limit their ability to become upstanding and accomplished men who, by universal acclamation, could never have done those things.

Everyone understands this is an elaborate fiction, especially (I’m sorry to say) the mothers and sisters and girlfriends and wives who do a great deal to construct and maintain it. But one of the most important elements of the fiction is to feign shock and disbelief at any suggestion that it might not be reality.

Whether Brett Kavanaugh drunkenly assaulted a girl years ago, and whether that should disqualify him from a seat on the Supreme Court, will never be answered to everyone’s satisfaction. (It would be conventional to say that only two people know the truth; given the accounts of Kavanaugh’s teenage drinking, the real number may be smaller than that.) But what Brett Kavanaugh represents as a member of a class was obvious from the beginning, and is now unavoidable. I don’t generally care for the term “toxic masculinity,” which feels faddish and imprecise. But it couldn’t have a more perfect poster boy.

Rape and sexual assault are common to all nations and all social classes, unfortunately, and often go unreported or unpunished. I doubt we can claim that the American elite, even during its collective cocaine high of the Reagan years when Brett Kavanaugh was in high school, nurtured those crimes in disproportionate fashion. What it did nurture, and still does, is a vast enterprise of mendacity: Young men are encouraged to channel their misogynistic or violent impulses, first into late-night drunken encounters that no one talks about afterwards, and then into highly respected adult careers of predatory viciousness, perhaps on Wall Street or, as in Kavanaugh’s case, in retrograde “conservative” politics drenched in sentimental fantasy and pseudo-high-minded legal language.

Brett Kavanaugh was born and raised to be what he is now — a mystic knight of the old order, fighting to anchor the privilege and power of his class by undoing decades or centuries of progress and returning to an imaginary era of prelapsarian American perfection. Terrifyingly, he seems sincere, or at least like a person who has convinced himself of his own sincerity. I doubt he has any idea why he believes what he believes — in other words, that his so-called principles were conditioned by every aspect of his privileged childhood and privileged education.

Christine Blasey Ford’s accusations against Kavanaugh, and his denials, must be considered in that light. Even Kavanaugh’s most avid defenders know that the allegations are plausible, and don’t care; they know perfectly well that prep-school boys do things like that every Saturday night. But they must behave as if they found them both preposterous and appalling, leading to the cognitive dissonance of Kathleen Parker’s “doppelganger” column in the Washington Post, or right-wing lawyer Ed Whelan actually implicating another Kavanaugh classmate as the likely offender.

Brett Kavanaugh faces a different but related form of cognitive dissonance: He may remember that he kind of, maybe, tried to get with that one girl that one time when she didn’t seem into it. He may remember doing that with lots of girls and getting away with it. He may be troubled by the fact that he can’t remember. But he has fully committed to the Phase 2 narrative of his life, in which he is a family man of immense moral rectitude and unshakable principle who could never possibly do such a thing, and his only hope is to keep on drinking that Kool-Aid until the pitcher is empty. I’m not suggesting you feel sorry for him, but the dude is a mess.

I’m not sure that a violent offense committed a long time ago should forever bar a qualified person from holding high public office. This is America, land of second chances, and all that. But that’s not really the issue, is it? I think the key word in that first sentence is "qualified."

Brett Kavanaugh is a pathological combination of male privilege, class privilege and racial privilege, poured into the most constricted and impoverished version of masculinity imaginable and indoctrinated with right-wing legal dogma. Guys, if you look at him with that sense of shame and recognition I was talking about earlier, and feel regret for those occasions you didn't do anything or say anything, now is the time to stand up. Rape or no rape, no man carrying that kind of damage should be in charge of anything, ever.