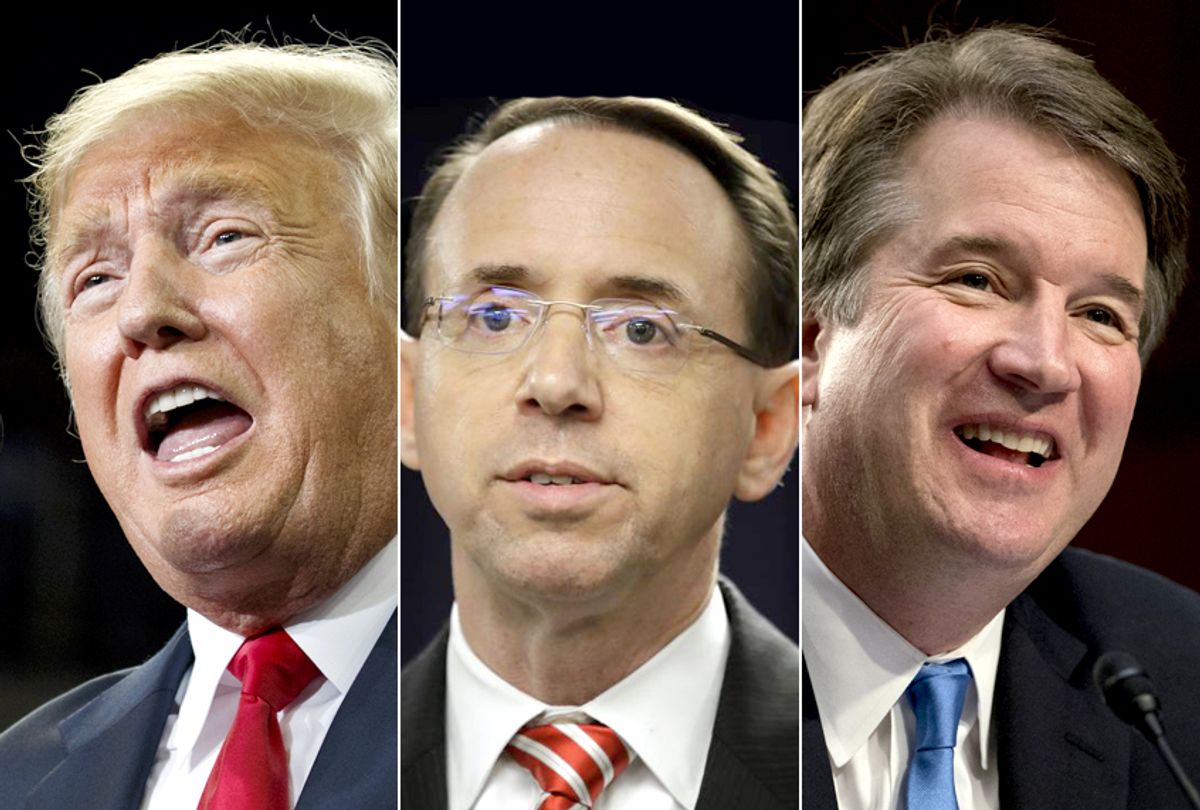 President Donald Trump played the media for fools on Monday, briefly distracting from the controversy surrounding his Supreme Court nominee Brett Kavanaugh by threatening to fire Deputy Attorney General Rod Rosenstein, who has been overseeing the Robert Mueller probe. As a report from Vanity Fair lays out, "For all the morning’s madness, there may have been an underlying logic":

Over the weekend, as Brett Kavanaugh’s prospects appeared increasingly imperiled, Trump faced two tactical options, both of them fraught. One was to cut Kavanaugh loose. But he was also looking for ways to dramatically shift the news cycle away from his embattled Supreme Court nominee. According to a source briefed on Trump’s thinking, Trump decided that firing Rosenstein would knock Kavanaugh out of the news, potentially saving his nomination and Republicans’ chances for keeping the Senate. “The strategy was to try and do something really big,” the source said. The leak about Rosenstein’s resignation could have been the result, and it certainly had the desired effect of driving Kavanaugh out of the news for a few hours.

This doesn't mean that Trump has any loyalty to Kavanaugh, however. Despite the president's own lengthy history of facing sexual misconduct accusations, he has reportedly decided that Kavanaugh is a liability whose inability to get confirmed could depress Republican voter turnout in the November midterm elections. His advisers see that possibility as having potentially fatal consequences for Trump's presidency.

On Monday morning, a Republican briefed on Trump’s thinking said the president has been considering pulling Kavanaugh’s nomination.

According to the source, Trump allies are imploring him to cut Kavanaugh loose for the sake of saving Republicans’ electoral chances in the midterms. The argument these advisers are making is that if Kavanaugh’s nomination fails, demoralized Republicans will stay home in November, and Democrats will take the House and the Senate and initiate impeachment proceedings. The end result: Trump will be removed from office.

Kavanaugh, for what it's worth, has told senators that he will not withdraw his nomination to America's highest court, according to Reuters. That may be connected to the recent announcement by Trump's press office that the president and Rosenstein have already talked about reports that the deputy attorney general discussed wearing a wire and invoking the 25th Amendment against the president (which Rosenstein has denied), but that no final decision on Rosenstein's fate will be made until Thursday.

If one thing is clear, it is that Democrats in Congress do not want Rosenstein to resign.

After a report in Axios claimed that Rosenstein had verbally offered his resignation to White House chief of staff John Kelly, Rep. Adam Schiff, D-Calif., wrote on Twitter that "under no circumstances should Rod Rosenstein resign. This would place the Mueller investigation in even greater jeopardy. Rosenstein should continue to do his job, protect the independence of the DOJ, and if the President intends to obstruct justice, force Trump to fire him."

In the event that Trump does fire Rosenstein, Democrats in the Senate and House have already agreed to act with Republicans to protect both special counsel Robert Mueller and the materials from his investigation, according to NBC News. While it is unclear whether they could propose legislation that would actually pass in Congress, the report indicated that there at least some congressional Republicans are sympathetic. Progressive activist groups are also prepared to launch rallies, and believe they can get hundreds of thousands of  protesters into the streets if Trump tries to squash the Russia probe.

Should Rosenstein be fired, the immediate question would be who would replace him. Rep. Ted Lieu, D-Calif., has already spoken out out against Rosenstein's presumed successor, Solicitor General Noel Francisco, writing on Twitter that "if Rosenstein departs, Noel Francisco should not oversee the Special Counsel investigation. His previous firm Jones Day represents the [Trump] campaign in the Special Counsel investigation. This is a huge conflict of interest."

"If the President really wants to get rid of the lingering stench at the Department of Justice, he must appoint former federal prosecutor Sidney Powell as Rod Rosenstein's successor," Michael Caputo, a major Republican political strategist and media consultant, told Salon by email.

He added, "A remarkable attorney and author of the landmark book 'Licensed to Lie: Exposing Corruption in the Department of Justice,' Ms. Powell is the right person to fumigate Main Justice and reform the department to once again serve the people of the United States."