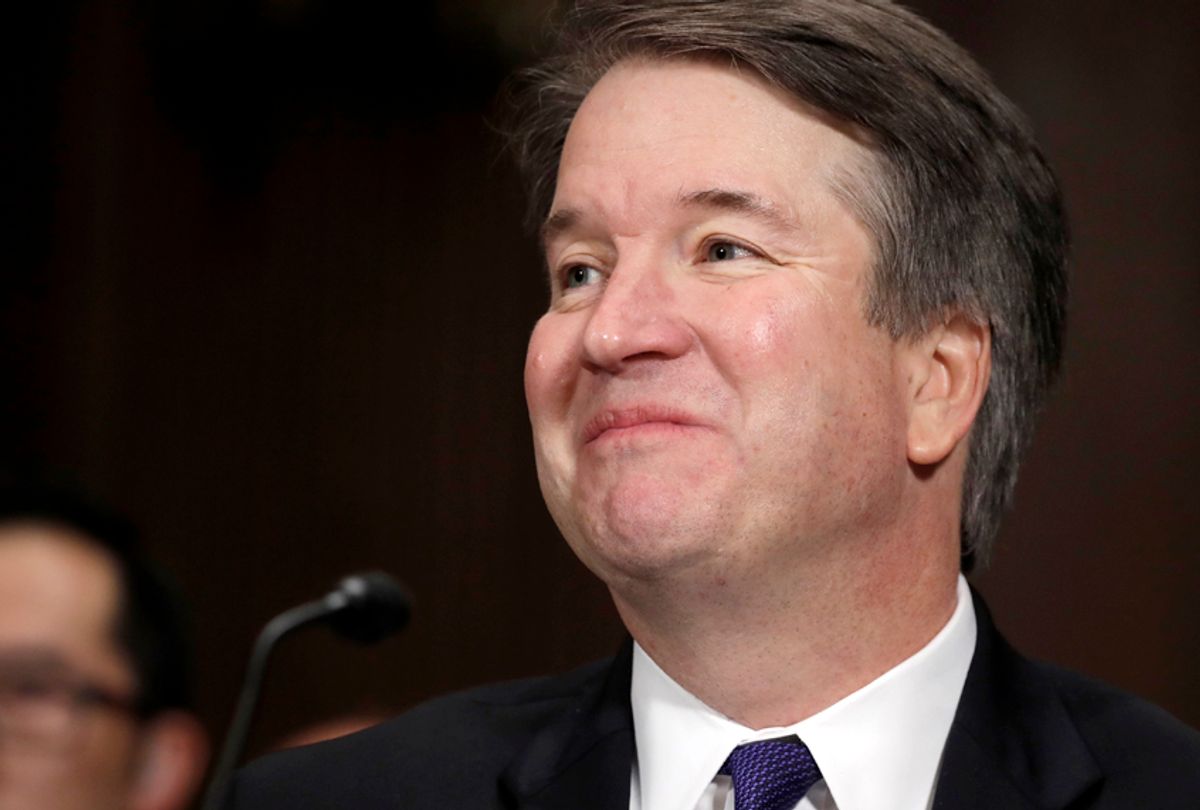 Supreme Court hopeful Brett Kavanaugh penned an op-ed in The Wall Street Journal on Thursday in a last-ditch effort to defend his fiery and defiant behavior during last week's hearing in front of the Senate Judiciary Committee  — and it seems to have worked.

Democratic Sen. Joe Manchin of West Virginia joined with Republican senators to vote in favor of advancing Kavanaugh's nomination to a final vote on Saturday. Republican Sen. Lisa Murkowski of Alaska was the lone Republican to vote "No" on Kavanaugh in Friday's 51-49 vote.

"I was very emotional last Thursday, more so than I have ever been," Kavanaugh wrote. "I might have been too emotional at times. I know that my tone was sharp, and I said a few things I should not have said. I hope everyone can understand that I was there as a son, husband and dad. I testified with five people foremost in my mind: my mom, my dad, my wife, and most of all my daughters."

Kavanaugh and university professor Dr. Christine Blasey Ford testified to the Senate Judiciary Committee last week after Ford accused the high court nominee of attempted rape in the 1980s. Earlier in the day, Ford testified to the Senate panel that she was "100 percent" certain that Kavanaugh had assaulted her. Ford alleges that a drunken Kavanaugh pinned her down at a party and attempted to remove her clothes, covering her mouth when she tried to scream — a moment she said made it so hard for her to breathe that she thought he might accidentally kill her.

In his defiant opening statement to the Senate Judiciary panel last week, Kavanaugh said he's the victim of "a calculated and orchestrated political hit, fueled with apparent pent-up anger about President Trump and the 2016 election, fear that has been unfairly stoked about my judicial record, revenge on behalf of the Clintons, and millions of dollars in money from outside left-wing opposition groups."

In his op-ed on Thursday, Kavanaugh attempted to assure readers that his behavior at the hearing was not who he says he is — an independent and impartial judge — and conceded he became "too emotional." He also defended his behavior — which he blamed on the "deep distress at the unfairness of how this allegation has been handled" — by pointing out that his high school and college years were coming under intense scrutiny while his family faced "vile and violent threats."

But he wrote, without explicitly apologizing for his behavior, "The Supreme Court must never be viewed as a partisan institution. The justices do not sit on opposite sides of an aisle. They do not caucus in separate rooms." He also promised he would be "even-keeled" going forward, and said, if confirmed to the nation's highest court, he "would always strive to be a team player."

He, however, did not address any falsehoods he told while under oath. In recent days, some who knew Kavanaugh in high school and college have publicly accused the judge of lying under oath during last week's Senate hearing. On Thursday night, a group of former Yale University students who called themselves "drinking buddies" with Kavanaugh added their voices to the chorus of Kavanaugh's former classmates who have urged the Senate to vote against his confirmation.

The former classmates of Kavanaugh's — Charles Ludington, Lynne Brookes and Elizabeth Swisher — wrote in an op-ed for The Washington Post that they spoke out publicly against Kavanaugh because they felt he made dishonest statements during a television interview with Fox News and during his Sept. 27 testimony to the Senate Judiciary Committee.

"We each asserted that Brett lied to the Senate by stating, under oath, that he never drank to the point of forgetting what he was doing," they wrote. "We said, unequivocally, that each of us, on numerous occasions, had seen Brett stumbling drunk to the point that it would be impossible for him to state with any degree of certainty that he remembered everything that he did when drunk."

The three added that they "disrupted" their own lives by speaking out about Kavanaugh's alleged drinking.

"None of this is what we wanted, but we felt it our civic duty to speak the truth and say that Brett lied under oath while seeking to become a Supreme Court justice," they wrote, adding that they believe telling the truth is a "moral obligation for our nation's leaders."

"No one should be able to lie their way onto the Supreme Court," they wrote, before asserting that they believe "that Brett neither tells" the truth or is an embodiment of courage.

"For this reason, we believe that Brett Kavanaugh should not sit on the nation’s highest court," they concluded.

In an unprecedented move, The Washington Post on Thursday also urged Senators to strike down Kavanaugh's nomination — a move the paper hasn't made since 1987.

"We believe presidents are entitled to significant deference if they nominate well-qualified people within the broad mainstream of judicial thought," the board wrote. "When President Trump named Mr. Kavanaugh, he seemed to be such a person: an accomplished judge whom any conservative president might have picked. But given Republicans’ refusal to properly vet Mr. Kavanaugh, and given what we have learned about him during the process, we now believe it would be a serious blow to the court and the nation if he were confirmed."

The Post said the Senate Judiciary Committee has failed to comprehensively review Kavanaugh's record. One of the principal omissions, the paper said, was the evaluation of Kavanaugh's time working in the George W. Bush White House.

"Those documents, which could have been processed without crippling delay, might end up supporting his case, or they might not; we have no idea," according to the editorial. "But any responsible senator should insist on seeing them before casting a vote."

The paper also slammed the FBI investigation into allegations of sexual misconduct raised against Kavanaugh as a haste and incomplete job, and pointed fingers at President Donald Trump and Senate Republicans for preventing federal investigators from conducting a thorough probe in an effort to rush to a vote.

The Post also expressed concern over Kavanaugh's fiery temperament during his testimony last week, nothing the nominee's "hyperpartisan rhetoric against 'the left'" — especially when he blamed the Clintons for leveling sexual misconduct allegations against him — is evidence that he's incapable of being impartial.

The board concluded, "The country deserves better."