Dikkers' new satirical book, “Welcome To The Future, Which is Mine”, pops a hole in Musk's technocratic worldview 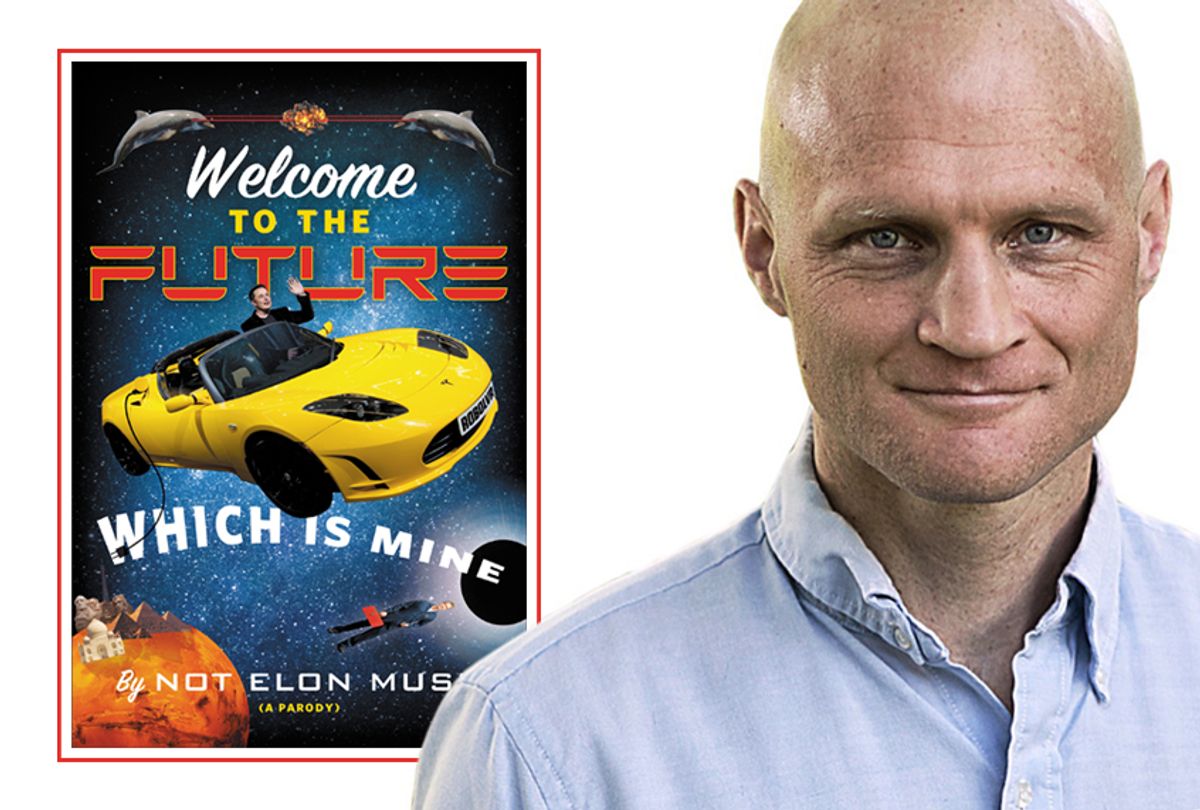 Like the other Silicon Valley robber-barons of our time, hundreds of years from now Elon Musk will be remembered as an eccentric neoliberal entrepreneur who presided over the halcyon days of Silicon Valley at its most imperious — a marketing genius who marketed himself as an actual genius who alone is capable of "disrupting" the auto industry, rocketry, or whatever else is on his mind in a given week. Love him or hate him, his polarizing and peculiar behavior make him an easy target for jokes.

It's easy enough to laugh at Musk’s eccentricities, yet there's a dark side to knowing how his elitist, technocratic vision of the future may impact future generations. This omen was, in part, the inspiration for The Onion’s cofounder Scott Dikkers’ new satirical book “Welcome To The Future Which is Mine” — written by Not Elon Musk (i.e. Dikkers). In the book, Musk is portrayed as a deluded, self-centered villain full of half-baked ideas. Sound familiar?

In our interview, Dikkers talked about what makes Silicon Valley good material for comedy, Silicon Valley’s role in our society, and how to mimic Elon Musk. This interview has been condensed and edited for clarity.

Nicole Karlis: There are a lot of characters in Silicon Valley. How did you decide that Elon Musk was worthy of a whole book?

Scott Dikkers: Well, I do think that he is the most known. He is the most flamboyant and the most celebrity-ish — with the possible exception of Mark Zuckerberg, but frankly Mark Zuckerberg is boring. Yes, he seems ripe for the picking. I mean, no other real deep exploration went into this than that.

What is it about the tech industry that makes for great satire?

I grew up imagining that the [21st century] would be this futuristic time when we’d have flying cars and robots, and Elon Musk has all those things. He makes them. I can’t be the only one who is fascinated by that idea. As the world burns and crumbles around us, there are these people who are just doggedly pursuing the idea of a utopian future where we all ride around on conveyor sidewalks and have robot servants do everything for us. I mean we’re so close.

There’s just a lot of weird political things that are in our way. Like, nobody predicted there’d be such wealth disparity. All the jobs are automated so there’s all these cool robots, but that means actual people don’t have jobs and don’t get paid. We imagine that we’d be sitting in luxury in our one-piece space suits while the robots did all the work, and so I guess these people are living out that dream, sort of. That’s just fascinating. Who could have foreseen the internet? That was the thing that nobody could have foreseen.

It’s just a really fascinating time, and Silicon Valley is kind of a nexus of that particular type of fascination, at least for me. That these people could become famous media celebrities through social media and stuff. The robber-baron used to be mythic figures, and you’d see them in editorial cartoons, in a Hearst newspaper, and that’s about it.

Elon is portrayed as a scatter-brained villain. What do you think it says about us that we elevate these people in our society?

Yes, so that is a very curious thing to me that’s happening, because I don’t think we elevate them. I think, to a certain extent, our corporate masters have always been somewhat elevated. Going back to people like Bill Gates or Henry Ford, like, people admired their success and their riches, I guess, and so there’s always that element, but now there’s this added element of them being celebrities as well.

They’re social media celebrities and YouTube celebrities — or just through publicity, they’re in our lives and they’re famous. We elevate them to a certain extent as we always have. But now they can push themselves on us more, and I think a lot of people are fans of Elon Musk — and I guess other people like that, because Elon Musk has like a publicity division that promotes his eccentricities and promotes him as a cool, fun figure. I’m guessing at that. I really don’t know that he has publicity people but if I had that many billions of dollars, I probably would have somebody like that. I’m just assuming.

What are the implications of someone like him trying to take over our world? Are you nervous?

No. I think historically we live in a pretty good time, not as great as... I don’t know, maybe 40 years ago, in terms of one area. But we live in a really great time in terms of a lot of others, like social progress. Now is likely the best time and the best country to live in probably ever. But in terms of like somebody, like monopolies and billionaires taking over our lives, it’s not good but still better than most of human history.

I think the inexorable tide of history is more wealth and more power being concentrated into smaller and smaller hands. The vast unwashed are becoming more and more desperate and poor and exploited. That tide is definitely swung in the wrong direction in recent years so that concerns me, but I still do feel like we live in a pretty sweet time where there is at least some nominal opportunity for people to be self-starters and to work hard and make their own way of life without just being peasant farmers who are born into servitude for their whole lives... but it’s getting close.

If you spend as much time in rural America as I do, you see just crushing poverty and these people just have no way out. All they have in their town is the superstore Walmart and it’s like the company store in the coal mining days. There’s no way out for them. As you probably know, 63% of American households can’t withstand a $500 emergency. So many people have talked about how Jeff Bezos particularly could cure world hunger and really not even feel a dent in his wallet. But, it’s not his responsibility and [he's] not probably going to... and Elon Musk, the same thing, he’s got billions of dollars, what good is that to anybody? Why do we elevate him? I don’t really understand it, but it is nonetheless fascinating to me.

Escapism is a prominent theme in the book. Elon’s solution for almost everything is to leave Earth, and go to Mars. Do you think that’s a common theme in Silicon Valley?

Yes, definitely. I think much like there’s a Washington, DC bubble that people live in, there’s a Silicon Valley bubble where people — typically white men — live in this bubble of privilege where they have unlimited wealth and unlimited possibilities to build utopias out of technology. They don’t really understand the reality of the world, and so I think those people are excited to escape into this utopia because they’re already sort of halfway there already..

Why wouldn’t the rest of us want to escape into that same utopia? I guess that’s another reason probably why we like those people. It’s just like how in the 1930s, during the Depression, people escaped [by going] to the movie theater. It’s like, their only escape from the drudgery of day-to-day life ... [Now] the internet is the center of our means of escape. These people are internet celebrities.

Your book really taps into the stereotype of the tech founder, someone who has dreams that are larger than life. In your opinion, where is the line between being too idealistic and just completely being out of touch with reality?

That’s a tough question for me, because I feel like I personally don’t know where that line is, so I don’t know if those people do either. I was born poor in a poor family, basically just a long line of farmers and preachers led to me... [I] had big dreams of succeeding in comedy and becoming successful at that. That was really unrealistic and really idealistic. First of all, I wasn’t funny at all and had no means to achieve any of that, but I guess, I’m a believer in working hard and working smart and pursuing your dreams, that whole “shoot for the moon and even if you miss, you’re still among the stars” theory. That really has guided me much of my life.

I think somebody said to me when I was in high school — like, a friend’s parent said to me, because I was making movies and doing all this comedy stuff, and then he was like, “Wow, you’re really going to go places with that.” It’s funny because we actually carried that quote through into the book. There’s a quote from “Elon Musk” where he says, "shoot for the moon and you’re a loser."

Have you ever met Elon?

I have not met him. I do not hobnob with such people. That is simply not my life. I actually don’t very often leave my apartment. When I travel, I rarely leave my Airbnb.

If you could meet him, what would you say?

If I met him, I would ask him one really simple question, and that is, "what’s your new comedy project?"  Because he’s been poaching writers from The Onion and he’s developing some new comedy project and I really want to know what it is.