Smart Watch: "House of Cards" moves on without Kevin Spacey

Also coming up this week: The debut of "Patriot Act with Hasan Minhaj" and "The Lost Tapes: Clinton Impeachment" 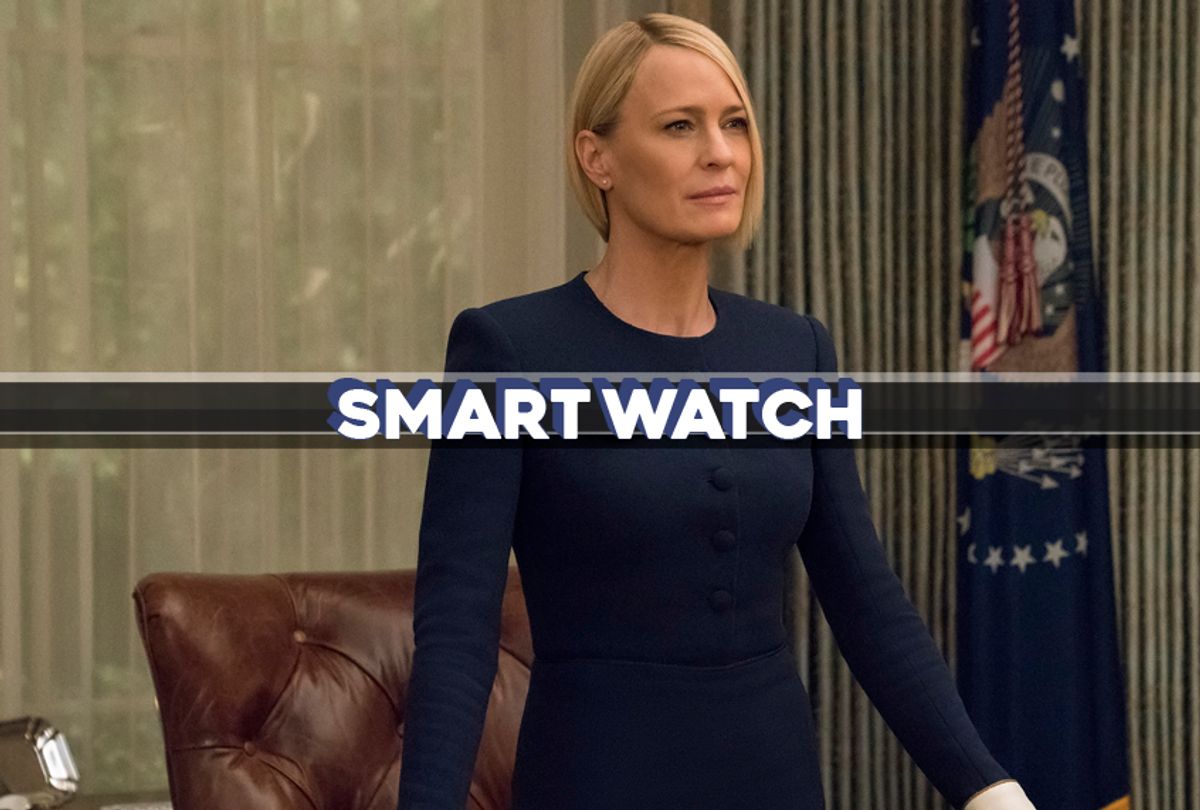 There's a scene at the end of the fifth episode of the upcoming season 6 of "House of Cards" that underscores dramatically how the show has shifted to be Claire Underwood's story, now that her husband and former President Francis has been killed off — suspiciously, maybe a little too conveniently — between seasons. The meta commentary on how "House of Cards" fired its toxic star Kevin Spacey after multiple sexual misconduct allegations — who, for all his star power, has always been the brazenly weak link in this ensemble, with Underwood's bootleg Foghorn Leghorn accent and shameless mugging — is almost too overt to stomach, but a truth the series has carried for five previous seasons and isn't dropping any time soon is that in the Underwood orbit, the dead always find a way to linger, one way or another.

But what the end of episode 5 hammers home, if viewers weren't quite getting it yet, is that this isn't just Claire Underwood's White House now: the most interesting storylines and conflicts in "House of Cards" now revolve around powerful women and their machinations and schemes and power plays, not those of men. Not just one woman, either, though Robin Wright turns in as layered and rich a performance as ever; and not just the frenemy stand-offs between Claire and her old school chum Annette Shepherd (Diane Lane), who along with her brother Bill (Greg Kinnear) play Koch Brothers-esque corporate power players wielding malevolent influence behind the scenes. This is a new version of "House of Cards," the show is saying, one in which even male characters as magnificent as Doug Stamper (Michael Kelly, delightfully intense as always) are going to play second string to the women who are changing the course of the country and the world, one chess move at a time.

The new season sets up an internal question for Claire that also has meta resonance beyond the pages of the script: Will she wield her power darkly like Francis, or forge a new way? In the beginning of the first episode, after listening to a litany of threats that have been issued against her ("I'd like to fry her eyeballs. If nobody else steps up to kill the president, I will. I'd enjoy it.") she locates what at first sounds like a Hill House haunting from within the building. A bird has somehow become trapped inside the wall, and as she walks it out onto the front steps, she pauses for an Underwood Fourth Wall Break: "It's not true what he told you all those years ago, that there are two kinds: useful and useless. There's only one kind. Pain is pain." The small, fragile bird in her hand. The camera lingering on her fist. Echoes of the first episode of season 1, when Francis lets the viewer know exactly who he is by strangling a dog. Who does Claire want us to think she is in that moment, and can we trust it to be true? Following Robin Wright through this season as she reveals Claire slowly and deliberately is worth a binge.

Hasan Minhaj hosted the first White House Correspondents Dinner of the Donald Trump administration, and he held nothing back in his excoriation of the "liar-in-chief," as he called Trump, and his administration: "Jeff Sessions couldn’t be here tonight. He was busy doing a pre-Civil War reenactment. On his R.S.V.P. he just wrote, 'no.' Just no! Which happens to be his second favorite n-word."

That night, Minhaj also gave a preview of his future trajectory: "For those of you who don’t know me, I am a correspondent on 'The Daily Show' on Comedy Central. Now, I see some of you whispering to each other—'What is Comedy Central?' Um, it’s basically an internship for Netflix."

It's a tongue-in-cheek prophecy that came true, first with Minhaj's Netflix comedy special that debuted last year, "Hasan Minhaj: Homecoming King," for which he won a Peabody Award, and now with "Patriot Act with Hasan Minhaj," his new comedy show premiering Sunday night with its first two episodes. With "Patriot Act," Minhaj will make history as the first Indian-American host of a weekly comedy series.

Netflix says "Patriot Act" will "explore the modern cultural and political landscape with depth and sincerity," which sounds likable enough, if not terribly specific. But with a commitment of 32 episodes, Netflix appears to be promising it will stick by the show as it finds its feet, which has to be a relief for Minhaj. After all, his fellow "Daily Show" alum Michelle Wolf, whose own Netflix show "The Break," which premiered in the wake of her bombshell performance hosting the WHCD earlier this year, was allowed all of ten episodes before being canceled.

If it feels like it's been way too long since you've listened to the conversations Linda Tripp taped between her and Monica Lewinsky during Ken Starr's investigation into President Bill Clinton's affairs, I guess it's your lucky week? The Smithsonian Channel's "The Lost Tapes" series turns its focus to the run-up to and fall-out from Clinton's impeachment Monday evening, and if you've forgotten since he left office just how heckle-able Newt Gingrich is, seeing and hearing this much of him at the height of his power as Speaker of the House after the Republican wave in 1994 might rekindle that passion in you.

For those of us who were old enough to actually want to watch the news during this period, this episode of "The Lost Tapes" plays like an unsettling school reunion of sorts. Hey, there's Jake Tapper with a very '90s haircut before he was famous talking about what a nice girl Monica Lewinsky was! Oh yeah, there's Paula Jones being sneered at, and Hillary Clinton too. And it's almost quaint now, in the era of "grab 'em by the p**sy" and Stormy Daniels' Mario Kart analogy, to see the waves of politicians resigning in hypocritical disgrace after their own affairs came to light.

But this "Lost Tapes" installment is also a handy overview, told in real time through TV news clips and evidence recordings, of what was without a doubt a significant period in American history, as well as something of a master class in how one investigation — Starr's began with the Whitewater controversy, not sexual harassment or sexual affairs — grows beyond its initial scope. Mueller fans, take note: This kind of work can go on for years, which we might not even fully appreciate until Smithsonian does its own deep dive on the Trump administration in years to come.