With Michelle Wolf's and Robin Thede's shows canceled, we're down to Sam Bee and Sarah Silverman. That's not enough 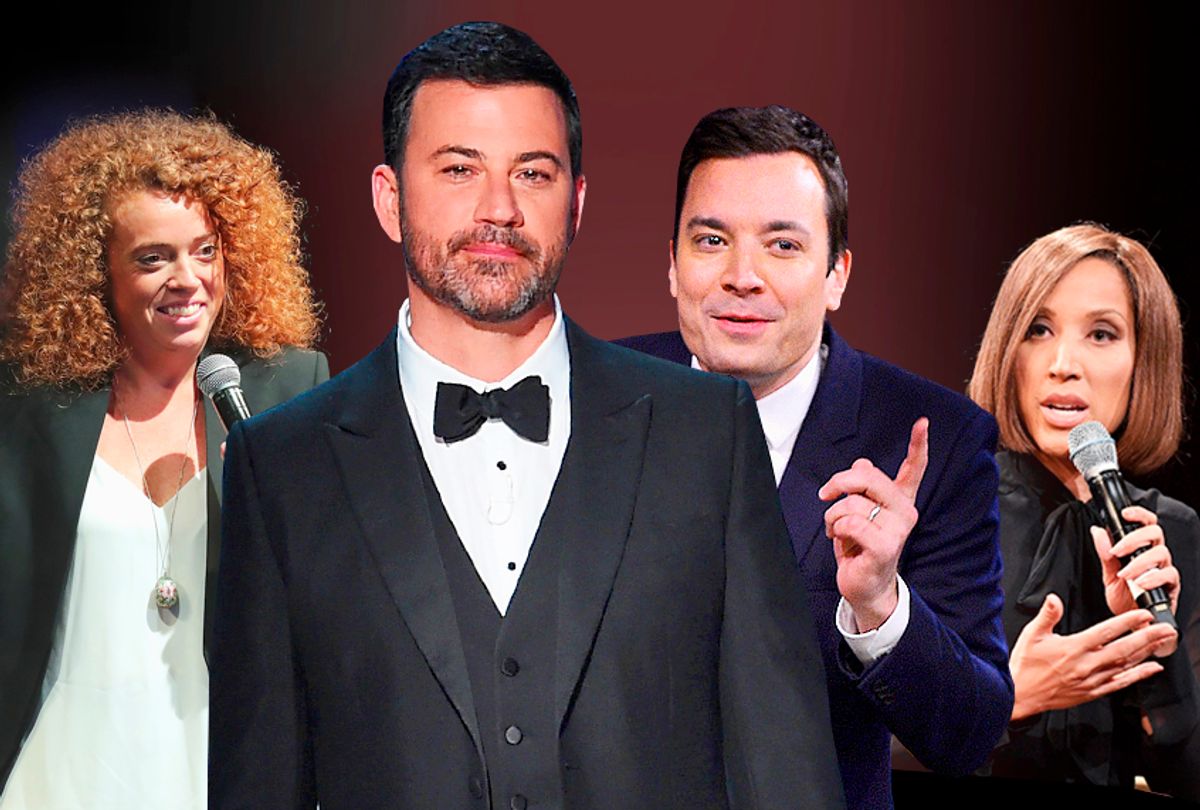 Last fall, to mark the premieres of Hulu's "I Love You, America with Sarah Silverman" and "The Rundown with Robin Thede" on BET,  Samantha Bee sent her sister-hosts lavender letterman jackets embroidered with satin hearts with "NASTY" written across them.

"Welcome to the late-night (adjacent) girl gang – I had a satin jacket made for you so it's official!" her note to Silverman reads. "Go get 'em Tigress XO Sam Bee."

Bee, the host of "Full Frontal with Samantha Bee" extended this hand in solidarity for good reason.  The sisterhood of the late-night (adjacent) jacket was already small in October 2017. Aside from Bee, Thede, and Silverman, Netflix had Chelsea Handler's weekly series, "Chelsea." And in May 2018, it added "The Break with Michelle Wolf" to its streaming line-up.

Today that small circle of women is back down to two: Handler vacated "Chelsea" in December 2017. Add in the recent cancellations of "The Break" and "The Rundown," and Bee and Silverman are, for the time being, the last women standing.

While Handler styled her exit from "Chelsea" as a choice, the sudden ending of Thede's program, followed by Wolf's, caught viewers off-guard. "The Break" debuted on Netflix to a great deal of fanfare, heated by its host's controversial and dead-to-rights comedic takedown of the administration at the 2018 White House Correspondents' Dinner.

Thede came to her hosting gig by way of "The Nightly Show with Larry Wilmore," where she made history as the first black female head writer in late-night television. Her show enjoyed near-universal acclaim. BET, which recently underwent an executive-level shake-up, requires a different metric to survive, alas. In announcing the show's cancellation on Twitter, Thede, explained, "Classic 'High critical praise/low ratings.'"

This is such a shame, for a lot of reasons. Each series was still in the process of finding its voice and rhythm when their respective networks cancelled them.

Stepping into the late-night fray, one of the most personality-driven formats in television, is not for the weak willed.

For one thing, it's a marriage of two arenas long dominated by men: stand-up comedy and the talk show format. Dating all the way back to Steve Allen on "The Tonight Show," the late night variety show has been associated with quick-witted avuncular males. Vanity Fair continued to perpetuate this rep with its 2016 cover story boasting about having interviewed "all the titans of late night," including a cover portrait from which Bee is noticeably absent.

Any women who enters this game is implicitly obligated come out swinging and make noise — but only the right kind of noise, like refraining from referring to Ivanka Trump with the c-word — and keep on delivering hits.

Bee has pulled this off since day one, unsurprisingly. When she left "The Daily Show with Jon Stewart" to launch her TBS program, she had served as Comedy Central's longest-running fake-news correspondent. "Daily Show" fans already knew her so, in effect, "Full Frontal" is a continuation of work she already was doing.

Viewers were only starting to become familiar with Wolf, whose star was only beginning to ascend when she scored her Netflix series.

"The Break," which lasted all of 10 episodes, was still kind of a loose meat sandwich, a combination of skits and weekly stand-up bits distilling world events. Wolf pitched her show as a "break" from the anxiety of the news cycle.

Whether it achieved that is debatable, given that some of the biggest headlines generated by the show involved such punchlines as asking Ivanka Trump if her nickname was herpes. But she adopted a distinctly feminist perspective in her comedy that's valuable and still underrepresented, which worked best in the show's fake commercials, many parodying gender stereotypes and modern nuisances.

"The Rundown" had almost completely gelled by the end of its 24-episode first (and as it turns out, only) season. And its final episode, which aired on April 19, provided a brilliant set-up for a second season that one would think that BET would have considered to be indispensable, as Thede unveiled a recurring segment titled "Seat Snatch 2018."

A feature that could have been styled after "The Colbert Report"'s "Better Know a District" or "The Unblackening," an informative gag from "The Nightly Show," Thede explained that "Seat Snatch" was inspired by the 590 black women running for office this year.

"Guys, there haven't been this many black women running since Lil' Man brought out a super-soaker at the family reunion!" she jokes.

And this gets at the main reason that voices such as Thede's and Wolf's are needed along with Bee's and Silverman's: there are too many issues to dissect and too few analytical voices fulfilling that need.

Here's where I mention the standard disclaimer that people shouldn't be getting their current events analysis from comedians, yadda yadda yadda. The fact remains that the news cycle has always shaped late-night (and late-night adjacent) monologues.

But with regard to the way Bee and John Oliver use their platforms, the work they do is often as stringently researched and multiple-sourced as trustworthy television news features.

Bee's 2016 examination of a nationwide backlog of thousands upon thousands of untested rape kits — specifically focusing on Georgia, where a female legislator killed a bill that would have required the state to start testing them — received a 2017 follow-up that let its audience know that the bill had finally passed, and with bipartisan support.

And she's kept coming back to the issues impacting women the most, looking at the ramifications of rolling back reproductive rights on a state level and the impact of separating migrant children from their parents at the border, among other things.

Thede, meanwhile, consistently hammered away at all the various aspects of white supremacy rearing up within our culture, from white people calling the police on black folks for innocuous acts to voter suppression.

"You should want to know what a black woman feels," she told Entertainment Tonight not long after her show premiered. "You get a bunch of Jimmys' opinions every other night."

Another layer of tragedy in losing "The Rundown"? It could be that it failed to draw an audience for the exactly the reason that it's so badly needed. Silverman's "I Love America" floats on a quest to find common ground; the hardest that she ever hit was when she called out white nationalism.

Otherwise, employing her sly sweetness, her main tactic is going meta, leaning into her celebrity and reputation to bring attention to topics raging from the personal and innocuous to the unavoidably political.

Fewer folks know Thede by sight, and "The Rundown" wrestled with many of the same issues that "The Nightly Show" dove into: lawmakers' assault on civil rights, voter disenfranchisement, over-policing minority populations and that classically evergreen topic of institutional bigotry. But she also showcased emerging hip-hop artists and other black voices, as well as taking on lesser-known topics such as climate gentrification, or African Americans' unequal access to the cannabis boom.

And like "The Nightly Show," it was axed right when the world needed it most. (Comedy Central pulled the plug on Wilmore's and Thede's previous project just a few months before the 2016 presidential election which, as we know, had absolutely nothing to do with issues of race.)

One would think that BET would be the perfect home for a show like Thede and, particularly in the current climate, that it would have allowed "The Rundown" time and support to gain traction in the marketplace. Apparently the network (or more likely, its parent company Viacom, which changed CEOs in late 2016) has different ideas.

"Last Week Tonight" and "Full Frontal" being exceptions, there's slim to no chance that late night viewers will see the topics that filtered through "The Rundown" addressed on any other variety talk show program. And these are stories that should concern everyone, but they're specifically about marginalized voices, women and minorities (and, more to the point, minority women).

Only a week ago, Bee shared with this response to a question about being one of few women in late night with The Cut:

Everyone's working so hard in their own bubbles, so it's not like we all get together and have a dinner party to commiserate (though we totally should have a party at some point). But I'm just excited by new voices. I'm excited by Michelle Wolf; I'm sad that 'The Rundown' is done. I recall pitching a topical show years ago for myself, and the feedback that I got from that was, Why would we want another show like that? We already have Jon Stewart. It really felt to people that there was only one voice needed in that landscape. I hope that we have proven that to be false. You don't know what voice is needed until you hear it, so there's a lot of room to grow.

And TBS is reaping the rewards for letting Bee amplify these perspectives. Currently "Full Frontal" is nominated for a whopping seven Emmys: four for the series and three for its special "Full Frontal With Samantha Bee Presents: The Great American* Puerto Rico (*It's Complicated)." It's also one of series to score nods in the categories of writing, direction, and Outstanding Variety Talk Show. (The other two are shows fronted by Bee's "Daily Show" brethren, "Last Week Tonight with John Oliver" and "The Late Show with Stephen Colbert.")

In a turn of bittersweet coincidence, Wolf also happens to be a fellow Emmy contender in the Outstanding Writing for a Variety Special category for her HBO special "Michelle Wolf: Nice Lady."

Netflix, by the way, hasn't written off the talk show format. It's done quite well with David Letterman's "My Next Guest Needs No Introduction." Joining it on the service is "Patriot Act with Hasan Minhaj," a project helmed by yet another "Daily Show" former correspondent and the first Indian American to host a weekly comedy show. The first of its weekly episodes airs on October 28, entering the marketplace with a 32-episode order.

That's right: At the moment fried chicken pitchman and golf commentator Norm Macdonald has a show, and Michelle Wolf and Robin Thede do not.

Though this doesn't do much to ease the pain of their loss, Thede and Wolf join a list of former talk show variety hosts that includes Joan Rivers, Whoopi Goldberg, Wanda Sykes and Mo'Nique.  As is true of those women, it's unlikely we've heard the last of them. And hope remains: on Monday TNT announced it has ordered a pilot for "Naked With Niecy Nash," described as "a unique show with a late-night feel" featuring the star of "Claws" (and another former Comedy Central personality).

Thede, who hosted the Television Critics Association's annual awards ceremony earlier this month, indicated that she has a few projects in the works. But she's still wisecracking about the headlines. Tuesday, in reaction to Donald Trump's former attorney Michael Cohen striking plea deal in his financial fraud case, she joked, "I know why the caged bird sings."

This was followed by a reference to Madonna's disastrous appearance at the VMAs, where she made a tribute to the late Aretha Franklin all about herself. "Breaking: Madonna to enter a guilty plea on 8 counts, including impersonating a British person, cultural appropriation and poor icon tributes at award show."

Not long after tweeting that she mused…

What a day to not have a late night show!

Left unclear is whether this statement came from a place of wistfulness or relief.