Guest on Tucker Carlson's Fox News show: "The blackface tradition in America is dead as a doornail"

"I would like Lester Holt to do the news as Susan Boyle," Mark Steyn said. ". . .We should all get over this stuff" 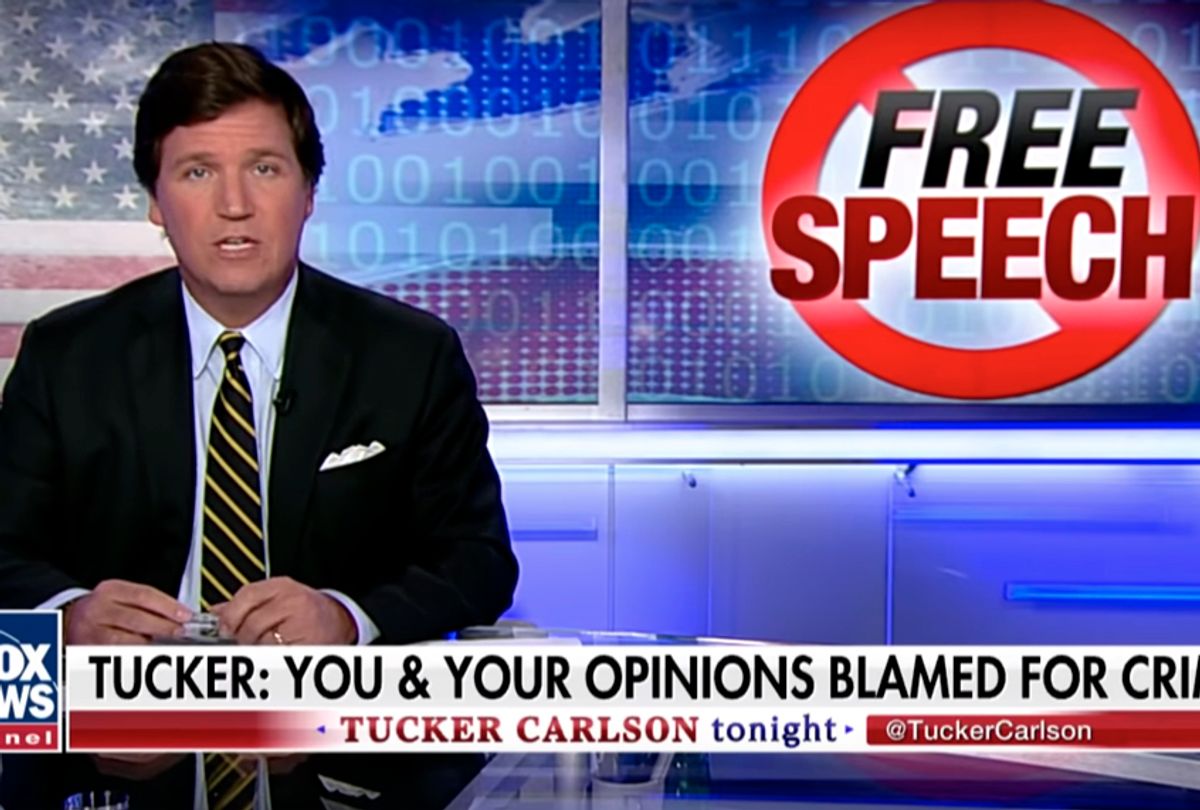 Tucker Carlson leaned in to one of his favorite topics on Fox News last night, discussing the perils of political correctness and the supposed double standard allegedly applied to the right. Joined by author and conservative activist Mark Steyn, the duo addressed Megyn Kelly questioning if applying blackface on Halloween was racist and the fallout that ensued leading up to the former Fox News star's unceremonious exit from the broadcast network two days later.

"Take a look very quickly at this horrifying image," Carlson said Monday on "Tucker Carlson Tonight" as he revealed an archival photo of NBC's Lester Holt dressed up as the British pop singer Susan Boyle on a Halloween episode of "Today."

Holt reported on Kelly's offensive statements on "NBC Nightly News" after she defended blackface on the her axed self-titled third hour of "Today," noting that it was not "the first time Kelly has come under fire for comments about race."

"He has changed his appearance in a way that is now very controversial," Carlson said of Holt. "He wore that costume for a Halloween episode of the 'Today Show.' Megyn Kelly, of course, was just fired for dress — for suggesting that it wasn't always bad to dress up as a member of an opposite race."

Tucker Carlson is doing a segment about "whiteface" pic.twitter.com/a2cZlccnzn

"I want to be clear," the Fox News host added, "I don't think there's an equivalence between the two. There's a long history of one and not of the other. But I also wonder — I don't think there are like five people in America who'd be deeply offended by what Lester Holt did. I'm not offended by it."

"Maybe, though, if you dress like that, you should be slightly less self-righteous in the face of other people's transgressions," Carlson added.

The next day, Kelly offered an apology, admitting that she had ignored the troubled history of blackface in America. She went on to undermine the sincerity of her apology by claiming, "I have never been a PC kind of person, but I do understand the value of being sensitive to our history, particularly on race and ethnicity."

Carlson's guest had even stronger comments regarding the Kelly controversy. "The fact is – again – it's not about anything real," Steyn said. "The minstrel tradition, the blackface tradition in America is dead as a doornail."

"Somewhere between 1942 and 1952, an entire tradition no longer became respectable. And, again, the cure is worse than the disease," Steyn continued. "I was down in Australia when I believe a Kanye West fan – she went to a party – he was her favorite celebrity, so she went to a party dressed as Kanye West. She's a nobody. She's 19, 22 years old. She's at the start of her life, and the entire Australian media wanted to destroy her. This is actually evil."

"I would like Lester Holt to do the news as Susan Boyle for a week," he concluded. "We should all get over this stuff."

"I know," Carlson agreed. "Let people apologize. If there's no forgiveness, then you can't have a functioning society."