Also on Sunday night: "The Deuce" season finale — and the premiere of "Red Hot" — and "Outlander" goes to the U.S. 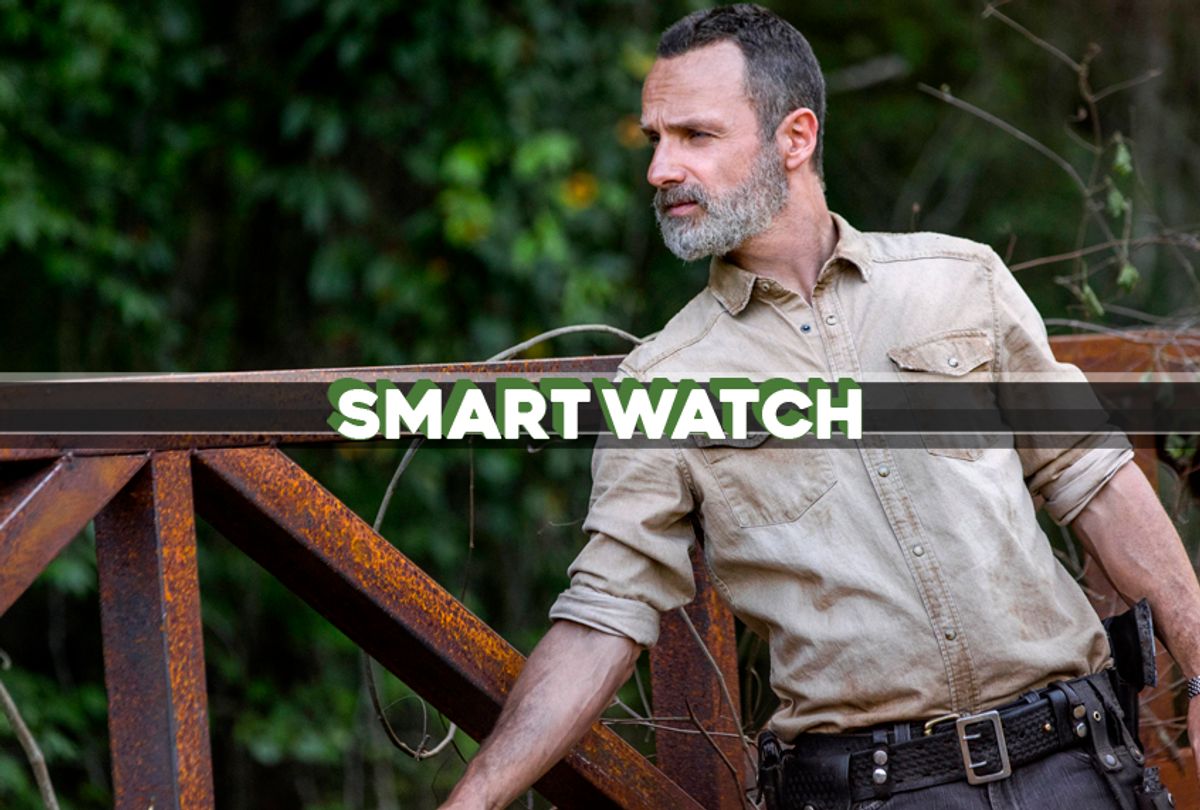 “What Comes After”: Rick Grimes’ last episode on “The Walking Dead” debuts Sunday, Nov. 4 on AMC

Slowly, surely, we are shaking off the Difficult Men television era, with the remnants of Walter White and Don Draper slipping further downstream as time wears on.

We will never be completely rid of their like, mind you. “Ray Donovan” is still standing, not to mention the top dogs of “Billions.” Don’t forget that long delayed set of “Deadwood” specials . . . those will be along presently. Oh, and as he reminded us following his arrest for punching a guy over a parking spot in New York this week, Alec Baldwin himself is still very much present in our lives.

Sunday at 9 p.m., though, we bid adieu to Andrew Lincoln’s performance of Rick Grimes on AMC’s “The Walking Dead.” Admittedly Rick Grime doesn’t qualify as one of those classic Difficult Men because he has behaved in very simple terms, as one would expect of a person set adrift in a zombie apocalypse.

Although Rick may not have been a full resident in the House of The Ones Who Knock, he is very much part of bloodline — a first cousin, at least. He’s been tried by very Difficult Men on his long road of survival, starting with his best friend Shane (Jon Bernthal, who went on to star in “The Punisher,” a Marvel superhero series about a difficult man) and The Governor (David Morrissey) along with relatively simple ones like Negan (Jeffrey Dean Morgan), a guy who enjoyed the basics, like absolute tyranny and murdering people with a baseball bat named Lucille.

Rick, too, has teetered into Difficult Man territory when he decided that the only way to keep his group alive was to be a dictator as opposed to a partner in leadership. He came back. His son Carl (Chandler Riggs) died. He mourned. He came back.

But in the same way we might recognize that the world may have spent too much time smitten with the travails and trials of Rick’s forbears, let us recognize that maybe Rick is exiting at the right time both for the show and for “The Walking Dead” in general. The series has a live-die-repeat sameness to it these days — even now, as the story has found a place where slaughter seems to have taken a back seat to some kind of rebuilding.

That seems like a good opportunity to reset, but viewers haven’t taken that bait this season: AMC’s once-dominant zombie phenomenon has taken a nosedive in the ratings.  That could be why the pop culture reaction to Lincoln’s departure from the series seems relatively tame despite the mystery surrounding the nature of his hero’s departure.

Or maybe it has something to do with knowing the series favorite son Daryl (Norman Reedus) and the widely loved Michonne (Danai Gurira) aren’t going anywhere, although Maggie is headed out the door next.

Lauren Cohan is signed on as the lead in ABC’s midseason procedural “Whiskey Cavalier.” Lincoln, meanwhile, got tired of being apart from his family in the United Kingdom. And those sticking Georgia summers can’t have been much of a gas, either.

Besides, maybe in some ways Rick had to depart, whether by death or other means, for other characters to live. In a lot of ways Daryl represents a leathery version of next-gen TV studliness, a man who is resourceful and tough but plainly sensitive to the needs of the men and women around him. If the world of this show is to be saved, pairing him with Gurira’s pragmatic, caring samurai isn’t a terrible way to go.

“Inside the Pretend”: season finale of “The Deuce,” airs Sunday, Nov. 4 on HBO

One imagines that purists may take issue with my lumping Rick Grimes in under the Difficult Men heading, a title author Brett Martin used to refer to Tony Soprano and Omar Little from “The Wire” as well as the other characters I mentioned. But he also used it to describe the men who created those characters — one of whom, David Simon, co-created “The Deuce” and wrote this week’s finale, premiering at 9 p.m.

But the show’s second season is less concerned with spelunking the inner psyches of its male characters than showing the toll, setbacks and obstacles its women battle at every step — especially Maggie Gyllenhaal’s Candy, the prostitute-turned-porn director who manages to merge art with hardcore sex scenes and gets broad (relatively speaking) distribution for her movie, “Red Hot.”

Her achievement, however, remains interlinked with the men creatively assisting and encouraging her, like Harvey (David Krumholtz), as well as the one who just wants a cut of the action, Frankie (James Franco). And in this final episode, Candy’s taste of success is sweet and not without its bitterness.

Within its period-piece exploration of the sex-industry’s mainstreaming rests many stories of compromise. Candy’s tale gives “The Deuce” its soul, in that she doesn’t seek to do anything that the men around her are getting away with, and yet, when she isn’t being thwarted, she’s punished for being a woman in a man’s business, where the business is exploiting women.

“Inside the Pretend” caps a second season that topped its first for many reasons, one being that it has more sparkle without sacrificing its grit. Candy’s arc, and Gyllenhaal’s stunning portrayal, are the prime driver behind its success.

Ardent and loyal as this show’s fans are, “Outlander” has yet to earn the fervent respect other dramas have. That’s likely due to its unapologetic dedication to the pure true romance shared by Jamie (Sam Heughan) and Claire (Caitriona Balfe), the sort of heart-driven narrative that earns little love from critics, most of whom are still men.

A share of that dismissal may also be attributed to the fact that Jamie Fraser is the opposite of a Difficult Man. He’s devoted to his people, his honor, and his wife. Claire, a woman from the future, holds fast to her progressive views and refuses to downplay her talents and strengths.

In 18th century America, where the pair have landed, their devotion to what’s right gets them in trouble almost immediately.  This new season, debuting Sunday at 8 p.m., brings Jamie to his aunt’s estate. She’s a great and generous lady. She’s also a slave owner who doesn’t understand why she can’t own other people if she’s also nice to them.

“Outlander” hasn’t been squeamish in its devotion to depicting the ugly painful sides of life, and history, through its characters. Season 3 wrung out the bitter end of Claire’s marriage to her husband Frank, a casualty of her accidentally falling through time to land in 1743. Claire also weathered sexism to achieve her dream of becoming a doctor, and in doing so becomes best friends with Joe Abernathy (Wil Johnson), the only black man in the medical school class where she is the only woman.

Thus Claire's and Jamie's heroic responses to the horrors of slavery they witness aren’t coming from the ether or simply for the sake of allowing the white people to be on the right side in a gruesome historical chapter. Claire’s disdain has been established. As for Jamie, the man’s been raped, debased, imprisoned and enslaved.

If there were ever a white Scotsman who would come to America and not be down with owning others as property, it’s Jamie. Why? Because he’s not difficult. We’ll keep him around.