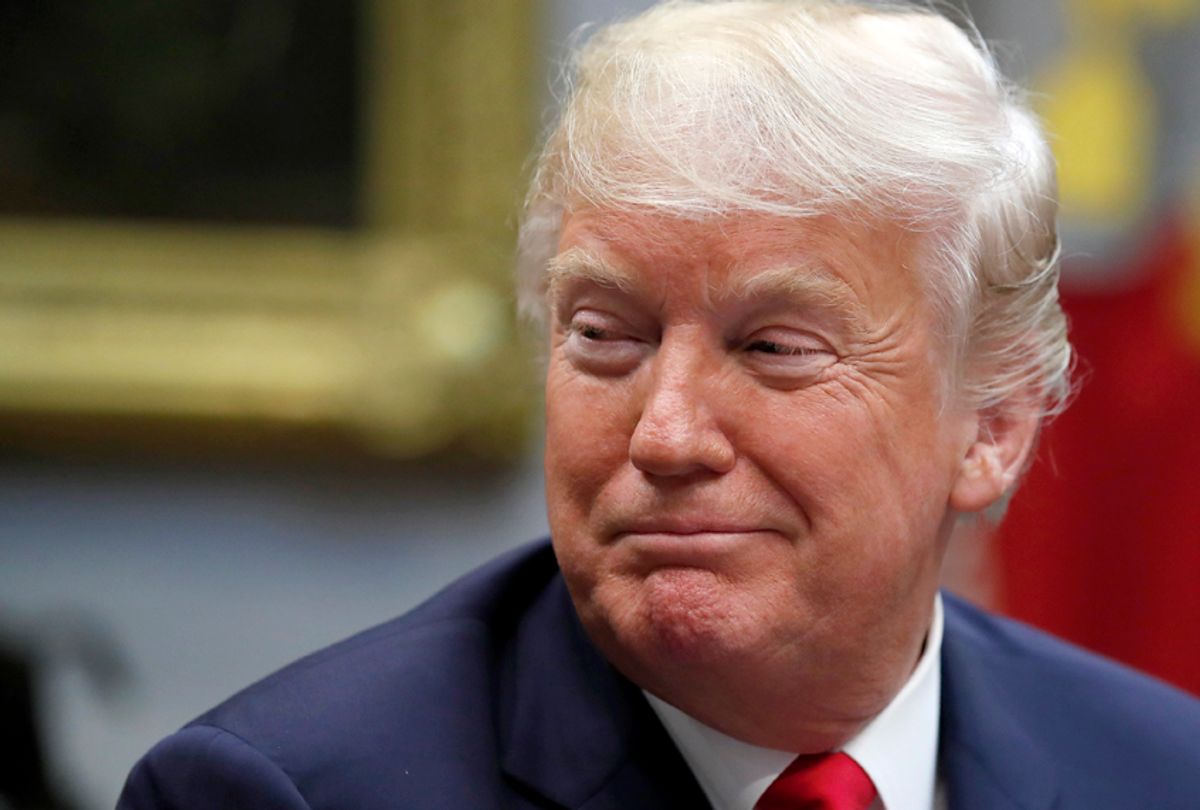 “At NBC, respect and dignity for all people are cornerstones of our values,” declares a statement NBC issued on June 29, 2015, in response to “derogatory statements by Donald Trump regarding immigrants.”

This was part of NBC’s announcement that it would cease airing the Miss USA and Miss Universe pageants which, until that moment, were part of a joint venture between NBC and Trump.

The network made this decision in reaction to Trump’s announcing his candidacy for president earlier that same month, and specifically this declaration: “When Mexico sends its people, they’re not sending their best . . . They’re bringing drugs. They’re bringing crime. They’re rapists. And some, I assume, are good people.”

This statement and many others that followed it offended NBC’s core values. In 2015.

Cut to November 4, 2018, when the network had no problem airing a flagrantly racist campaign ad during the third quarter of Sunday Night Football game pitting the New England Patriots against the Green Bay Packers, easily its highest-rated telecast of the week.

According to overnight ratings, some 21 million total viewers watched that game. That means a whole lot of potential voters saw the grinning mug of Luis Bracamontes — a Mexican man who entered the U.S. illegally and received a death sentence this year for killing two California police officers in 2014 — associated with the migrant caravan heading toward the U.S.-Mexico border.

Apparently this aligned with the Peacock’s core values, until today. “After further review we recognize the insensitive nature of the ad and have decided to cease airing it across our properties as soon as possible,” NBC said in a statement issued this morning.

The use of the term “insensitive” is an interesting one given the circumstances, not just with regard to the politicizing of race leading up to the midterms, but at NBC itself.

Broadcast television and social media are two of the most powerful forces in politics, with the former’s legacy media status lending it special weight during any election cycle. Stations in local markets have long allowed their candidates to get away with hyperbolic mudslinging in their advertisements. But national ads generally play to the middle with more centrist themes — health care, the economy, corruption, public safety.

Not this one. “Dangerous illegal criminals like cop killer Luis Bracamontes don’t care about our laws,” declares the ad paid for by Donald J. Trump for President and approved by the sitting president, adding, “Stop the caravan. Vote Republican.”

By the time NBC yanked the spot, it had already cycled through the broadcast network’s ad rotation as well as MSNBC’s. Viewers who didn’t catch it Sunday night might have seen it run during MSNBC’s “Morning Joe.”

Facebook and Fox News Channel also announced they had stopped running the ad. But all three did so after CNN declined the opportunity, calling out its racism in a Twitter response to Donald Trump, Jr.

CNN has made it abundantly clear in its editorial coverage that this ad is racist. When presented with an opportunity to be paid to take a version of this ad, we declined. Those are the facts. 🍎

Indeed, a sizable and vocal contingent on social media decried the bald-faced racism throughout a 53-second version of that advertisement pinned to the top of Trump’s feed on Thursday. NBC’s own news division ran an online story about it, albeit one that wanly describes its tenor as “racially charged.”

Other news outlets, including CBS, took the additional step of fact-checking the content of the online version’s assertions, specifically the video’s declarations that Democrats let Bracamontes into the country and "Democrats let him stay." Spoiler alert: This assertion is false. Shocking! “This is akin to blaming Republicans for criminals who entered the country illegally under Presidents Trump or George W. Bush,” says the CBS article.

NBC is far from alone in taking the bait laid out by Trump and the GOP that makes immigration, and specifically the manufactured threat of the migrant caravan moving northward from Central America, more viable as a wedge issue. This is the just latest example of the press, both print and TV, being placed into a situation it cannot win, in which the President trumpets a politically incendiary issue time and again that the press devotes tens of column inches or hours of coverage to debunking.

This is what journalists are supposed to do. However, chasing down boogeymen such as the caravan story also amplifies those narratives, drawing our attention away from issues of far greater concern. A migration of a group of people largely made up of women and children poses less of a threat to the American people than, say, cuts in social service programs providing a safety net to the economically vulnerable, or the emboldening of white supremacists and other domestic terrorists.

Regarding the ad in question, one would think that the home of “Will & Grace” and “This Is Us” would perhaps take into account the red flags being raised by its own news division as well as that of its competition, if not the outcry on social media likening the ad to legendarily racist Willie Horton campaign scaremongering from 30 years ago. Seems removing the false condemnation of Democrats was suitable enough for the ad department to accept what Trump campaign manager Brad Parscale described on his Twitter feed as a $1.5 million buy. (We reached out to NBC to ask how much it was paid for the ad and the network replied that it does not disclose that information.)

In 2015, NBC Universal cut ties with Trump and his pageants in a decision that cost them money, although one can safely wager it wasn’t much given the ratings of these contests. But taking a share of $1.5 million feels akin to selling out the electorate for 30 pieces of silver. Surely, like the guy that pile of change refers to, NBC has some deep regrets in this moment. As for tomorrow, and the days after that, who can say? If the three and a half years since NBC supposedly distanced itself from Trump give any indication, it’s probably unwise to guess they’ll learn from this mistake.

Here’s our own “further review” of some of the things NBC has let slide since it took that public stand on behalf of “respect and dignity for all people.” In November 2015, he hosted "Saturday Night Live." During that episode's cold open Larry David yelled out from the wings, as a joke, "Trump's a racist! . . .I heard if I yelled that they’d give me $5,000.” That was in reference to a reward promised by DeportRacism.com to any person who heckled Trump by stating what we now know to be obvious during that episode.

The network joined the rest of the media in doing its part to give Trump billions of dollars’ worth of free campaign advertising in the form of airtime.

Part of that included late night host Jimmy Fallon humanizing Trump by joking around with him as if he were a harmless Labrador, even in light of his comments about immigrants and minorities.

Its news division hired Megyn Kelly despite her, shall we say, “racially divisive” talking points and comments she peddled during her tenure at Fox News. The network is in the midst of negotiating her exit, outwardly portrayed as resulting from her comments legitimizing dressing as blackface on Halloween.

Then again, if Kelly’s transition to broadcast had been a ratings success, an apology may have been sufficient for NBC to keep her in the fold.

Former “Today” host Matt Lauer survived at NBC for years despite rumors of numerous acts of sexual misconduct, acts that former “Today” co-anchor Ann Curry says she reported to management in 2012, the same year she was fired from the show. It took several stories on his misconduct published in respected media outlets for Lauer to finally be jettisoned from the network.

After that got laughs, Davidson added, “I’m sorry, I know he lost his eye in war or whatever. Whatever.”

Crenshaw has since stated that Davidson does not owe him an apology. Castmate Kenan Thompson admitted Davidson missed the mark during an appearance on Monday’s “Today” show. Thompson really couldn’t do anything other than this; “SNL” producer Lorne Michaels is setting him up for what both star and boss hope to be a successful transition off of the late night sketch series.

At least somebody within the NBC corporation is sensitive to the implications of an ill-advised action.

Davidson’s off-the-cuff remark, however, doesn’t come close to running a racist, misleading ad before an audience of millions during a football game – a sport that the president has already politicized along racial lines. Davidson offended a group of people. The ad could impact how entire swaths of Americans vote, to say nothing of its potential to incite violence.

There’s no taking that back for NBC or any of the other outlets that ran it. At this point there can only be the notion that the network and others can correct the problem and commit to refraining from repeating it, thereby affirming those values of respect and dignity touted in 2015.

Something tells me we’ll be facing this problem again and again leading up to 2020, though. Because there are few things TV networks love more than a reboot.