Nancy Pelosi calls for bipartisanship: "We have a responsibility to seek common ground where we can"

Pelosi said she spoke with Trump on Election Day, and the two discussed working together on infrastructure spending 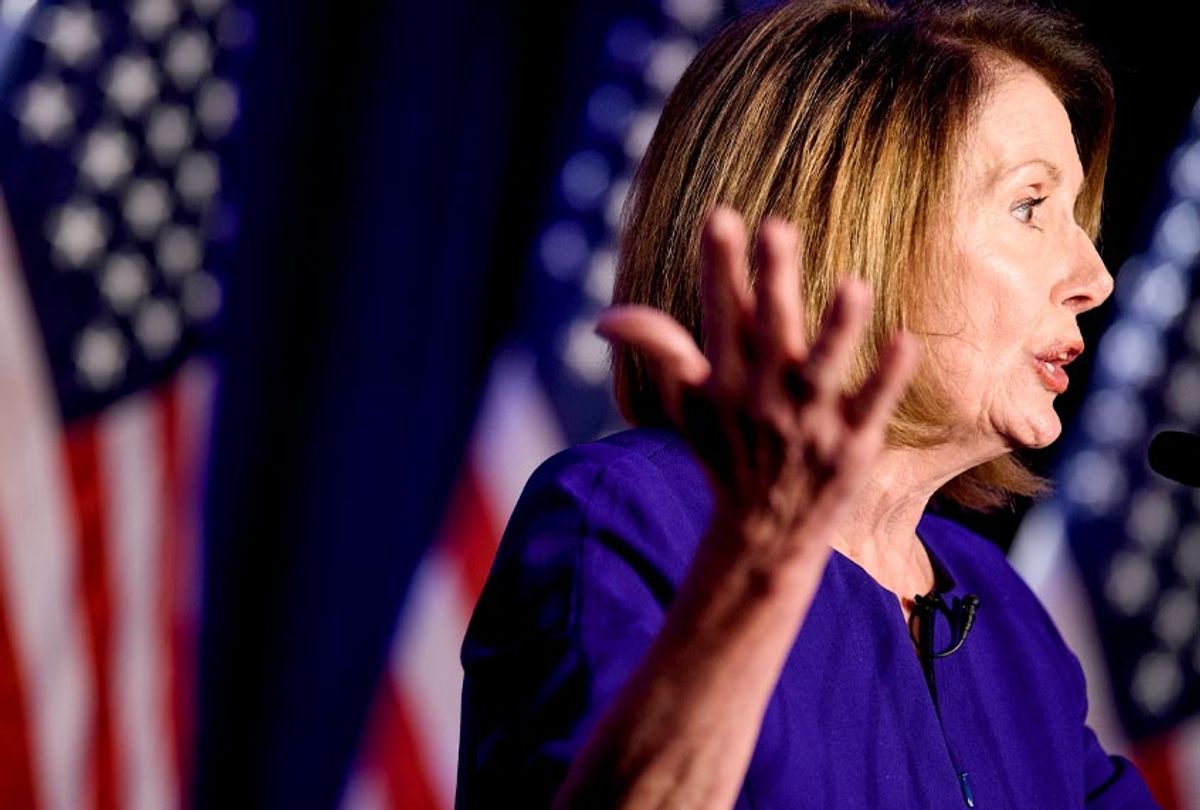 Democratic Leader Nancy Pelosi extended a pledge of bipartisanship to President Donald Trump and congressional Republicans just hours after she celebrated her party's takeover of the House of Representatives in Tuesday's closely-watched midterm elections.

The longtime California congresswoman, who made history in 2007 by becoming the first woman to wield the speaker's gavel, said that the new Democratic House majority would seek to reach across the aisle to Republicans.

"We believe that we have a responsibility to seek common ground where we can," Pelosi said Wednesday afternoon. "Openness and transparency, accountability [and] bipartisanship [are] a very important part of how we will go forward."

Pelosi drew on her experience of working with former President George W. Bush during her previous term as House speaker and concluded her prepared remarks by quoting former President Ronald Reagan, who were both Republicans. She also mentioned that she had spoken with Trump on Election Day, and that the pair had specifically discussed working together on infrastructure spending.

Just before midnight on Tuesday, Pelosi reportedly fielded a call of congratulations from Trump, current Speaker of the House Paul Ryan and Senate Majority Leader Mitch McConnell. Democrats won a clear House majority, picking up somewhere between 35 to 40 seats in all corners of the country — including in Kansas, Minnesota, New York and Pennsylvania. She is nearly certain to reassume the speakership next year.

Trump wrote Wednesday on Twitter that Pelosi "deserves to be chosen Speaker of the House by the Democrats. If they give her a hard time, perhaps we will add some Republican votes. She has earned this great honor!"

Tuesday's election outcomes mark a political comeback for the Democrats, who last held control of the People's House in 2010, and majorly restores the balance of power on Capitol Hill. Despite Pelosi's victories on Tuesday, she remains a deeply divisive figure in American politics. The California lawmaker has long been vilified by Republicans and has faced resistance from a fresh crop of Democrats, who have said on the record that they intend to oppose her in a call for new leadership. Pelosi, however, has said she is not worried about her chances to wield the speaker's gavel once again.

Pelosi's call for bipartisanship echoed comments she made Tuesday night after the Democrats seized control of the House of Representatives. At the time, however, Pelosi also spoke out about the importance of "restoring the Constitution's checks and balances to the Trump administration." She also said that the midterm elections were about "stopping the GOP and [Senate Majority Leader] Mitch McConnell's assault on Medicare, Medicaid, the Affordable Care Act and the healthcare of 130 million Americans living with pre-existing medical conditions."

"In stark contrast to the GOP Congress, a Democratic Congress will be led with transparency and openness, " Pelosi said Tuesday, "so that the public can see what's happening, and how it affects them and that they can weigh in with the members of Congress and with the president of the United States."

Earlier Tuesday, Pelosi warned against speculation that Democrats would move to impeach Trump now that they have taken back the House.

"It depends on what happens in the [special counsel Robert] Mueller investigation, but that is not unifying. And I get criticized in my own party for not being in support of it. But I'm not," Pelosi said. "If that happens, it would have to be bipartisan, and the evidence would have to be so conclusive."