Salon's reader comments of the week: "I'm not ashamed to be disturbed by bigotry"

Wildfires, the Clinton affair and more: Here's what our readers had to say 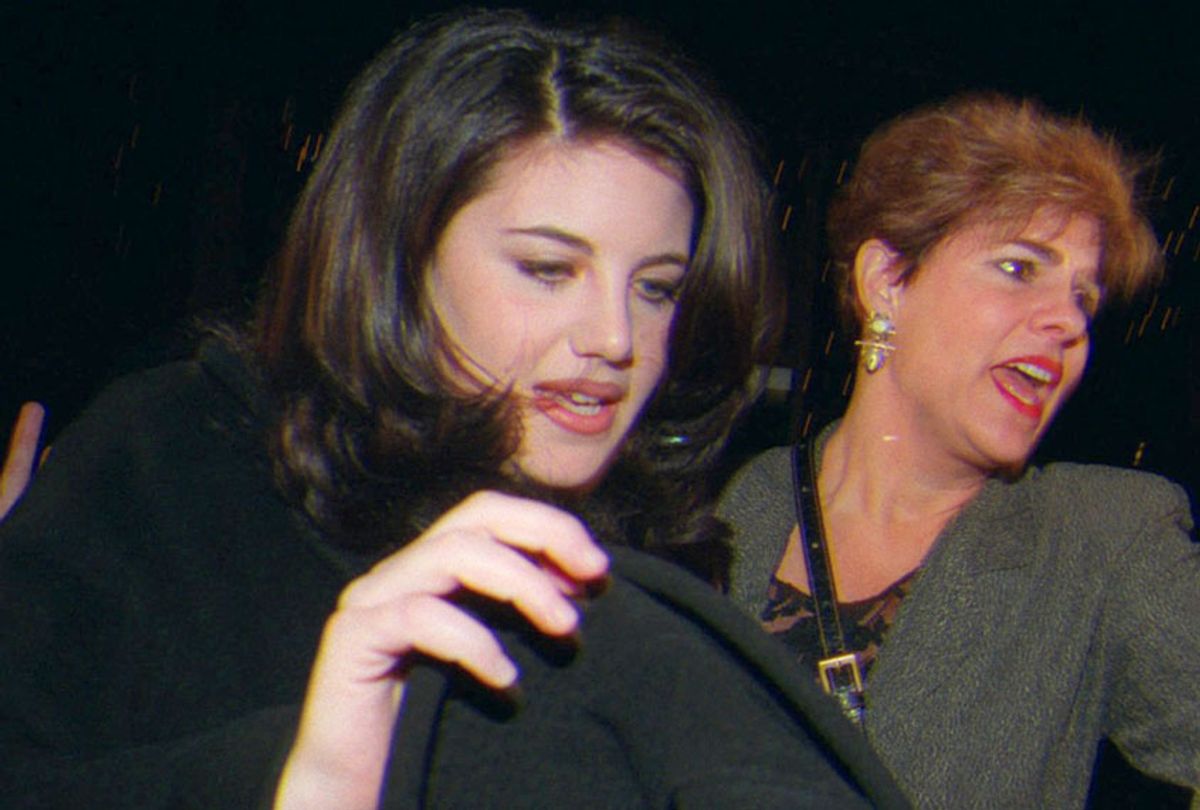 Monica Lewinsky and her stepmother, Barbara Lewinsky push through a large crowd of media as they leave a Santa Monica, Calif., restaurant Thursday Feb. 5, 1998 (AP/Nick Ut)
--

From what I've read, either one of the kids' fathers or the photographer urged the kids to make the Hitler salute and they instantly complied, as if they had been doing it since early childhood. The only kid who resisted later said he would have walked away, but the whole thing was over within about five seconds. This sort of conduct is consistent with a variety of studies on mass behavior, e.g. the Milgram Experiment, the Stanford Prison Experiment, Christopher Browning's book "Ordinary Men," and sundry analyses of the My Lai Massacre. In all of these cases, most people go along with what they're told to do, with various degrees of enthusiasm, whereas a few go at it with gusto, and a very few — in fact, it's frequently just one dude, like in the Baraboo case — refuse to participate. This appears to be a constant in human society, and it should scare the sith out of us — over and over and over again.

"The jagged hindsight of “The Clinton Affair”: 20 years later, it looks like a different story"

The entire affair was creepy. It was always creepy. And horribly cliché. I don't think Lewinsky ever deserved half (at least) of the scorn and abuse she took from the public. That was never fair. I remember watching her 2002 HBO special and sort of giving her a side-eye at the time. I mean, who flashes a thong at the president of the United States? I always thought that was brazen and incredibly reckless. But that never excused Bill Clinton's role in all this. He was the boss. He had 27 years on her and was sitting in the goddamn Oval Office! When you're the boss, you can't afford to be reckless.

Though I do not believe and never will believe Clinton's affair deserved impeachment, he still did something incredibly irresponsible. No, it's not on the same level as the shenanigans of other administrations, but it was still a bad thing.

How would this affair play in today's climate? Good question. Not great, obviously, but it's also not a #MeToo situation. After all, the affair was consensual. I suppose one could argue Bill used the power of his office to seduce Lewinsky, but I don't think it washes.

Either way, Lewinsky deserved better than she got. From everyone.

I go to school in California and it is amazing how badly managed it is, you cannot even clear trees from your own property or bulldoze fire lines, I guess this is why the other states don't have constant fires like Trump said. you also can't go hiking or camping without paying $22 for some permit and there are rangers everywhere trying to ticket you. I have a disabled friend with an electric bike and they would not let her ride it on the bike trail. It must be this bad in New York too.

"Con man exposed: Trump’s acting so erratic because midterms made him look like a loser"

Nothing was ever hidden. The Republican Party knew from the primaries the extent of the Cons criminal activities but at first they didn't think he would get the nomination. They knew about Russian involvement in the election but seeing that they were receiving financial support from Russian oligarch themselves they chose to ignore the issues and threaten to engage in a partisan fight if President Obama went public with the the information and this was in Oct 2016. Looking at the racist frenzy that Tepublican voters had worked themselves into because of tRump, the Republican Leadership weighted the benefits of not nominating tRump because they had a choice, to what they could actually gain by getting him in the WH. They gambled on the short term gain in the courts but now are facing the reality of the long game. Democratic's needed 23 seats to take the house in the midterms. They have gained 33. Counting is still going on so it's possible for them to gain between 35-40. That's a Wave no matter how many trolls on this site and others try to minimize it. That's a wave that has tRump canceling public appearances, firing people and brooding in his bedroom watching Fox hoping to get an "Atta boy, it ain't so bad" from his state run TV show.

"Conservatives have gone fully fact-free: So how the heck do we even talk to them?"

I've fully embraced self righteousness. I will calmly say, "It's so heartbreaking to see otherwise good people taken in by a culture of cruelty. I've always thought of you as a kind and decent person until Trump's influence." It has the benefit of being mostly true. They can call me a snowflake, and I will respond that I am not ashamed to be disturbed by bigotry and violence.