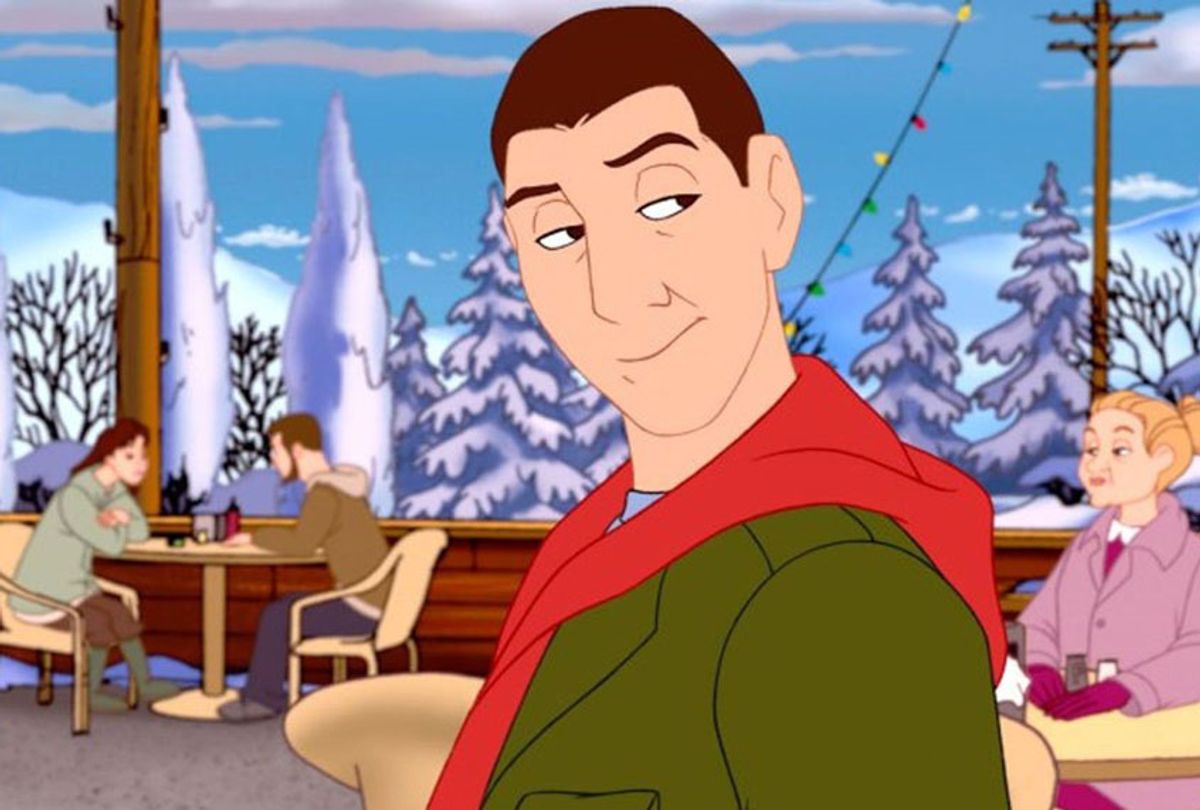 There aren't enough creative Yiddish insults in the world to adequately express how much I hate Adam Sandler's "Eight Crazy Nights."

It isn't simply because the 2002 film is another so-called comedy from Sandler that fails to include any funny jokes. By now, he's churned out so many of those that to get riled up over the presence of another one — particularly a film that was released over a decade-and-a-half ago — would be a waste of time.

But the problem with "Eight Crazy Nights" is that it is the most famous Hanukkah movie out there. While Christians have a bevy of universally beloved Christmas classics to fill their hearts with yuletide cheer ("It's a Wonderful Life," "A Christmas Story," "Home Alone," "Miracle on 34th Street," "Elf" and "National Lampoon's Christmas Vacation," just to get started), this is pretty much the only film that is widely associated with Hanukkah.

And it isn't just awful. It's aggressively awful, the kind of awful that makes you suspect the filmmakers actively hate their viewers and wish to cause them pain.

Sandler stars as "33-year-old crazy Jewish guy" Davey Stone, an alcoholic ne'er-do-well who casually commits assault, theft and large-scale property destruction while behaving like a juvenile boor and antisocial creep to pretty much everyone around him. When his antics risk getting him thrown in prison for ten years, however, a kindly old man named Whitey Duvall (also voiced by Sandler) and his twin sister Eleanore (Sandler again) take him under their wing and attempt to rehabilitate him.

That's pretty much it in terms of the story: There is a half-hearted subplot about Sandler trying to win back his childhood sweetheart Jennifer Friedman (Sandler's real-life wife Jackie Titone), but the movie invests so little care in developing that story that to call it perfunctory would unfairly malign hackneyed writing everywhere. Indeed, the film devotes far more care to its abundant product placement — which receives not just a prolonged comedy monologue but a showstopping musical number at the movie's climax — then it does to Stone's love interest.

All of this adds up to a mighty thin story (a truism for most 21st century Sandler fare), but that would be forgivable if it was at least funny. Yet the movie's ideas of comedy can be reduced to four basic formulas: (1) Identify another person's physical abnormality (obesity, hairy buttocks, baldness, missing or extra appendage, etc.), then point and laugh; (2) Include a character who is from a marginalized group (an Asian person, a transgender person, a little person), then point and laugh; (3) Show feces, urine and other bodily excretions because they exist and are therefore funny; and (4) Show Sander acting like a sociopath and cheer him on, since the movie will inevitably try to force an unconvincing redemption for him at the end, so audiences won't have to feel badly about enjoying his misanthropic "antics."

That last point deserves some extra attention here. In his review for the film, Roger Ebert observed that "there is also an odd disconnect between Sandler's pride in his Jewishness, which is admirable, and his willingness to display the obnoxious behavior of this particular Jewish character to an audience that may not get the point." Since I am also a 33-year-old crazy Jewish guy, I can safely say that Stone's character seemed like the kind of caricature an anti-Semite would come up with if he wanted individuals who had never met a Jew to have the worst possible impression of them. While I don't think Sandler is a self-hating Jew, the irresponsibility of his characterization is galling, especially considering that Stone is the only major Jewish character in the entire story.

And that speaks to another deeper problem with "Eight Crazy Nights" — namely, that it's a movie about one of the most famous Jewish holidays that contains virtually no distinctly Jewish content. Indeed, one could easily rewrite this script to remove Stone's Jewishness, and Hanukkah altogether, and it wouldn't be substantially different. If there were more Jewish characters or some kind of distinctly Jewish message, the viciousness of Stone's character wouldn't be so problematic. Because he is meant to embody everything that is "Jewish" in the world of this movie, however, the overall message about Jewish people becomes unintentionally troubling.

For a helpful contrast, compare "Eight Crazy Nights" to "The Hebrew Hammer," a 2003 comedy written and directed by Jonathan Kesselman that flopped at the box office and is a little-known cult classic today. I wouldn't go so far as to say that "The Hebrew Hammer," starring Adam Goldberg as the titular hero, Judy Greer as his love interest and Andy Dick as the villain, is a good movie — it's an overly-broad private eye spoof — but it's a Hanukkah movie that actually devotes the bulk of its jokes to poking fun at Jewish culture and religion. Indeed, the beginning of the movie is so strong that I would recommend it on the basis of that half-hour alone: An opening flashback to the main character's childhood reminded me of anti-Semitic bullying that I experienced myself, the protagonist's tempestuous but affectionate relationship with his mother definitely struck home as well, and early sight gags that poked fun at conspiracy theories about Jewish control of the media landed with more intelligence than the entirety of Sandler's cinematic oeuvre.

While "The Hebrew Hammer" runs out of gas during its final hour, even when it's failing, it at least strives for wit. The only genuinely painful parts to watch now are those with Dick pouting and gnashing his teeth in the villain's role (he's an anti-Semitic Santa Claus); Dick revealed himself to be a bona fide anti-Semite during a 2011 rant against Jewish comedian Howard Stern (he claims he privately apologized), whose response had far more insight into the pain Jews feel when confronted with prejudice than anything in either of these movies.

Indeed, there is one scene in "The Hebrew Hammer" that really speaks to the problem with "Eight Crazy Nights": Two Jewish characters at the Jewish Justice League begin bickering about whether to produce more Adam Sandler movies, a joke that is made in reference to the fact that Sandler was one of the world's most famous Jewish comedians at that time. This really gets to the heart of why "Eight Crazy Nights" grates so badly: For much of the '90s and '00s, Sandler was the face of Jewish people when it came to Jewish comedy — rivaled only by Jerry Seinfeld and Jon Stewart — and he arguably is still one of the most recognizably Jewish comedians out there. Yet while other famously Jewish comedians like Groucho Marx, Gilda Radner, Lenny Bruce, Mel Brooks and Joan Rivers all expressed pride in their identity with care as well as playfulness (and the same can be said of Seinfeld and Stewart), Sandler's approach is downright lazy.

That lack of attention to detail shows throughout "Eight Crazy Nights," too. If Santa Claus is willing to grant one wish to this 33-year-old crazy Jewish guy, it is for a better Hanukkah movie to dethrone this one as the film most widely associated with this holiday. When it comes to comedy, "Eight Crazy Nights" provides bupkes.