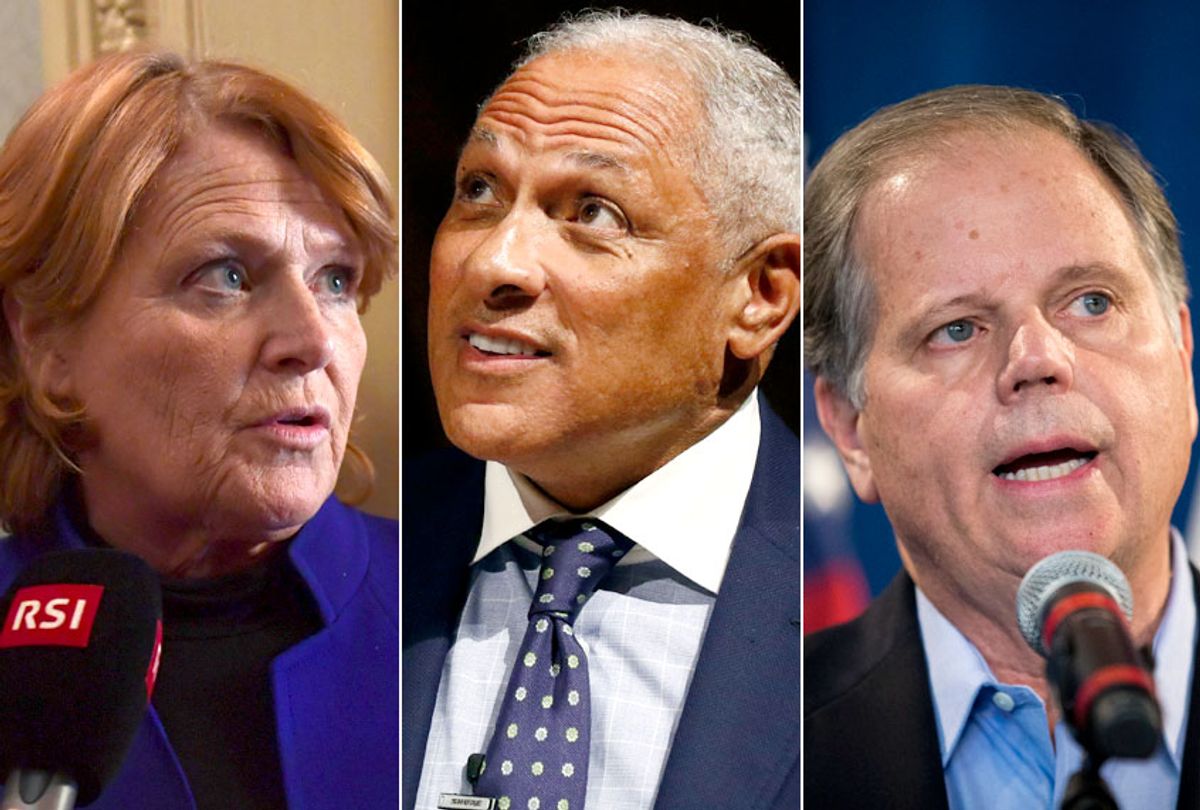 There are some striking parallels between last week's Mississippi Senate runoff, in which Republican Cindy Hyde-Smith defeated Democrat Mike Espy, and two other recent Senate elections in red states in which the Democrat wound up having a stronger campaign than would normally be expected.

Like in North Dakota, with Republican Kevin Cramer versus Democrat Heidi Heitkamp, and last year's special election in Alabama, between Republican Roy Moore and Democrat Doug Jones, the Republican candidate in Mississippi was mired in controversy, while the Democratic challenger attempted to be as non-controversial as possible by identifying with the party's centrist wing. But while the Democrat won in Alabama, Republicans prevailed in both Mississippi and North Dakota. It is worth examining why.

The first object lesson is that Republicans lost in Alabama because Roy Moore crossed a red line even for a party that has remarkably few thresholds for depravity.

Because Moore had been accused of sexual misconduct by a number of women — women, to be clear, who were underage at the time the alleged incidents occurred — even many Republicans found it necessary to denounce him or at the very least distance themselves from his campaign, allowing for a Democrat to win a state that had gone for Donald Trump by nearly 30 points only one year before.

While Hyde-Smith still managed to win more than three-quarters of white voters in the state, she significantly underperformed in Mississippi compared to the previous Republican senator to hold that seat and compared to Trump in 2016. Her Democratic challenger, Mike Espy took ten points off Trump’s winning margin.

Although Hyde-Smith had initially run as a more moderate Republican — indeed, her primary opponent Chris McDaniel attacked her as insufficiently conservative — she made a number of racist "gaffes" while running against an African-American opponent in the general. These included joking with a supporter about attending a public hanging, talking about how she would support stopping liberals from voting and failing to adequately address the controversy over her having attended a segregation academy as a child, as well as sending her daughter to a school founded as a segregation academy.

"Mississippi leans about 15 points more Republicans than the country overall, according to our partisan lean metric," explained Sarah Frostenson of Fivethirtyeight.com. "And Hyde-Smith is likely to end up winning by a margin in the high single digits — a sign that her campaign, which was pretty poorly run and dogged by controversies, cost her some votes. A less controversial GOP candidate likely would have won by more."

"The other big takeaway is the various racial controversies around Hyde-Smith probably did hurt her," added Perry Bacon Jr. "A strong GOP candidate likely would have won by more."

In neighboring Alabama, Roy Moore had a very controversial known past even before the explosive accusations of child molestation were made. As a judge, he was an unapologetic theocrat who refused to remove a monument to the Ten Commandments, ordered probate judges not to follow a Supreme Court ruling legalizing same-sex marriages, called for Christianity to directly influence government policy and said homosexuality should be illegal. It says something that these views not only weren't a hinderance to his Senate ambitions in Alabama; it is quite likely that they helped him win the Republican primary in that state over his comparatively more moderate opponent, Sen. Luther Strange. While it is certainly a good thing that the suspicion of serially preying on underage girls ultimately worked against Moore, it is also telling that other factors which could have worked against him in that race had not done so. It took multiple accusations to bring Judge Moore down to defeat and elevate former United States Attorney Jones to the Senate.

This brings us to the North Dakota election. There a Democratic incumbent, Sen. Heidi Heitkamp, fought for her political life against Republican Rep. Kevin Cramer. Although Heitkamp was in a state that Trump had won by 36 percentage points in 2016, it is not inconceivable that she could have retained her seat. Indeed, Heitkamp had emerged as one of Trump's closest Democratic allies in the Senate and identified with the party's more conservative wing. What's more, Cramer had a history of making controversial comments about women, from saying that he would vote for Brett Kavanaugh's confirmation to the Supreme Court even if the sexual misconduct accusations against him were true to deriding #MeToo as a "movement toward victimization" and linking abortions to school shootings.

Yet Heitkamp was harmed by a campaign misstep — that is, running an ad that accidentally identified sexual assault survivors. Although she later apologized for doing this, she broke one of the first rules of running for higher office as a Democrat in a Republican state, which is that your margin for error is virtually non-existent. It also didn't help that Cramer's views toward women were not regarded as controversial among many of his fellow conservatives.

The bottom line, therefore, is that Republican bad behavior can hurt the party's candidates even in states that seem to fortresses for the GOP.