"And in the spirit of the holidays, let me just say it is fun to watch these stooges squirm” 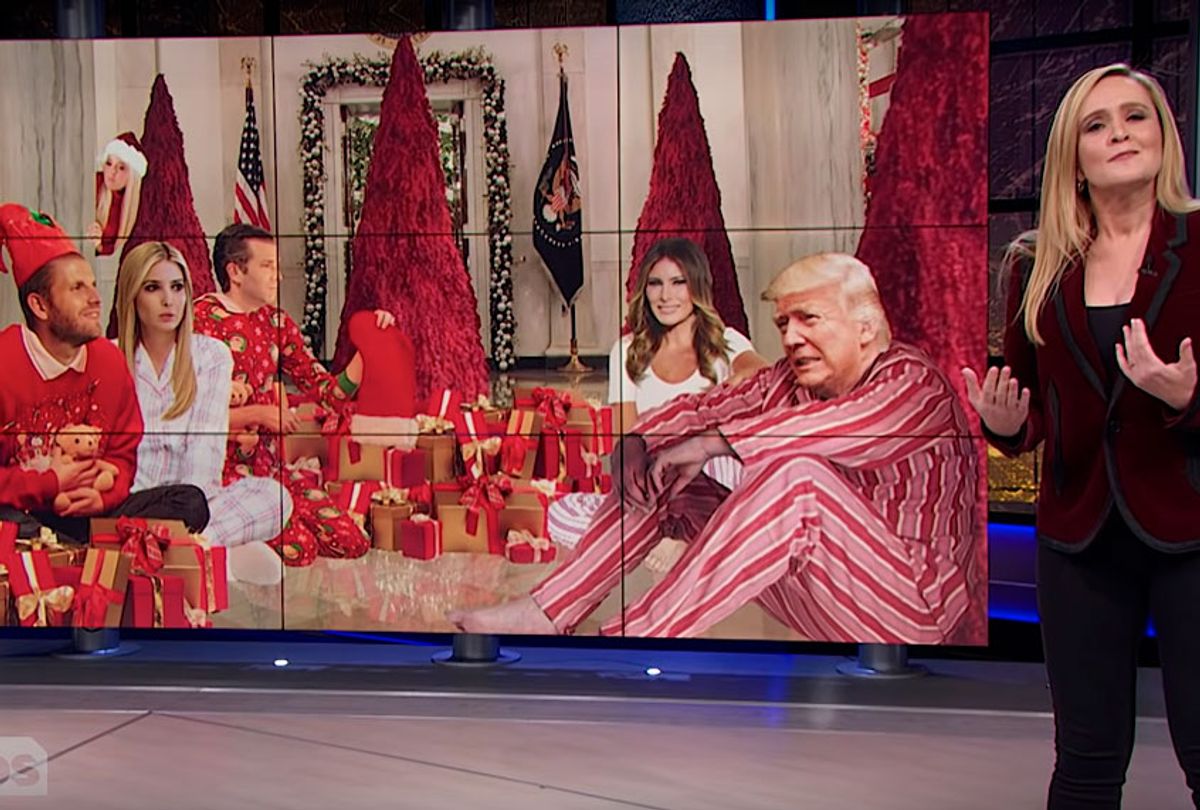 Samantha Bee, the host of the TBS show "Full Frontal," explained on Wednesday that when former Donald Trump adviser Roger Stone is caught lying, he has a rather obvious tell.

"In recent weeks Roger Stone has repeatedly denied ever communicating with Julian Assange about the Clinton campaign's emails," Bee told her audience on Wednesday. "Yesterday Stone announced that he'll plead the Fifth and refuse to testify before the Senate, marking the first time he's ever shut up in his life. It's probably wise: Stone appears to have a tell when he's caught doing something wrong. See if you can spot it."

At that point, she showed a clip of Stone being asked about any possible ties between himself and Julian Assange, the publisher of WikiLeaks who has numerous connections to the Russian government. As Stone was confronted with more and more evidence of his ties to Assange, he repeatedly sucks on his teeth, lips and tongue in nervousness.

"Ewww. Either that's the face Roger Stone makes when he knows that he's lying or he can smell children in the building. One Trump associate after another is turning out to be in deep, deep trouble!" Bee quipped.

"It’s a little hard to believe that longtime Trump friend Roger Stone didn’t collaborate with Wikileaks,” she continued, “considering he dresses like he collaborates with the Joker to destroy Gotham City.”

It is clear that President Trump doesn't want Stone cooperating with the investigation of special counsel Robert Mueller into potential collusion between his campaign and Russia. Earlier this week, Trump tweeted that "'Michael Cohen asks judge for no Prison Time.' You mean he can do all of the TERRIBLE, unrelated to Trump, things having to do with fraud, big loans, Taxis, etc., and not serve a long prison term? He makes up stories to get a GREAT & ALREADY reduced deal for himself, and get his wife and father-in-law (who has the money?) off Scott Free. He lied for this outcome and should, in my opinion, serve a full and complete sentence."

He later added in a separate tweet, "'I will never testify against Trump.' This statement was recently made by Roger Stone, essentially stating that he will not be forced by a rogue and out of control prosecutor to make up lies and stories about 'President Trump.' Nice to know that some people still have 'guts!'"

Stone also spoke to Salon last year in which he vehemently denied any connection with Russia, even though he had mystifying speculated that the Russian government may have been behind a hit-and-run against him because they wouldn't want him to talk about what he knows. Stone's work as a political hatchet man goes all the way back to his time employed by President Richard Nixon.

“Lying to federal investigators [is] a crime,” Bee reminded her audience. “We don’t know if any of this will come back on Trump in the end, but at least a few more of the people who surround him will go to jail. And in the spirit of the holidays, let me just say it is fun to watch these stooges squirm.”

Bee also went after Fox News host Sean Hannity for continuing to insist that Mueller merely asking Trump questions involves some kind of demand for "testi-lying" (she observed that this is a term better used to describe women pretending testicles aren't disgusting) and, in general, observed how the noose seems to be closing in on Trump's inner circle when it comes to the Trump-Russia scandal.

“One Trump associate after another is turning out to be in deep, deep trouble,” she said. “So this holiday season, as the Trumps gather around the blood tree, Trump will probably be at least a little afraid that it’ll be his last Christmas in the White House. Mueller Christmas, everyone!”