"South Park" vs. Amazon's Jeff Bezos: Not quite a takedown in season finale 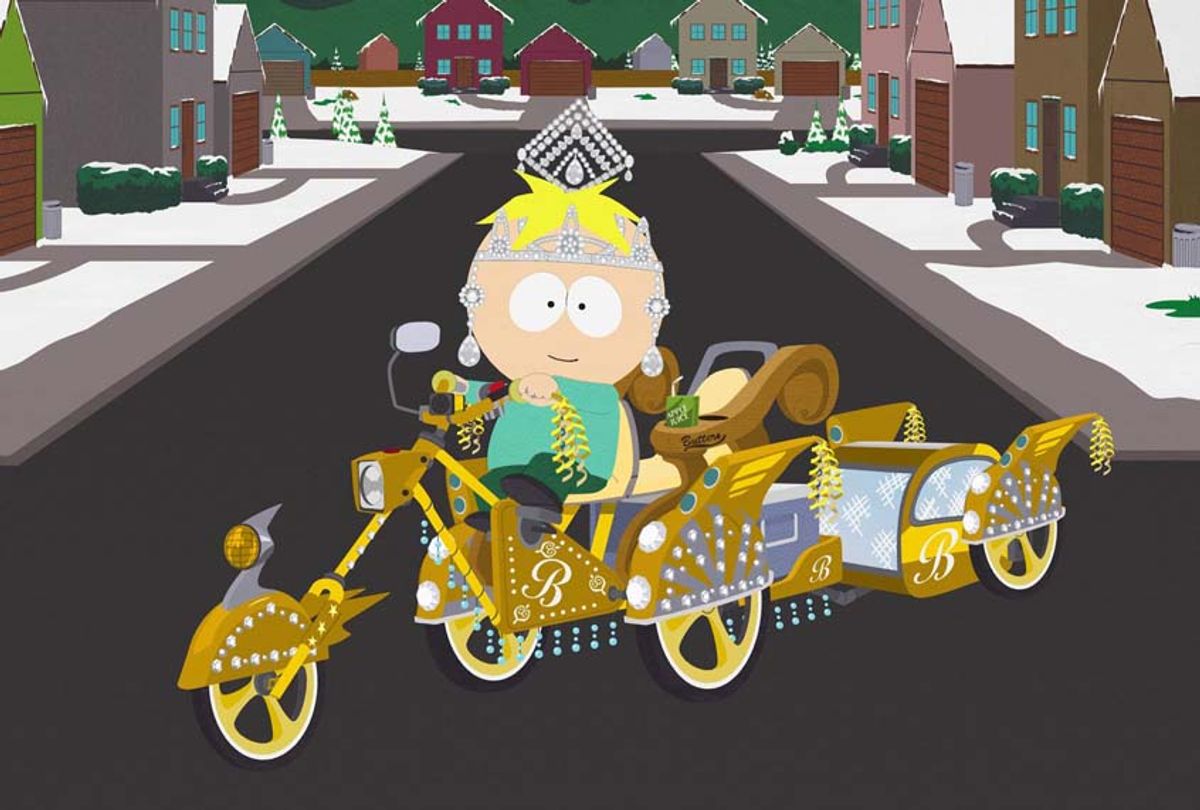 After 22 seasons, "South Park" creators Trey Parker and Matt Stone have established a pretty reliable formula for their satire: They look at a few subjects that are trending in pop culture, politics or society in general at a given moment, find a humorous angle for them and then cram as many as they think can fit into their stories. The upshot here is that, because it only takes them a few days to produce an episode, they can create plots and gags which are topical and fresh. The danger, though, is that when they try to do too much in a single half-hour teleplay, they wind up creating an unfocused muddle rather than incisive satire.

It continues where the previous episode, "Unfulfilled," left off. Amazon CEO Jeff Bezos has taken over South Park by forcing nearly all of its inhabitants to simultaneously work for and purchase their consumer goods from his company. The disgruntled Amazon workers strike under the leadership of a socialist protester named Josh who, due to a workplace injury, has now literally become an Amazon box filled with organs. Because the South Park boys want to win an upcoming bike parade, Stan (Parker), Kyle (Stone), Kenny (Stone) and Cartman (Parker) help Bezos by sending former mall workers (spoofing the Morlocks from "The Time Machine") into the warehouse as scabs so they can get their products sooner. At the same time Stan's father Randy (Parker) is taking his marijuana business to the next level by using eScooters to bring baggies of pot directly to his customers.

Parker and Stone juggle too many plot threads at once to really do anything interesting with them, resulting in just a couple of laugh-out-loud moments throughout the episode: when Bezos kills Josh by tricking a bunch of children into thinking he's a Christmas present (it wasn't the gory death that amused me so much as the subtly evil way Bezos chuckled to himself after the innocent kid who "won" what was inside the Marxist box got splattered with human organs), and when Randy Marsh's weed gets the whole town high and inspires them to unite against Bezos and deliver an impassioned speech against the malevolent billionaire — who immediately figures out that they're stoned because they're facing in the wrong direction.

Yet for every mildly effective joke, there are countless missed opportunities. It was established in the previous episode that the South Park boys were going to use immigration as a theme for their bicycles in the Bike Parade, which was a ripe opportunity for satire or at least some kind of edgy comedy. Instead the South Park creators did basically nothing with the idea aside from putting flags on the bikes so that viewers could try to figure out what countries they were from (the show confirms that one is the Philippines and the other two seemed to be from Mexico and either Egypt or Iraq). Similarly the themes of Bezos being a sinister humanoid and the town being gripped by class warfare were only briefly mentioned this time around, leaving the story arc that had been set up in the previous episode feel unfinished, somewhat diminishing the earlier story in the process.

In lieu of fleshing out these themes, Parker and Stone opted to throw in references to other plot threads that they had established earlier in the season. When Santa Claus comes to save the town from Amazon, he is disgusted to learn that they exiled Mr. Hanky in an earlier story after he told inappropriate jokes online (he also used the c-word and did so without being censored by a bleep). His decision to abandon them could have been funny or even poignant if it had been a major story point instead of a throwaway gag. The PC babies (illegitimate children of PC Principal and Strong Woman) also reappear here to cry at random things that upset their delicate sensibilities, but because this is only done sporadically, the joke has no build up and later punchlines involving them don't really land.

That theme of finding things offensive is, overall, only semi-realized in this story. When one of the South Park boys decides to quit the bike parade because he is converted to Josh's Marxism, the others attempt to vindictively get the event cancelled by pretending that something about it offends them. Once again, this could have been a funny idea and even a sharply satirical one, but Parker and Stone never flesh it out. The idea of pretending that they're offended is mentioned and half-heartedly executed before the plot moves on to another theme. In a similar vein, Cartman reacts to the news of one of the boys defecting by saying he's going to shoot up a school. This could have been a clever tie-in to the running joke about school shootings that has existed throughout Season 22, but aside from that one line, nothing comes of it.

It really is a shame because the episode's biggest payoff — namely, that Randy's marijuana winds up saving the day because people are simply happier and kinder when they're high — could have been hilarious. So too with the fact that Randy's company is called "Tegridy" which, because it sounds like "integrity," could have been a nice jab at Bezos being defeated by a human virtue that eludes his real-life counterpart. But for these types of jokes to work — whether in "South Park" or any other sitcom episode — they have to be fleshed out and built up during the story's running time. While it can be a good idea to refer to earlier episodes, it is important to decide early on whether they are going to be brief callbacks or fully realized and well-structured jokes. Regardless of which one you choose, though, they can never be so omnipresent that they force you to lose focus on the main story you're trying to tell.

At its best, "South Park" keeps its eyes on the prize and delivers memorable jokes with sharp satire. At its worst, Parker and Stone fail to balance out their numerous references and storylines and wind up creating a mildly satisfying comedy potpourri. It is to the series' credit that, even at its worst, it still can produce more laughs than your average banal sitcom. That said, the qualitative contrast between their high points and their low ones — as seen in the contrast between this episode and its direct predecessor from last week — illustrates that sometimes their weaknesses overpower their strengths.