"South Park" takes aim at Kavanaugh, Roseanne and "The Simpsons" in "The Problem With a Poo"

Good satire is focused. Last night's "South Park" episode "The Problem With a Poo" fails to land its punches 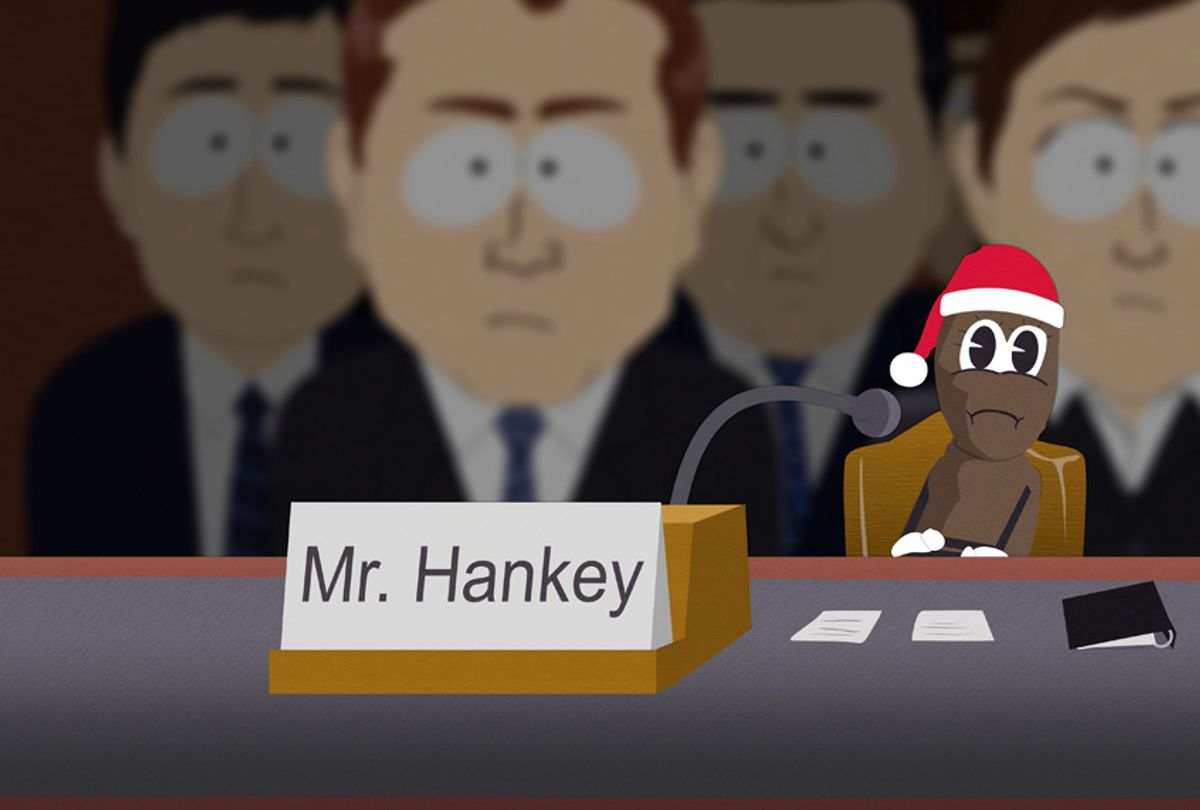 If you compare the most recent episode of "South Park" with its immediate predecessor, you have a case study in the difference between good satire and bad satire. In good satire, there is a clear focus on the subject you're ridiculing and the message you want to convey about it. While "South Park" achieved this last week with "A Boy and a Priest," which took on the Catholic Church's pedophilia scandal, it failed miserably in "The Problem with a Poo" because it didn't really know what it had to say.

There are two subplots in "The Problem with a Poo," each of which only tangentially connects with the other one. In Plot A, the talking piece of human feces known as Mr. Hankey the Christmas Poo (Trey Parker) learns that the budget for his annual Christmas show has been cut in half. Out of anger, Mr. Hankey begins posting offensive "jokes" on Twitter that only worsen his situation, getting him fired and ultimately resulting in a mass call for him to be run out of town.

As this plot thread proceeds, various references are made to recent celebrity scandals: Mr. Hankey repeatedly blames his offensive jokes on Ambien, similar to comedian Roseanne Barr after her racist tweets about former presidential adviser Valerie Jarrett; he appears in a government hearing and sniffles like then-Supreme Court nominee Brett Kavanaugh while being interrogated by a parody of Sen. Sheldon Whitehouse, D-R.I.; and when Kyle Broflovski (Matt Stone) decides to defend Mr. Hankey by explaining that "I want to stand by my friend," he is warned by Eric Cartman (Parker) "Let's see how that goes for you in 2018."

All of these references could, in theory, add up to a larger point, but it's unclear what argument (if any) the "South Park" writers were trying to make. Is it condemning Mr. Hankey for making offensive comments, or at least for refusing to take responsibility for his actions? Not likely, considering that Mr. Hankey's tweets are played for laughs in the classic "South Park" style that revels in excessive vulgarity and deliberately offensive insults.

At the same time, the episode doesn't necessarily side with Mr. Hankey either. After all, the character has never been depicted as sympathetic or particularly desirous of helping others (something the "South Park" boys comment on when Kyle implores them for help). His insistence that the Christmas show is important seems more motivated by a need to placate his ego than out of genuine feelings of holiday cheer. Finally (spoiler alert), when Mr. Hankey is run out of town by the "South Park" residents who predict that he'll go to a place where racism is accepted, he relocates to Springfield, the setting of "The Simpsons" — a clear slap at the controversy over the show's character Apu, as well as the only reference to the documentary "The Problem with Apu" which inspires this episode's title.

The underlying problem here is a rampant one with American satire these days — namely, that many comedians mistake merely referencing pop culture or news items for actually commenting on them. There are certainly worse offenders than "South Park" in this regard (anyone familiar with the cinematic oeuvre of Aaron Seltzer and Jason Friedberg, including films like "Date Movie" and "Epic Movie," knows what I mean), but that doesn't excuse the laziness of this episode. Simply referencing Roseanne Barr or Brett Kavanaugh is not the same thing as having a point to make about them.

Plot B is more focused than Plot A, although that doesn't make it any funnier. The premise is simple: Vice Principal Strong Woman (April Stewart) is pregnant with quintuplets as a result of her affair with PC Principal (Parker) and both of them struggle to deal with it. Parker and Stone, who write the show as well as star in it, use this to make two jokes: First, that the two progressive characters can't cope with being parents because doing so would force them to admit that they had a verboten interoffice romance; and second, that the babies which are eventually born are PC like their father and, as a result, cry at absolutely anything and everything that is even mildly offensive (a Speedy Gonzalez shirt, a Monica Lewinsky joke, absolutely nothing at all).

Unlike Plot A, Plot B does have a clear target in its sight and a point that it wants to make. The problem, however, is that none of those jokes actually land. It isn't nearly as edgy or subversive to mock political correctness as the "South Park" scribes seem to believe (Comedy Central is full of comedians who have made their careers specializing in precisely that), and while that doesn't make it impossible to mine new material from this particular ore, the jokes have to be original or at least clever to be effective. This "South Park" episode simply repeats the timeworn notion that political correctness makes people too sensitive, but it doesn't have any fresh spin on that idea.

Contrast this with "A Boy and a Priest." In that episode, both Plot A and Plot B revolve around the same theme. Father Maxi (Stone) is tired of being ridiculed during Sunday church ceremonies because of the Catholic Church's sex scandals and struggles with shame over having known about the abuses and not doing more to stop them. Plot A involves his efforts to bond with Butters (Stone), the one person in the community who still has respect for the church, while Plot B involves the efforts of three decidedly creepy Catholic clergymen to cover up for Father Maxi after the townspeople grow restless over his decision to close the church and they wrongly assume that he has committed sex abuse.

Here Parker and Stone had a clear idea of the subject they wanted to ridicule (the Catholic Church) and what they wanted to say (that it can serve a legitimate spiritual function but needs to clamp down on the abuses of its members). Once again, this isn't exactly a bold or controversial position, but "South Park" manages to make their episode work by presenting it in a surprisingly powerful way. When Father Maxi admits that he was aware of the sexual abuse in the church and did nothing to stop it, this is more than a reference to the controversial 2002 episode "Red Hot Catholic Love." It is a way of acknowledging that the knowing bystanders are, in their own way, just as guilty as the active perpetrators.

As a result, when Plots A and B intersect in the end with Father Maxi gruesomely murdering the priests trying to cover up his non-existent crimes, Parker and Stone provide catharsis for the viewers (who want to see these despicable characters pay the price) even as they teach a deeper lesson (redemption is possible when you recognize your mistakes and work to fix them). By the end, when Father Maxi is back in church and forced to once more listen to the snarky jokes of his parishioners, he doesn't seem to mind anymore; he realizes that perhaps, on some level, this is also a price he must pay for not having done more.

Given that "South Park" has been going for 22 seasons, it's understandable that not every episode it produces will be a winner. Nevertheless, it's disappointing that Parker and Stone couldn't have done more with the rich material given to them by the Brett Kavanaugh hearings, which the commercials led audiences to believe were going to be the focus of the story. Since Kavanaugh is actually barely referenced, one could make a complaint about false advertising. But if "The Problem with a Poo" had been funny, that wouldn't have mattered.