In her first post- "Roseanne" interview Roseanne Barr finds a pal in Sean Hannity, but loses her way immediately 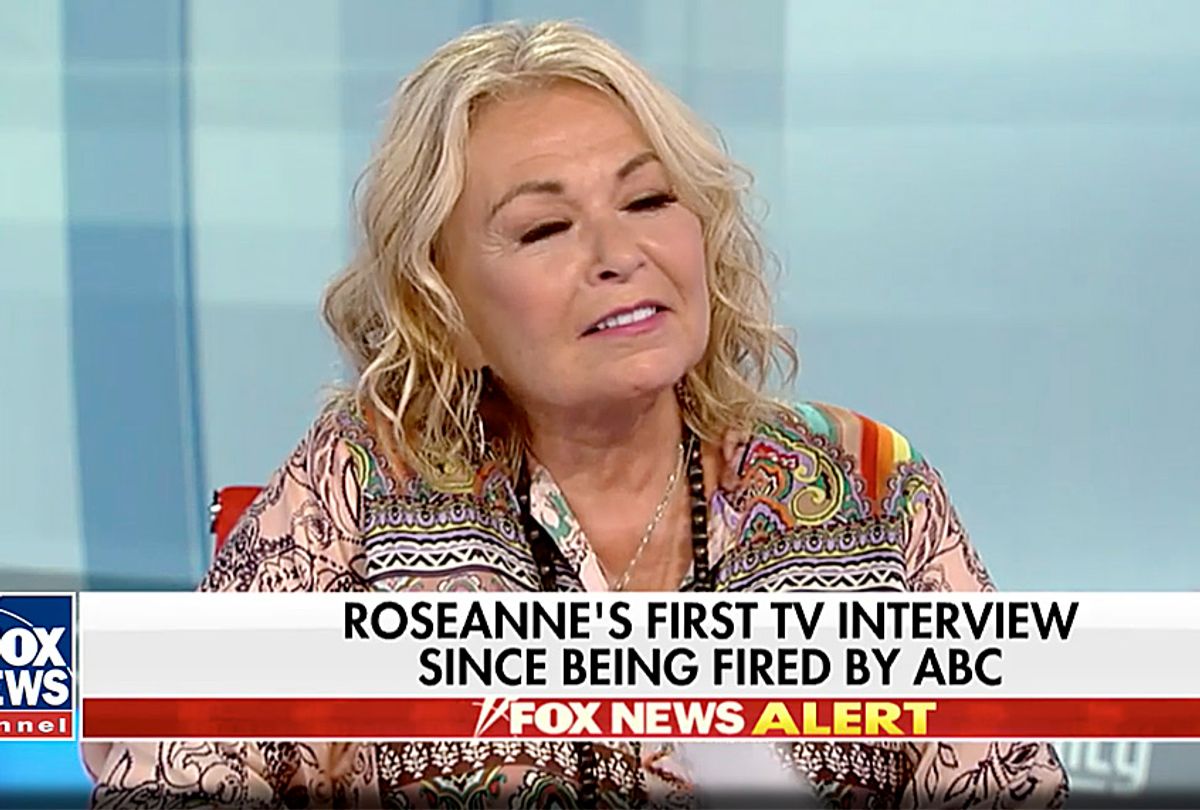 Call it the “Roseanne” spinoff we knew we never wanted.

In response to ABC moving on from Roseanne Barr with “The Conners,” the disgraced star took her pity party over to Fox News Channel on Thursday to bask in the support of Sean Hannity.

On "Hannity," Barr apologized and made excuses for her deplorable behavior, declared herself a champion of Israel and talked about her mental illness in ways that might make advocates for the mentally ill cringe. When asked about her past disclosure that she suffers from multiple personality disorder, Barr says, "Well, I don't suffer from it anymore. I enjoy it!"

All told Barr’s first interview on a major broadcast network since ABC fired her for posting a racist tweet was predictable, bizarre and bewildering. Memorable television too, no doubt.

At times on par with the weirdest episodes of early David Letterman, minus the witty and clever host. But it also proved that Barr, and the world, would benefit from an extended hiatus from the public eye.

The entire hour of Thursday's “Hannity” provided a platform for Barr, an avowed Trump booster, to drum up sympathy and insist that she’s not racist. This mirrors the faux-centrist Trump voter myth Barr folded into the “Roseanne” revival.

"To be misunderstood is the worst thing," says the woman whose return to broadcast TV garnered ABC its first No. 1 show in the Nielsen ratings in nearly two decades, who could have added millions of dollars to her bank account, and nevertheless wrecked it all because she can't resist trolling on Twitter.

Truly it is difficult to fathom why any marginally bright or sane person would do something so rash and dumb.

But who knows what Barr is thinking these days? Even at the end of her scatterbrained appearance, it was impossible to ascertain what she gained from it.

Throughout her unfiltered conversation with Hannity, which aired with limited commercial interruptions, Barr appears flustered and chastened if not entirely contrite. She struggles to complete a coherent thought in a rambling conversation that veers all over the road.

Before the interview begins Hannity warned his viewers that some parts of the interview would be controversial. “Some of it you may find offensive,” he says ominously. This was stupendous salesmanship but not the case. Nothing she says in the hour was new or freshly agitating. Occasional Hannity challenges Barr's wan attempts at equivocation, if only to herd her monologues toward some approximation of coherence. Rarely if ever does he call her on her numerous logical inconsistencies.

Then again, it was tough to make heads or tails of what she was saying and at any rate, that doesn't matter. Barr is the enemy of the mainstream media elite, and that makes her Hannity’s people. Enough said. And the enemy of the Fox News viewer’s enemy has an entire channel on YouTube where she plans to continue sharing her pseudo-psychedelic ramblings. If they like the way Hannity’s main bro Donald Trump speaks his mind, surely they love poor misconstrued Roseanne.

"I’m a creative genius,” she informs Hannity and his viewers, “and this is not a good feeling for an artist to be treated this way, and it's not a good feeling for a citizen either. And here's who I am: I'm somebody who cares about civil rights. . . . You call me racist. I don't accept it. I know who I am and uh, I'm not a racist. And the people who voted for Trump, they're not racists either and Trump isn't a racist.”

She goes on to say that although Americans have different opinions on a lot of topics, we all want the same thing: “We want people in the inner cities that are living in feces, and I'm talking about my son goes to school in San Francisco. I go up there, I don't just blab and run my mouth. I live my beliefs. I want people to know that. I live my beliefs. I try and of course I fail, but I try. I get back up and try again.”

These are her words, transcribed from a recording of the telecast.

Regarding her career-derailing tweet about Valerie Jarrett, the former senior adviser to president Barack Obama,  Barr first tosses out a joke: “Actually I was hacked!” She pauses. “Just kidding.”

She goes on to declare that we got it all wrong. The tweet is political, she says, not racist.

“I told ABC this at the beginning,” she says. “I will always defend Israel because I'm a Jew and I also have family that lives there. So that is a tweet about, I'm asking for accountability from the previous administration about the Iran deal, which Valerie Jarrett is the author of.”

The text of that tweet, deleted since its original posting but dated to May 29, 2018, reads “muslim brotherhood & planet of the apes had a baby=vj.”

What a concise political statement about Middle Eastern politics. Why didn’t we see it before?

Hannity, meanwhile, played the supportive partner who merely wanted America to forgive this pitiful, contrite woman. Mostly because in his words, “listen, P.C. is sickening.”

The tangle of nouns and verbs and contradictory hooey pouring out of Barr's face was a spectacle. Plus, Hannity gets to brag that he scored the first one-on-one conversation with the star, that he allowed her to unburden herself and that he witnessed her apology to Jarrett and to America first-hand.

Jarrett, meanwhile, had already informed the ladies of “The View” that she had no intention to watch this trainwreck. One assumes that on Thursday night she was living her best life.

Regardless of this, early in the hour Hannity’s urges Barr to address Jarrett and, you know, share her truest feels.

“Here’s what I have to say: let’s talk about it,” Barr says while looking directly to the camera lens. “Let’s really turn this into a teachable moment. We need to talk about race and uh, often everything that's connected to it, including not knowing that someone who looks like me, her skin tone is like mine. And I'm brown.”

Here comes Barr’s new favorite excuse, the replacement for the Ambien defense: she didn’t know Jarrett is black. “I assumed because she was a, you know, from Iran and living in Iran for such a long time and writes about how she and Barack Obama hung out for a long time and the reason they were so tight and such friends, it's because they, they don't like the idea of American exceptionalism,” Barr says.

Hannity then points out that regardless of a person’s cultural identity, that it’s wrong to compare them to apes. This does not compute with the star.

Later, Hannity makes a second attempt to ask Barr what she would say to Jarrett if she could speak to her directly.

The third time may or may not have been the charm, who even knows anymore. “I'm so sorry that you thought I was racist and that you thought that my tweet was racist because it wasn't,” Barr blathers. “It was political and um, I'm sorry for the misunderstanding that caused my ill-worded tweet, and uh, you know, I uh, I'm sorry that you feel harmed and hurt. I never meant that and for that I apologize. I never meant to hurt anybody or say anything negative about an entire race of people, which I think 30 years of my work can attest to.”

Throughout the hour Barr returns to this refrain about words meaning less than actions, pointing time and again to the African American children in her family, choking up as she refers to her “loving circle,” which includes Asian and Hispanic people. She mentions visiting and contributing to some of the poorest communities in America, located on Native American reservations. That she ran as the representative of the black caucus of the socialist party. “Black people chose me,” she says, “and I was humbled by that.”

No one should be disinclined to believe that Barr is generous and open-hearted — when the cameras aren’t on her and the world isn’t watching.

Charitable work is one thing, but her repugnant tweets and quotes in the press in which she’s antagonized other Jewish people, female comedians, Catholics, Republicans, members of the LGBTQ community and other marginalized groups paint a different picture. Barr says she’s not racist, but she has a habit of likening black women to apes. That’s what the public at large sees, and therefore, that’s what the public at large remembers. Fortunately for Barr, as Hannity points out, the average Fox News viewer is not an avid user of social media, so they probably won't be combing through her Twitter feed.

Until now she’s been able to get broadcast work time and again, get her kicks as a social media bully and Internet troll, cross the line, apologize, retreat and start the cycle over again. She pledges to quit social media and doesn't make good on that promise.

But in 2018, when “hate-triotism” (a term she’s coined) is at its peak and white nationalism is sweeping the land, it wasn’t wise to press her luck with an anxiety-ridden public and with a boss, Channing Dungey, who happens to be one of the most powerful black women in entertainment.

Hannity does not bring that up, of course. Instead, he simply asks Barr, when she posted that fatal tweet, “What did you not understand?”

“Why I don't understand a lot, to tell you the truth,” she replies.

That much is clear.

The director of "Eighth Grade" discusses the role social media plays in the lives of his teen characters.