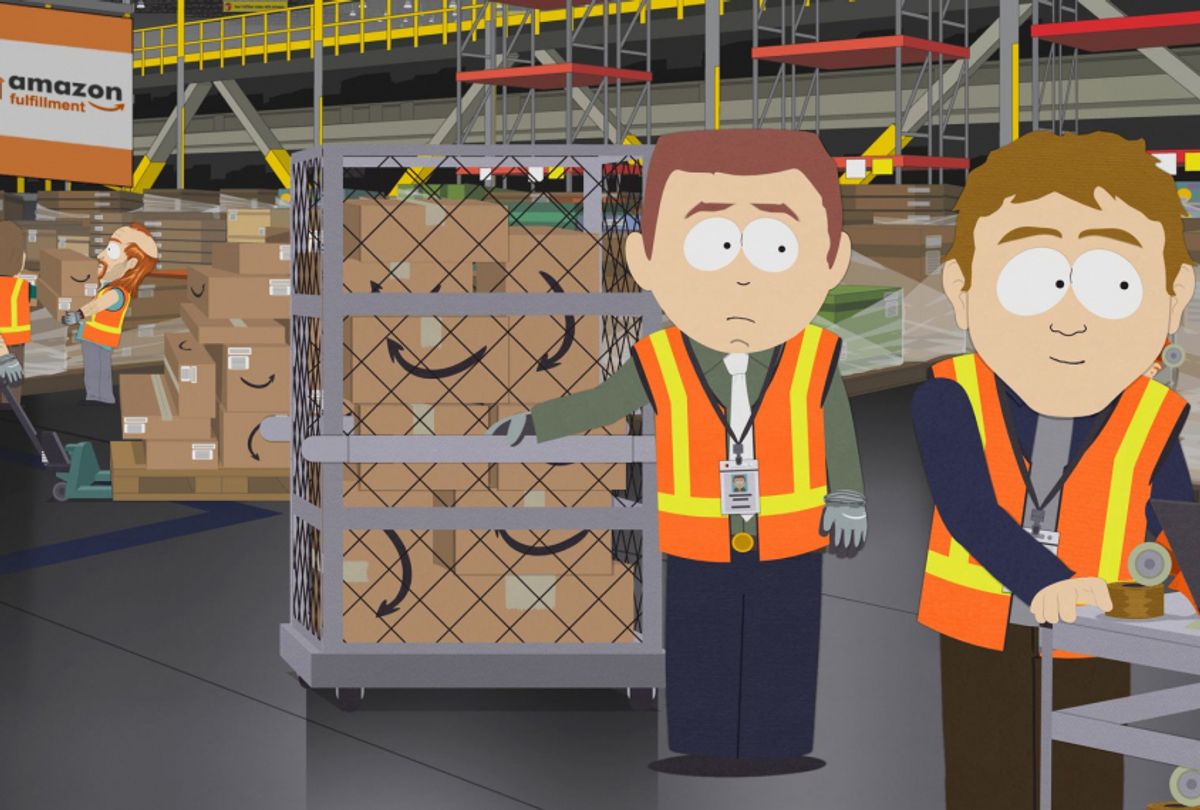 Last month, "South Park" released a two-part episode in which it traded its longstanding global warming denialism in favor of what amounted to a lengthy apology to former Vice President Al Gore. Last night, creators Trey Parker and Matt Stone released the first part of what looks like another two-part story arc, and this one might undermine another of the show's deep-rooted beliefs — namely, the virtues of free market capitalism.

The premise of "Unfulfilled" is superficially similar to the 2004 episode "Something Wall-Mart This Way Comes": Whereas the earlier story showed how the town's economic life was destroyed by the presence of a Walmart stand-in, this one shows how the arrival of an Amazon Fulfillment Center in the small Colorado community causes hundreds of townspeople to have to accept low-paying, exploitative jobs at the corporate behemoth's warehouse. In the main plot, the Amazon workers go on strike after the unsafe working conditions result in an employee named Josh being mangled by the machines, which the company then blames on employee error. This outrages the Amazon workers, with the exception of Stephen Stotch (Parker), who remains loyal to the company despite suffering from his own intense fatigue due to being overworked.

The darkly funny twist here is that Josh doesn't exactly die from his horrific injuries. Instead he spends the rest of the story as a literal Amazon box — one that cannot be opened lest his organs spill out, killing him — and preaches the virtues of socialism to a reporter who (understandably) is more curious about the exact nature of Josh's new biological structure. Yet when the Josh/box talks about income inequality, class exploitation and the fact that Amazon has created unconscionable conditions for its workers, Parker and Stone depict him as being absolutely right. The theme of Amazon as exploitative employer was reinforced earlier in the story with a visually eloquent montage of the dreary, bleak and oppressive lives of workers like Stotch set to the coal-mining dirge "Sixteen Tons," as well as in later gags that show Amazon controlling everything from the beers at a local bar to the social status of every member of the community (losing one's Prime status is apparently a fate worse than death).

If the episode has any weakness, it's that the secondary story is incredibly uninteresting. The South Park boys Stan (Parker), Kyle (Stone), Kenny (Stone) and Cartman (Parker) — as well as Butters (Stone) — are all planning on competing in a bicycle race, with their various schemes feeling like padding rather than a plot thread in which the writers feel any genuine investment. An off-hand reference to the four main characters deciding to ride with a theme of immigration, however, suggests that the next episode might be focused on that issue.

Yet when the episode has its sights set squarely on Amazon, it never misses. Most gratifying of all was the episode's skewering of Amazon CEO Jeff Bezos, who was treated with nauseating obsequiousness in a "Saturday Night Live" episode last month in which Steve Carell portrayed him as a hero of the anti-Donald Trump movement and Colin Jost proclaimed the communities that gained Amazon expansion offices had "won the lottery." Parker and Stone fall to the other extreme when it comes to their depiction of Bezos: in "South Park" he is a pale, wide-eyed humanoid boasting a grotesquely oversized and veiny cranium with a butt on the occiput, who communicates through telepathy and makes creepy comments about wanting people to be "fulfilled." It seems clear that Bezos is being set up as a villain — one who yearns to "return to Bezos and touch butts with my wife" — and, while it shouldn't take courage to characterize the early 21st-century equivalent of a robber baron as a literal monster, the low bar established by "SNL" makes this depiction particularly scathing in contrast.

It's all the more surprising considering that it comes from Parker and Stone, who in 2006 told a Reason magazine audience in Amsterdam that if any label could be applied to them, it was libertarian. This was demonstrated in past episodes that preached the virtues of large corporations ("Gnomes" from 1998), bemoaned the 2001 airline bailout as a crutch for lazy workers whose sloth meant their industry deserved to fail ("The Entity" from 2001) and depicted Ron Paul as the only reasonable Republican presidential candidate during the 2012 election ("Faith Hilling" from 2012). Although the pair have also been careful to not fasten that label to themselves — they clearly take pride in their iconoclasm — it is obvious that, at least in the past, the show has been inclined toward skepticism when it comes to denouncing large corporations and the underlying tenets of free-market capitalism.

Until we see the second part of "Unfulfilled" it will be unclear whether "South Park" has fully renounced that perspective in favor of a pro-labor standpoint, but it's hard to imagine the show scribes of the late '90s and early '00s writing something as unequivocally anti-capitalist as the episode which aired last night. While in terms of humor this episode doesn't rank among the series' best — its memorable jokes are the ones about Josh being a box and Bezos being a freak — it still has enough laughs in it to be worth watching, and for longtime followers of the show, it marks enough of an evolution from their earlier ideology to be intrinsically interesting. If Parker and Stone can do something worthwhile with the bicycle race subplot and increase the laugh quotient next week, "Unfulfilled" has the potential to become a highlight in "South Park" history.