Kyl had been appointed to replace the late Sen. John McCain on an interim basis by Arizona Gov. Doug Ducey 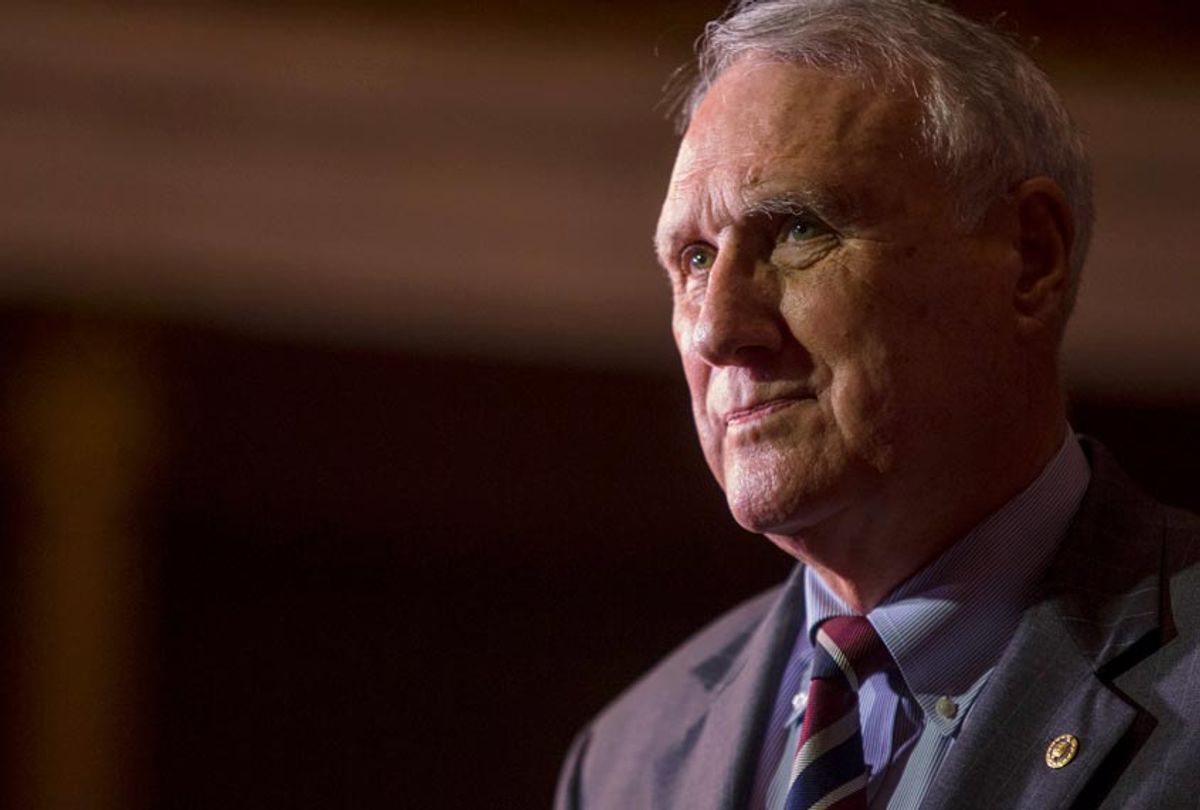 Sen. Jon Kyl (R-Ariz.), who was appointed by Arizona Gov. Doug Ducey (R) to replace the late Sen. John McCain on an interim basis, has indicated that he will resign at the end of this year before a special election will be held in 2020 to fill the last two years of McCain's term.

Kyl sent Ducey a letter Wednesday announcing his resignation, which will be effective at the end of this month, Politico reports.

"When I accepted your appointment, I agreed to complete the work of the 115th Congress and then reevaluate continuing to serve," Kyl wrote. "I have concluded that it would be best if I resign so that your new appointee can begin the new term with all other senators in January 2018 and can serve a full two (potentially four) years."

Kyl's decision to step down after the end of the session means that Ducey would be forced to appoint another replacement in the near future. In a statement, Ducey said, "Senator Kyl didn't need to return to the Senate. His legacy as one of Arizona's most influential and important political figures was already without question. But he did return, and I remain deeply grateful for his willingness to step up and serve again when Arizona needed him."

Kyl represented Arizona in the Senate for nearly two decades before retiring in 2013 after rising to become the second-highest ranking Republican senator and was tapped earlier this year to guide Associate Supreme Court Justice Brett Kavanaugh through his Senate confirmation hearings.

The Republican senator's decision not to run for-election means Democrats would potentially have a better shot at flipping the seat. Last month, Rep. Kyrsten Sinema (D-Ariz.) defeated Rep. Martha McSally (R-Ariz.) to fill the seat being vacated by retiring Sen. Jeff Flake (R-Ariz), making her the first Arizona Democrat elected to the upper chamber in 30 years. Trump defeated Hillary Clinton in Arizona by 3.5 percentage points — 48.1 percent to Clinton's 44.6 percent. Republicans have captured Arizona's 11 electoral voters in every presidential election cycle since 1952, except when former President Bill Clinton carried the state in 1996. During the 2018 midterm election cycle, McSally's share of the vote was close to Trump's at 48 percent, but Sinema came out on top with 49.7 percent.

McSally has reportedly been floated as a possible replacement for Kyl, but her failed Senate bid has caused some Arizona Republicans to question whether she would be the best choice for an appointment. An internal memo from the state's Republican Party, which was released within weeks of McSally's loss to Sinema, cast doubt on McSally's campaign's decision-making and drew troubling conclusions about Trump's chances of winning Arizona in 2020. The memo further suggests the once solidly-red state could have two Democrats in the Senate in less than two years.