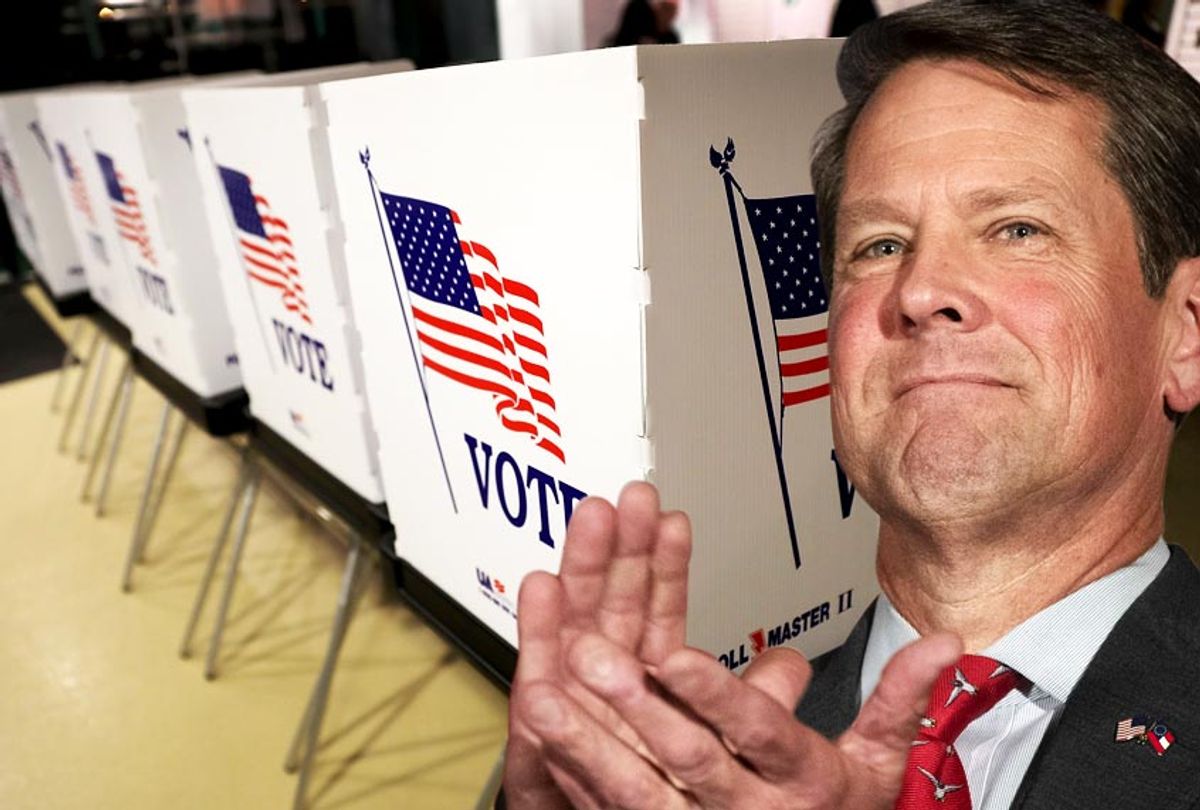 Brian Kemp, Georgia's Republican governor-elect, pushed a baseless claim alleging that Democrats hacked the state’s voter database days before the election he won by fewer than 60,000 votes, an investigation by The Atlanta Journal-Constitution has discovered.

Three days before the November election, then-Secretary of State Kemp was tied with Democrat Stacey Abrams in the polls amid criticism that he had improperly purged hundreds of thousands of voters from the state’s rolls. With just 72 hours before the vote, it was discovered that Kemp’s office had left the state’s voter registration system exposed on the internet. Kemp responded by accusing the Georgia Democratic Party of trying to hack into the voter database to try to affect the election.

The Journal-Constitution has now discovered, weeks after Kemp's narrow electoral victory, that there was “no evidence” backing any of Kemp’s allegations at the time and “none has emerged in the six weeks since.” It “appears unlikely that any crime occurred,” the newspaper concluded.

“There was no way a reasonable person would conclude this was an attempted attack,” University of Michigan computer scientist Matthew Bernhard told the Journal-Constitution.

Instead, the investigation found that Kemp and his staff used his secretary of state office to protect his gubernatorial campaign by launching baseless allegations. Kemp had refused to step down as the overseer of his own election despite repeated calls to do so.

“He was doing anything he could do to win,” Rebecca DeHart, executive director of the Democratic Party of Georgia, told The Journal-Constitution, adding that it “was an extraordinary abuse of power.”

Kemp did not respond to the report but denied any wrongdoing the day before the election.

“Because I can assure you if I hadn’t done anything and the story came out that something was going on, you’d be going, ‘Why didn’t you act?’” he said at the time. “I’m not worried about how it looks. I’m doing my job.”

Candice Broce, a spokesperson for the secretary of state’s office, told The Journal-Constitution that they handed over “extensive forensic evidence” of attempted hacks into the system, including "digital fingerprints of these thwarted attempts." Broce added that the office’s "expert cybersecurity vendors" concluded that "someone had spent a great deal of time and effort, utilizing specialized equipment, to attempt to infiltrate the secretary of state’s systems and that this attempt was potentially illegal.” Unlike Kemp, the spokeswoman did not tie the alleged hack attempt to Democrats.

The alleged hack attempts came after Kemp, in 2016, rejected the federal government’s assistance in securing the state’s voting systems. Kemp called the offer by the Obama administration an “overreach.”

“It seems like now it’s just the D.C. media and the bureaucrats, because of the DNC getting hacked – they now think our whole system is on the verge of disaster because some Russian’s going to tap into the voting system,” he told Politico at the time. “And that’s just not – I mean, anything is possible, but it’s not probable at all, the way our systems set up.”

Except that Georgia’s election system was revealed to have been completely exposed at the time Kemp made those comments. The personal data of voters and even passwords used by election supervisors were accessible to hackers.

Even after researchers discovered and reported the flaw, they discovered that nothing had been done to secure the voter database seven months later.

Kemp later accused the Obama administration of trying to hack into the state’s system in retaliation for his refusal of the government’s help. In June of 2017, the Homeland Security inspector general found that there was no evidence of a hack attempt.

Earlier this year, it was discovered that a flaw in the voter database allowed any user to download any file on the system, including identifiable voter information. Experts said the flaw would have allowed voters to be deleted from the system.

The Journal-Constitution reported that the Democratic Party’s only involvement was forwarding the concerns about the system to cybersecurity experts at Georgia Tech, who notified a federal security agency. The FBI then contacted Kemp’s office.

The next day, Kemp’s office was questioned about the concerns by a news outlet. One hour later, Kemp’s office fired off the baseless allegation that Democrats had attempted to hack the system and announced an investigation.

More than a month later, the state Democratic Party said it has not been contacted by a single law enforcement agency.

After her defeat, Abrams did not mince words when addressing Kemp’s baseless allegations and voter purges.

“Make no mistake: The former secretary of state was deliberate and intentional in his actions,” Abrams said. “I know that eight years of systemic disenfranchisement, disinvestment, and incompetence had its desired effect on the electoral process in Georgia.”