"You were thousands of miles away, lapping it up, life of luxury, playing politics," Hannity claims on his Fox show 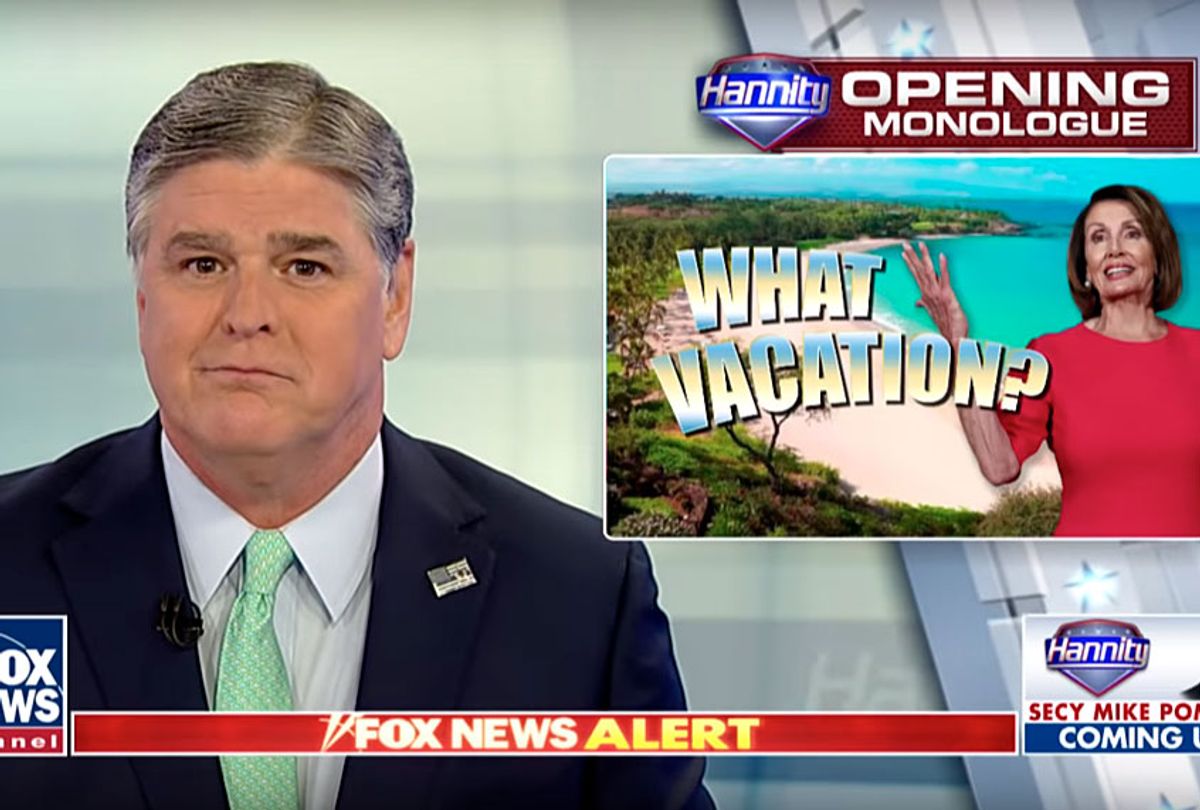 "Over this past weekend, we lost a police officer. His name was Officer Singh. This guy was in California," Hannity began, "and the sheriff of that county was on this show last night saying the sanctuary policies played a big part in what happened, because the murderer was involved in the criminal justice system and was never deported."

President Donald Trump appeared to see the case as an opportunity to call for stronger border security as he struggles to find support in Congress for his long-promised "wall" along the U.S.-Mexico border. Trump is demanding $5.6 billion to construct it but, so far, congressional Democrats refuse to give him the money. The impasse has caused a partial government shutdown that has now hit the two-week mark and appears to have no end in sight.

"There is right now a full scale manhunt going on in California for an illegal immigrant accused of shooting and killing a police officer during a traffic stop," Trump tweeted last week, referring to Gustavo Perez Arriaga, who prosecutors on Wednesday charged in connection with Singh's killing after a days long manhunt. "Time to get tough on Border Security. Build the Wall!"

The news and subsequent manhunt reignited a debate in California and across the U.S. over the Golden State's sanctuary law that limits local law enforcement's cooperation with federal immigration authorities, although they can report people convicted of some felonies to Immigrations and Customs Enforcement, or ICE.

"This is a criminal illegal alien with prior criminal activity that should have been reported to ICE," Stanislaus County Sheriff Adam Christianson said last week. "Law enforcement was prohibited because of sanctuary laws and that led to the encounter with (Cpl.) Singh . . . The outcome could have been different if law enforcement wasn't restricted."

"Why are we providing sanctuary for criminals, gang members?" the sheriff asked. "It's a conversation we need to have."

Hannity, on Thursday, appeared to agree with Christianson, casting blame on Pelosi, a Democrat from California, for Singh's brutal murder by suggesting she is not taking a tough enough stance on immigration by refusing to provide Trump with the funds he claims are necessary to build a wall along the southern border.

"Speaker Pelosi, the president was in the White House waiting to negotiate. You were thousands of miles away, lapping it up, life of luxury, playing politics with border security," Hannity said. "Americans died over the course of that weekend. Americans — an American hero police officer with a five-month-old son is no longer on this earth providing for his child."

Trump, however, admitted on Wednesday the reason the federal government remains only partially operational is because of his ego, confessing that he would "look foolish" if he allowed the government to reopen while wall funding was being negotiated.

As hundreds of thousands of federal workers continue to work without a paycheck, Trump has not spent the majority of the shutdown negotiating an end game, instead blaming Democrats for the shutdown he previously said he was proud to own.

The president also alleged that the thousands of workers either furloughed or working without pay "are Democrats" — just days after he claimed that "many" of those government employees told him they were fine with not getting paid so long as Congress does not fund his long-promised wall. (Both claims were offered without supporting evidence.)