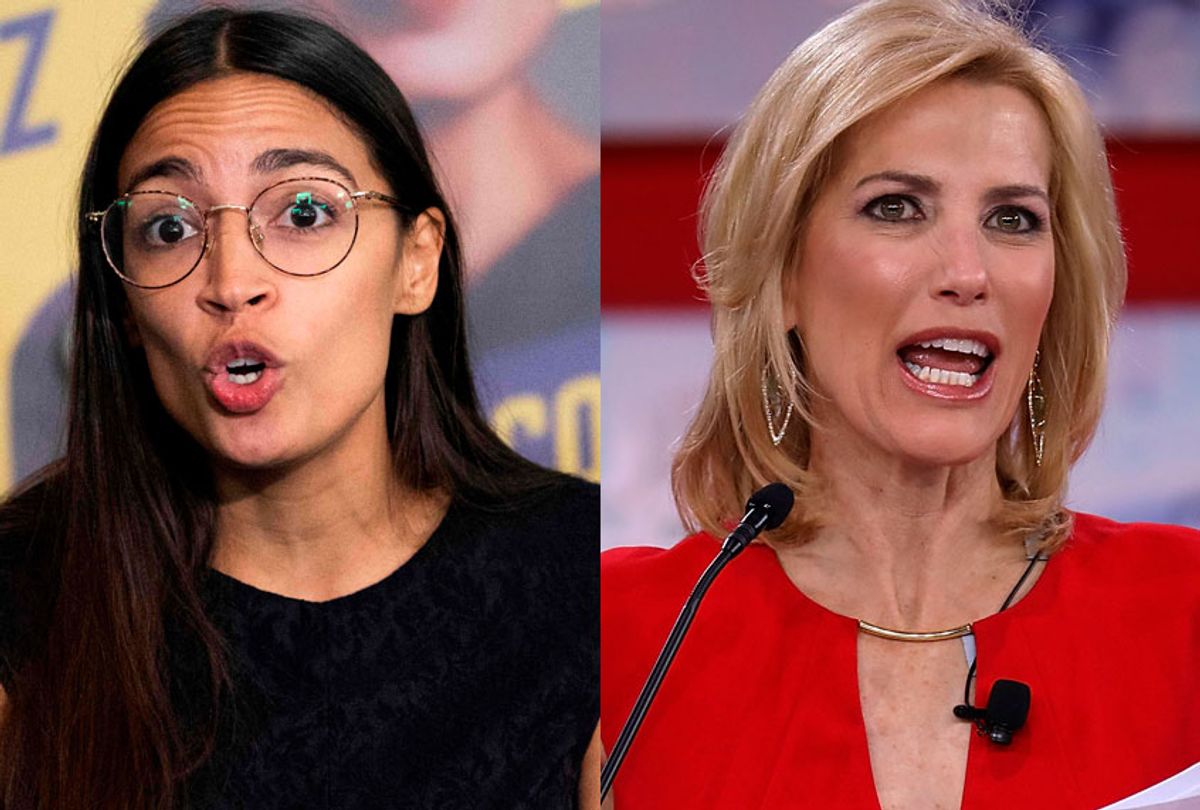 In Thursday's episode of "The Laura Ingraham Show Podcast," the Fox News primetime host claimed that Ocasio-Cortez was "continuing [an] effort to beat everything into the ground as a racist offense."

"So, when you can't debate a point, you throw back, 'White privilege – you can't understand. And then there's nowhere for that person to go. You shut down debate," she said. "Alexandria Ocasio-Cortez is trying that little trick on Tucker Carlson and me."

"You don't know me. Don't judge me. My authentic self has a right to speak and to make a living just like your authentic self — whatever that is. Progressive, Marxist, socialist — whatever you want to call it," Ingraham said, in reference to the New York congresswoman.

"But, you see: They are so eager to take away the rights of other people, as they claim to be the most tolerant people on the face of the planet," she continued.

"Let's learn about this, shall we?" the 29-year-old Democratic socialist's tweet began, "Many have recognized that @FoxNews has crossed a line beyond conservatism and into outright bigotry with their financing of Tucker Carlson and Laura Ingraham. Tucker finances the @DailyCaller, which posted fake nudes of me."

Ingraham on Thursday responded to Ocasio-Cortez's tweet and urged the Democratic socialist not to judge her. She then asked about "the privilege of being a protected member of a class that you can never criticize, lest you be called racist?"

Separately, Fox News pushed back on Ocasio-Cortez’s claim that Carlson financed “The Daily Caller.” "Tucker Carlson does not finance The Daily Caller in any way, nor does he have any role whatsoever in its editorial operations,” a spokesperson for the network told Salon. “She would have known that if she’d bothered to check.”

Carlson co-founded “The Daily Caller” in 2010 with Neil Patel, a former chief policy advisor to Vice President Cheney. He stepped down as editor-in-chief of the outlet in 2016 when he joined Fox News’ primetime line-up. At the time, he said he would maintain an ownership stake.

Ocasio-Cortez, who was sworn into the House of Representatives in January after Democrats reclaimed control of the lower chamber, has captured the attention of Americans of all political stripes and, along the way, has become a near constant target of the Republican Party's attacks and smears. So far, however, Ocasio-Cortez appears to be winning the rigged conservative shame game by refusing to play, my colleague Erin Keane wrote.

Still, the freshman congresswoman's vow to back primary challengers against party incumbents, her supporters' demand that she have a powerful House committee seat and her opposition to the Democratic rules package during her first days in office emerged as a source of tension on Capitol Hill. Most recently, Ocasio-Cortez promoted a group that recruits primary challengers to Democratic incumbents whom she believes are too moderate — a rare move for a sitting member of Congress.

"This country has only ever changed for the better by groups of people that were willing to put everything on the line for a better future," Ocasio-Cortez said in a video released by Justice Democrats, the progressive group that helped elect her. "It didn't happen by people playing it safe. It happened by people putting their whole lives on the line, because they understood that this isn't just about us.