Swept off her feet by a con artist: What Abby Ellin knows now about being "Duped"

Scamming season put grifters on notice. But it's the dupers — the emotional engagers — who are even more dangerous 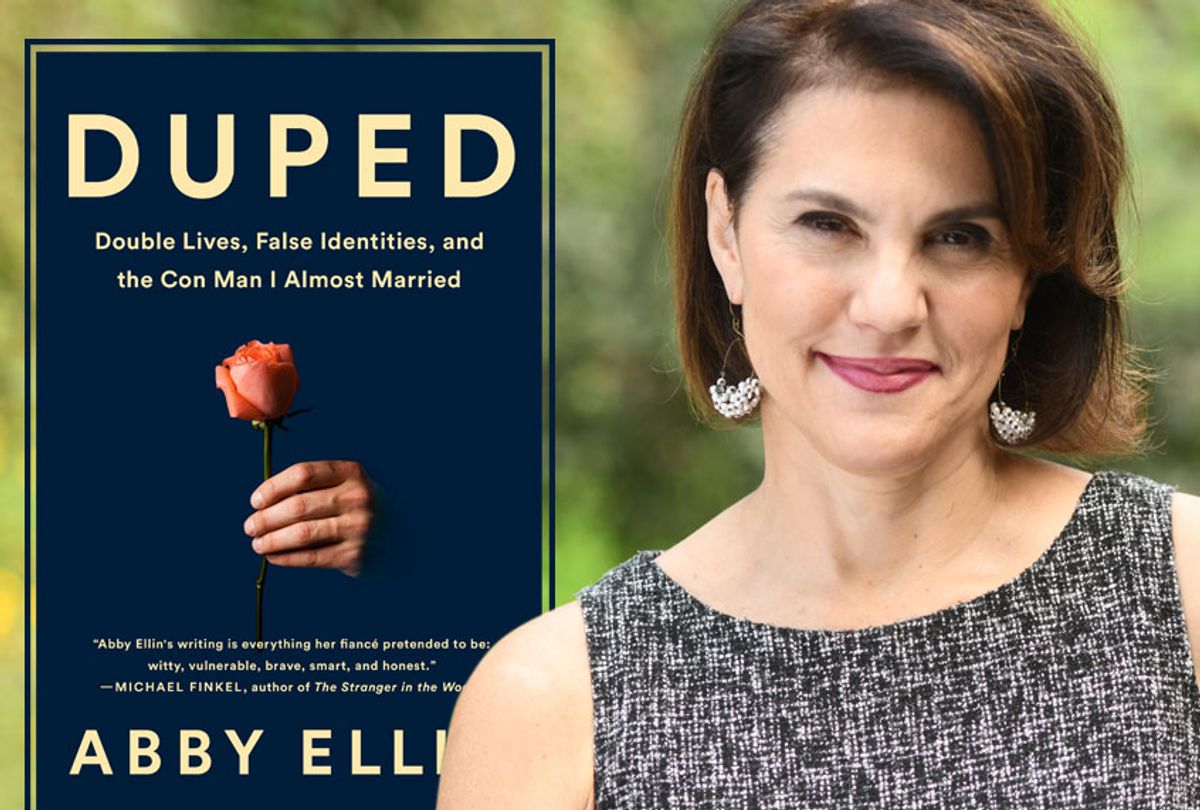 A few years ago, I ran into my friend Abby at a benefit gala for a cause we're both involved in. It was a pleasant surprise — she was no longer living in New York, and we'd fallen out of touch. As we spent time catching up on our lives, I was unsurprised that she, as usual, had a full slate of professional and personal pursuits going on. That night, she lit up as spoke about them. Little did I imagine she'd not too long before endured an utterly baffling, infuriating relationship with a man who was nothing he'd seemed to be.

Leave it to a journalist to turn heartache into a riveting memoir that's also an insightful investigation into the nature of emotional con artists. In "Duped: Double Lives, False Identities, and the Con Man I Almost Married," Abby Ellin reveals, with candor and humor, how she was swept off her feet by a divorced military doctor who dazzled her with his "big life of travel and adventure." The Commander, as Ellin refers to him in the book, kept just enough of a footing in truth to keep Abby's trust — so when his words or actions didn't add up, she assumed it was she who was getting things wrong.

Eventually, after they'd rather amicably broken up, she discovered he was under investigation for writing false prescriptions and had another fiancée in a different state. It's a story that will intrigue anyone who was hooked by "Dirty John"—as well as anybody who's every been fooled by love.

I talked with Abby recently via phone about and the art of separating the dupers of the world from the scammers.

People feel very judgmental about experiences like yours, which is why there is so much shame attached.

That, exactly. All these people are like, "She's an idiot." I'm prepared for that. I don't mind that. I moderated a panel that had to do with "Dirty John," and Deborah Newell was there, the real Deborah Newell. I met her and I really liked her very much, and there were two other women whose husbands had committed white collar fraud. So I looked at Deborah Newell and I looked at the other women, and you know what I thought to myself, and should know better? I thought, "Wow, why didn't you know?"

You know what? It depends. People say, "Trust but verify," and you have to do that I suppose. I almost think verify, but don't trust.

What's the difference between a duper and a scammer?

I think with a duper, there are more emotions involved. The person who is scamming you, that is a purely transactional thing. They want money, you know that's what they want. With the dupers, they get you emotionally engaged.

You talk about in the book about a subject that I am endlessly fascinated with — people who fake illness. There are cases where people shave their heads so that they can get people to give them money, but with a Dee Dee and Gypsy Blanchard or Belle Gibson case, I think that's a duper and a scammer, because there's an emotional high that they get out of that.

There were financial goals and the other goal was that she wanted people to feel for her, right? I think these are scammers to some degree, but it's different.

I think of Waldo Demara, the Great Imposter, or Frank Abagnale [the faker who inspired "Catch Me If You Can"]. They did it for fun. They did it because they were so smart. It was just, "I'm going to see what I can get away with." I totally get that.

And I can understand, "I will get money out of this and that's why I'm doing this." But the people who are just, "I'm going to lie to you and make you fall in love with me and tell you that I'm a completely different person," that is next-level bananas to me.

I didn't want to just focus on romance scams and things like that, because basically it's [all] the same kind of thing, right? This one lies about that, that one lies like that, but at the end of the day, it's someone who is not who they seem to be.

I was really interested in the example of Peter Young [a former fugitive "eco terrorist"] from the beginning of the book. He was always trying to get away with stuff. He was always doing that in his life even before he was on the run. I think that was a personality type, and that was what I was getting at. It wasn't why he did it. I know why he lied. He needed to lie to survive. It was how he lied, how he pulled it off. Certain personality types do that, and certain personalities are just good at it.

Well, because you have incentive not to pay attention to it. You have incentive if you're with somebody. I've been independent so long that for me to walk away [from the Commander], shocked, was really traumatic but I could do it. It was also just me, and we didn't have kids. Now imagine you're not like me in that regard. You have partner, you have kids with them, and you have a dog, and you have a house, and you have no income of your own, or you need a second income to survive. Or the person sitting next to you at your office is stealing and you know it and they're your boss, and you need your job. So you have really good, smart reasons to not see this stuff.

We all do that in one degree or another. We all have to overlook stuff. How else are you going to survive in a relationship if you don't ignore some things?

Well, that's exactly it. You have to survive. Paul Ekman, who's so brilliant, said, "You want to know the truth, but you want the truth to be what you want it to be".

I think we are all really do. When the wife says to the husband, "Do I look fat?" or whatever, and the husband's response is, "No, you have fabulous," you want him to tell you that, but you don't want him to be lying to you. You want that to be really the truth.

That’s a difference between men and women. Men are often lying to make themselves look better and women lie in general to protect other people's feelings, so it's other-oriented.

It's mind boggling and it's fascinating that if you're in any way an empathetic, caring, thoughtful person, you'll think, "Huh, maybe I did get that wrong." You go through that in the book, where even after you broke up with the Commander, you're wondering, "Did I miss the boat on this guy? Was I crazy to let him go? Did I not understand?"

You end up beating yourself up, and it's really crazy making.

That's why anyone is vulnerable to this. Certainly, some of us are more vulnerable than others, and as you explain, you're actually more vulnerable if you are open, enthusiastic, outgoing. If you're someone who is friendly and accessible,  it's not like you're gullible.

I'm not gullible. I try to make an active choice to give the benefit of the doubt. That's what it was. I would have these discussions with my friends, like, "I don't believe this s**t." They would say, "Well, this is what you're going to have to learn how to do. If you want to be in a relationship, you're going to have to just stop being suspicious."

Then you start to feel like, "This is on me." I feel like there are layers, and the first is, "I'm a bad person because I distrusted this person. I'm just too suspicious or I misunderstood; I'm too dumb," or whatever. Then you go into, "How could I have been so blind? How could I have not seen what was right in front of me?" That's why there is so much shame and stigma around being duped.

That's correct. I know there is shame and stigma, and that's why I wanted to write it. That was the point. It happens to everybody. It happens to men, it happens to women, and you know what, we're human.

Do you think it happens more now because of the Internet?

Because it's easier to get catfished?

Was writing the book cathartic?

How have you changed?

I think that I really, really trust my gut. I have a good gut, and I pretty much trusted it. But I realized that when I don't, bad things happen. I'm not talking just romantically. I'm talking about work-wise; I'm talking about in a whole array of arenas. I'm not really interested in dating anybody at the moment. I haven't met anyone I'd like. But I move slower.

Did you ever read "The Gift of Fear"? It's particularly about women protecting themselves from crime, but the whole point of it is, trust your gut. And if you feel, "Hmm, something's wrong," just start running. Because women are told, "You're being paranoid. You're overreacting." That then makes us more vulnerable.

So as somewhat of an expert on this subject, tell me what would be a red flag that would make you think, "this person might be a duper"?

Well, it's the casual lying. It's when you tell me that things are spectacular. I'm a big fan of white lies. But it's when you're exuberant and exalting about this food, this outfit, that's when we say there's something wrong here. This is not normal behavior.

Another red flag is when someone is moving quickly. If you watch "Dirty John" or listen to it, they got married in two months. That's quick. There's a reason that they want to rush into things and there's a reason that they probably don't want you to know about it. If they're moving quickly, it's so hard, because you don't know if it's not just because we really click and we're fabulous and it's a great relationship.

Just err on the side of caution always, which is almost impossible when your hormones are kicking in. The other thing I think is that, you really have to listen to yourself.

I would also add to that the gaslighting. When something happens and then they read it back to you in a way that you know isn't right.

Going on the offense like Lance Armstrong did every time. Every time someone was questioning him, he was all over that, and that's how he wanted it.

It also gets back to a really important point, which is that sense that in some way the dupers seem to believe it. On some level, there is a part of them that can lie effectively enough that they can turn off that part of him that knows it's a lie.

Absolutely. That's why whether polygraphs work or not, you could pass one if you believe your lies. I think a lot of them do believe their lies. It feels seriously delusional. That's what's so scary. I think my guy believed his lies, 100 percent.

And you can't debate that. You can't fight somebody who is living in a completely different reality.

You can't. You just got to get as far away from them as possible.