A first season that fought for its feminism yields a peacetime that explores its possibilities, given the space 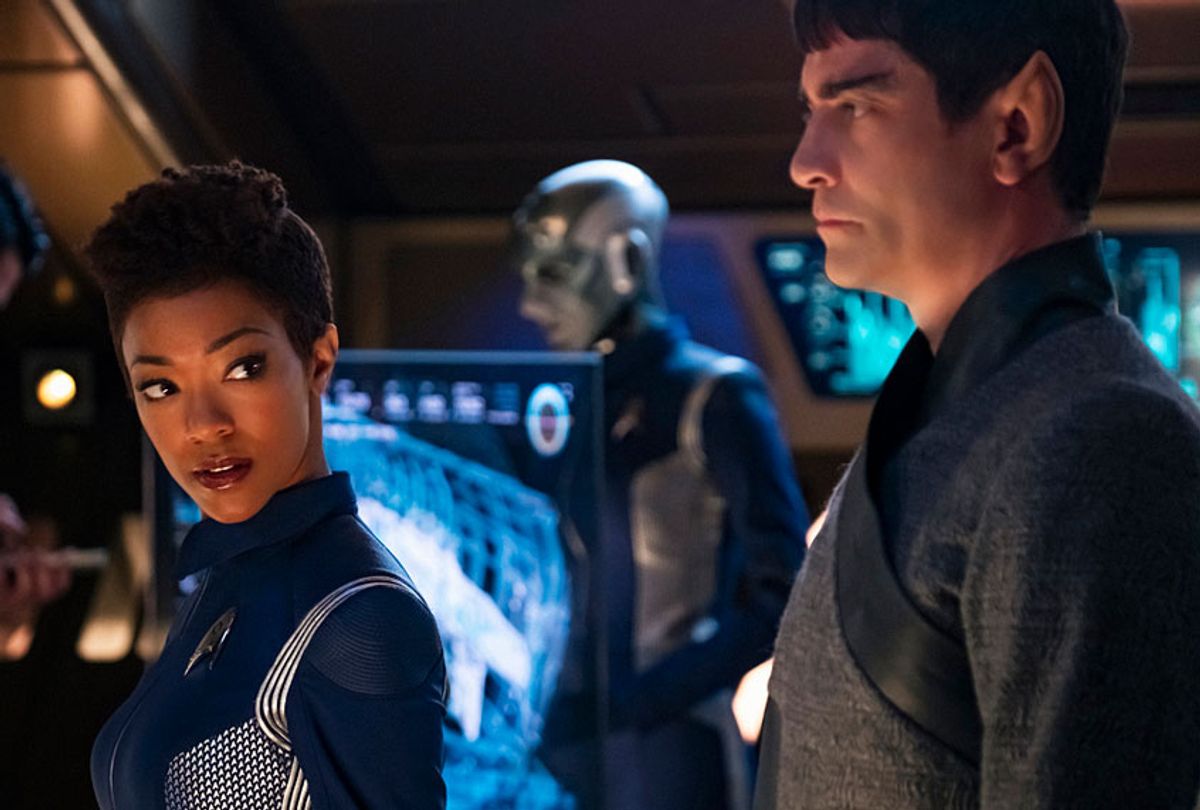 “You will know fear,” Michael Burnham says by way of quoting an allegory, “because it speaks very fast and it speaks very loud. If that is how fear acts, recognizing it is easy.”

Burnham lives this wisdom in the closing moments of the “Star Trek: Discovery” series premiere and speaks from a place of knowing its truth, and learning from it in the first season finale. By then the audience has seen Burnham’s many faces, a transformation that the actress who plays her, Sonequa Martin-Green, rides confidently.

Burnham, initially a first officer and mutineer soon after, is a warrior and survivor, the embodiment of bravery fueled by deep rooted memory, honor and fear.

She’s changeable too, a very different personality in the new season than we met in the first episode, where she presented as human with a Vulcan compass so devoted to logic that she betrays her captain Philippa Georgiou (Michelle Yeoh) to commit an aggression she believes to be right.

By the season finale, fear and betrayal visited upon her many times — by respected allies, by a lover and friend, by the captain who gave her a second chance where nobody else would, by the vagaries visited upon her during time spent in a dark mirror universe. Her principles hold true throughout because they are the principles of the federation.

Once I know fear, Burnham asks — again, quoting the story — how do I defeat it? The answer is to refuse it. To say no. Here, in these new episodes, Burnham has earned the restoration of her officer status, along with the determination to say yes.

“Star Trek: Discovery,” which launched its second season last week on CBS All Access, landed on a platform dominated by fans eager to see a new vision of the universe, one not traveled already by Captains Kirk, Sisco, Picard or Janeway. And Bryan Fuller, who determined the series blueprint before exiting the production, provides that vision in the form of a story told from the point of view of a Starfleet voyager who doesn’t occupy the captain’s chair.

The result in the first season was one long “Vulcan hello,” an explosive offense that shakes up a universe built on principles of exploration, non-interference and peace-keeping — Gene Roddenberry's vision of mankind’s positive evolution.

“Discovery” is a story birthed a decade prior to the events of the original series, and Burnham is a product of a universe that exists under a totalitarian threat. But she and Georgiou, her leader and mother figure, as well as cadet Sylvia Tilly (Mary Wiseman), also came to represent a feminist view of this universe somewhat singular to the Trek universe, and genre TV entertainment in general.

Perhaps the audience will more fully appreciate this in the new season with executive producer Alex Kurtzman taking the reins as showrunner. Kurtzman co-wrote 2009’s “Star Trek” movie as well as “Star Trek Into Darkness,” and immediately links the USS Discovery’s lore with the more familiar chronicles of the USS Enterprise: Anson Mount joins the story as Christopher Pike, who captained the Enterprise prior to Kirk. Additionally, a core driver of the season involves Burnham's yearning to connect with her foster brother Spock.

But I wonder if these character’s appearances in this first episode say less about this season’s underlying directive than the smug comportment of his science officer, a know-it-all who even in these evolved, progressive times refuses to believe a woman (let alone a black woman) might be more skilled than he is. The series handles that character’s bluster with plenty of humor and a predictable outcome that nevertheless merits a chuckle. Still, the hail was made and received — disrespect on the basis of gender is not tolerated.

Every era of the “Star Trek” catalogue revolves around progressive ideals, visible in the peaceful cohabitation and respect for the variant traits and abilities of the scores of races and worlds that comprise the United Federation of Planets. The best also respond to the real-world timelines in which they exist. Season 1’s Klingons, obsessed with maintaining purity and dominating other worlds, were written to resemble a certain strain of political zealot.

The first episode of this new season tasks Burnham with making calculations Captain Pike is hesitant to make, puts Tilly in a position to inherit the ship’s main science officer duties and, hello, introduces Tig Notaro playing an engineer who proves herself to be an adept medic and a technologically brilliant survivalist.

Instead of taking lives, they’re saving them and perhaps in the process, adapting a familiar course in this universe. They’re steering the way, and as central and essential to the journey as the person in the main chair.

That, along with the injection of levity and the introduction of other familial relationships, make me optimistic about where these new episodes are headed.

After season 1, we need a change in tone. I enjoyed the first season of this series, but if late 2017 and 2018 needed a dose of woman-boosting positivity, “Discovery” didn’t initially provide it. First season Burnham, a convict, is only as free as Discovery’s Captain Gabriel Lorca (Jason Isaacs) permits her to be. Only when the ship is flung into an alternate universe does the story truly place a stress test on common definitions of female power and humanity, as Burnham once again comes face to face with Philippa, who was murdered by Klingons in her universe.

The dark universe’s Philippa is a cruel, murderous leader who prizes ruthlessness and strength above all else, traits that bleed out across the universe. (This, in turn, contradicts the common but very wrong assumption that if women ruled the world, it would be a utopia. That’s only true if the right women ruled the world; we could just as easily get a cruel empress who scorches planets and dines on the flesh of her enemies.)

And yet Burnham is still able to connect to some level of mercy and love within her, which she exploits after the pair return to the Federation’s timeline to save their planets from being destroyed by the Klingons.

In this sense the first season played multiple cards, both placating the audience with a reminder of what’s best about humanity, while testing its propensity for violence playing a central role in a serialized Trek narrative. Besides the usual incel complaints about ladies ruining the club, other fans critiqued the emphasis on violence and explosions, a contrast to the approach of previous series.

But it’s also a season that takes an autocratic vision to two different and natural ends: In the first half of the season, the Federation is forced to abandon its devoting to exploration to be on war footing, compromising its principles left and right.

The second half shows the worst of what could happen when humans, centralized as the heroes of this universe, twist their will to survive until they take on their kind’s evilest tendencies, empowered by inflicting pain on others and emboldened by subjugating all they deem to be lesser than they.

Desperation, in other words, forged the path of Discovery in those days, necessitating action, and this can be draining at a certain point.

From what can be gleaned from the second season’s opening hour, though, Burnham is a guide, not a pawn, a figure who commands the same respect as the Captain, even more so at times. Tilly is bright, confident and embraces her intelligence wholeheartedly. Through their efforts “Star Trek: Discovery” appears to be rejoining the explorer’s path — a gentler one, maybe, but no less invigorating and perhaps a bit freer from fear.

Just in case the darker side is more appealing to viewers, however, CBS All Access is developing a spinoff for Michelle Yeoh’s character who, as a reminder, is the cold-hearted version of Philippa. If it goes forward, she’ll play a member of Starfleet's Section 31, basically making her black ops specialist within the Federation.

Who knows what Roddenberry would think of such a story? No matter; in 2019 realists would say that while utopias are wonderful, someone's getting their hands dirty to maintain the splendor of paradise.