Why the "Glass" prequel "Unbreakable" holds up, nearly 20 years later

"Unbreakable" wasn't just M. Night Shyamalan's best movie, it was far ahead of its time 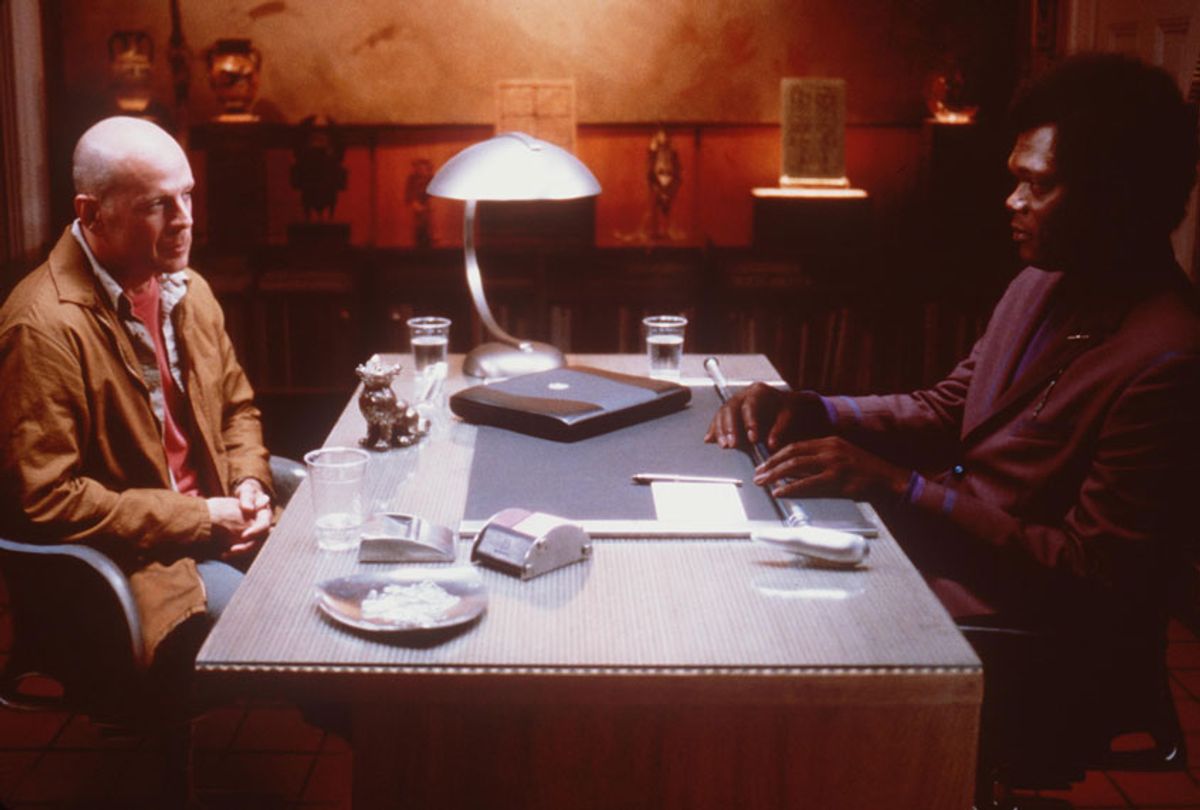 "Glass" may not have done well with critics (myself excluded), but it was a box office smash, netting roughly $47 million and distinguishing itself with the third-highest box office haul ever for the Martin Luther King Jr. holiday weekend.  Part of this was no doubt due to the star power of Samuel L. Jackson, Bruce Willis and James McAvoy, as well as whatever lingering luster director M. Night Shyamalan still possesses. That said, I suspect another factor helped as well: The quality of its prequel, Shyamalan's 2000 cult classic "Unbreakable," which both predicted the superhero boom that has overtaken popular cinema in the early 21st century and offered insightful commentary on it.

There are many other factors that "Unbreakable" has working for it. These include all of the Shyamalan hallmarks when he is in top form (which, regrettably, is only the case sporadically): Careful pacing, beautiful imagery, spiritual/existential dialogue, a brilliant twist ending. Yet "Unbreakable" also has a deeper idea at its core. While Shyamalan's previous film, 1999's "The Sixth Sense," is more iconic and had the more famous twist ending, "Unbreakable" actually did more than any other movie in his oeuvre to capture the zeitgeist of our time.

Spoiler alert (with the caveat that the spoilers for "Unbreakable" form the premise for "Glass"): For most of the running time, we see Elijah Price (Samuel L. Jackson) as an eccentric but benign mentor to David Dunn (Bruce Willis), a security guard who is invulnerable to illness or injury because he has the real-world equivalent of superpowers. Once Dunn accepts Price's theory and starts saving lives, however, he learns that Price has actually been responsible for hundreds of deaths due to terrorist acts that he perpetrated in order to learn whether a man like Dunn actually exists. This makes Price, the genius with a rare disease that causes his bones to be as brittle as glass, a real-world supervillain to Dunn's heroic counterpart. As he puts it:

In a comic, you know how you can tell who the arch-villain's going to be? He's the exact opposite of the hero. And most times they're friends, like you and me! I should've known way back when. You know why, David? Because of the kids. They called me Mr Glass.

There is only one reason why this ending is so effective: The film that precedes it is a poignant, intriguing exploration of the human condition and why people need to create superheroes in the first place. When we first meet Dunn, he is a glowering brute, the type of man who doesn't seem emotionally invested in much of anything. After the train he is riding to New York City crashes and kills everyone else on it, but doesn't leave a scratch on him, his survival comes across as not so much fateful or divine but cruelly arbitrary — there were good people on that train, even children, but the only person who gets to live is this random philandering meathead?

Yet when Dunn meets Price — who we first see as a newborn whose bones were broken shortly after being delivered — he is enthralled by Price's intensity and intelligence, and so are we. Price believes that Dunn's survival means he is a superhero like the kind depicted in comic books, which he argues exaggerate a more grounded but still profound reality. If there are people who are uniquely weak and vulnerable, then logically that suggests there are also people who are uniquely strong and invulnerable. Ergo, if Dunn is a superhero, then there is meaning to Price's suffering, and if Price can convince Dunn to become a bona fide hero rather than a diffident security guard, both men will have elevated their lives into something great amidst the suffering that surrounds them.

There is a poignancy to Price's desperate need for superheroes to be real, one that is remarkably prescient in light of the glut of monstrously successful superhero flicks that hit theaters in the past two decades: the "X-Men" universe (2000-present), Sam Raimi's hit "Spider-Man" trilogy (2002-2007), Christopher Nolan's "The Dark Knight" trilogy (2005-2012), the Marvel Cinematic Universe (2008-present), the DC Extended Universe (2013-present). While Price's osteogenesis imperfecta is a rare disease, one doesn't have to spend your life under the throes of an uncommon ailment to crave a belief in heroes. Yes, superheroes bring with them high concepts and flashy spectacle, but they also allow us to believe that life contains more than pointless chaos. If there are people out there with special gifts, and they can use those gifts for the betterment of humanity, then there can be a context to life's cruelty which makes it more bearable. Since a person has yet to be born who hasn't suffered — whether physically or psychologically — this idea is a compelling and persuasive one.

Willis, Robin Wright (as his wife) and Spencer Treat Clark (as his son) also deserve a tremendous amount of credit for their performances in this film, which would have failed had its stars not been able to endow earnest sincerity to characters and a concept that could have been drowned in ponderousness or dismissed as ridiculous. Jackson is a particular standout, though, both because Price provides the film with its soul and because we know what happened to his career after this movie. Jackson, after all, plays Col. Nick Fury in the Marvel Cinematic Universe, a character who has made large and small appearances alike in eight movies, a television series and at least two upcoming films. In fact, Price's philosophy about superheroes could have been taken directly out of one of Fury's monologues from "The Avengers":

The idea was to bring together a group of of remarkable people to see if they could become something more. To see if they could work together when we needed them to, to fight the battles that we never could. Phil Coulson died, still believing in that idea. In heroes. Well, it's a good old-fashioned notion.

It is worth noting here that, while "Unbreakable" works quite well, its surprise sequel "Split" falls short because its premise is half as intelligent and exponentially more offensive. As I pointed out in my review of "Glass," although "Split" is a skillfully crafted horror film due to James McAvoy's central performance as The Horde/Kevin Wendell Crumb, its underlying concept is extraordinarily problematic. What "Unbreakable" tried to do with superheroes, "Split" aims to achieve with mental illness, and in the process it unintentionally reinforces the stereotype that people who are psychologically atypical — in this case with dissociative identity disorder — are abnormally prone to violence. While Shyamalan tries to tie this into his broader superhero theme by arguing that mental illnesses can serve as the next stage in human evolution (an odd theory coincidentally put forth by a very different recent film, 2018's "The Predator"), he never manages to rise above the lazy and dangerous assumptions that have helped create a stigma around mental illness.

The best thing about "Split" was the very last scene, which reveals that it was a surprise sequel to "Unbreakable." Of course, the fact that the high point of "Split" is that it gave us an opportunity to return to a different movie speaks volumes about its own quality, but that shouldn't obscure the overall importance of The Eastrail 177 Trilogy bookends. The main point is that "Unbreakable" and "Glass," in their subdued and grounded ways,  help explain how the colorful superhero movies which preceded and followed them are more than juvenile trifles. As Price put its when a visitor at his prestigious art gallery confronts a customer who wants to buy a comic book drawing for his young child:

Do you see any Teletubbies in here? Do you see a slender plastic tag clipped to my shirt with my name printed on it? Did you see a little Asian child with a blank expression on his face sitting outside on a mechanical helicopter that shakes when you put quarters in it? No? Well, that's what you see at a toy store. And you must think you're in a toy store, because you're here shopping for an infant named Jeb. Now one of us has made a gross error and wasted the other person's valuable time. This is an art gallery, my friend... and this is a piece of art!

Well before Heath Ledger in 2008's "The Dark Knight" was nominated for a Best Supporting Actor Oscar, or before 2017's "Wonder Woman" and 2018's "Black Panther" used the genre to break barriers, "Unbreakable" was making it clear that superhero stories can be legitimate works of art which do much more than entertain dumb masses with colorful costumes and high-concept plots. This is why "Unbreakable" is likely to stand the test of time as long as stories about superheroes — or heroes in general — are still sought by scared, suffering human beings.