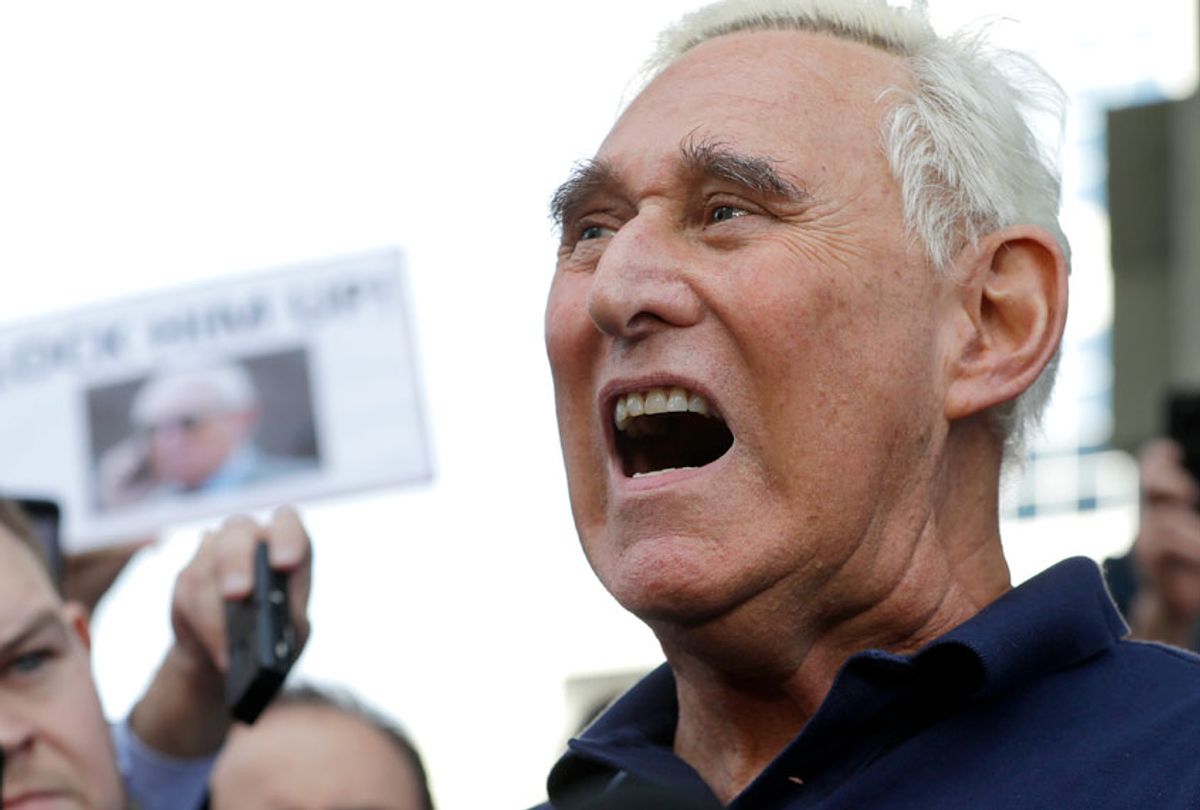 Stone was taken into custody after a team of law enforcement officials raided his house just after 6 a.m. ET in Fort Lauderdale, Florida. The raid came after a seven-count indictment brought by special counsel Robert Mueller as part of his investigation into Russian interference in the 2016 election and any alleged collusion or obstruction of justice by Trump, his campaign or administration.

Since then, Stone and several Republican lawmakers have criticized the FBI for using what they consider an excessive show of force. Stone, for his part, alleges "Gestapo tactics" were intended to "poison the jury pool," although some law enforcement experts have called it standard procedure.

Trump told the Daily Caller on Wednesday he would "think about" asking the FBI to review its use of force and cited concerns over the number of agents and types of vehicles on the scene.

"I thought it was very unusual," Trump said. "Roger is not a person that they would have to worry about from that standpoint, and I thought it was sad to see it. Very sad."

But Trump is not the only Republican who has requested answers.

"I am concerned about the manner in which the arrest was effectuated, especially the number of agents involved, the tactics employed, the timing of the arrest and whether the FBI released details of the arrest and the indictment to the press prior to providing this information to Mr. Stone's attorneys," Sen. Lindsey Graham, the Republican chairman of the Senate Judiciary Committee, wrote in a letter to Wray on Wednesday. Graham's committee has oversight of the FBI.

Rep. Doug Collins (R-Ga.), the top Republican on the House Judiciary Committee, sent a similar letter to Wray on Wednesday, asking for details on the manner of Stone's arrest.

"Many members of the committee are concerned the FBI used an excessive show of force to arrest an individual, who by his own admission does not even own a firearm and has no prior criminal record," Collins wrote in the letter. "Such a show of force may also unnecessarily place agents’ lives at risk by potentially heightening the risk factor for everybody involved."

Following the early morning arrest at his home and initial court appearance last week, Stone claimed to reporters gathered outside a federal courthouse in Florida that agents had "terrorized" his wife and dogs. "They could simply have contacted my attorneys, and I would have gladly surrendered voluntarily," Stone said.

Prosecutors wrote in court documents that alerting Stone in advance of an imminent indictment would risk "the defendant fleeing and destroying (or tampering with) evidence."

"While I firmly support law enforcement taking into account threats to officer safety, flight risk and the need to ensure evidence is preserved," Graham wrote, "I am leery that a subject of the special counsel’s investigation, who had retained counsel, had publicly stated that he believed that he would at some point be indicted and was apparently willing to surrender voluntarily, was arrested in a pre-dawn raid at his home."

"Although I am sure these tactics would be standard procedure for the arrest of a violent offender, I have questions regarding their necessity in this case," Graham continued. "The American public has had enough of the media circus that surrounds the special counsel's investigation. Yet, the manner of this arrest appears to have only added to the spectacle. Accordingly, I write to seek justification for the tactics used and the timing of the arrest of Mr. Stone."

As is required by law, the prosecutors will begin sharing the evidence against Stone that they collected with his legal defense team so he can prepare for a trial. Stone pleaded not guilty last week to seven counts of lying to Congress, obstruction of justice and witness tampering.
The evidence includes "multiple hard drives containing several terabytes of information consisting of, among other things, FBI case reports, search warrant applications and results (e.g., Apple iCloud accounts and email accounts), bank and financial records, and the contents of numerous physical devices (e.g., cellular phones, computers, and hard drives)."
The prosecutors say in the filing Thursday that the FBI seized electronic devices from Stone's home, apartment and office.