There is one place where both tales can be found: the 2018 fictional crime film "Sicario: Day of the Soldado" 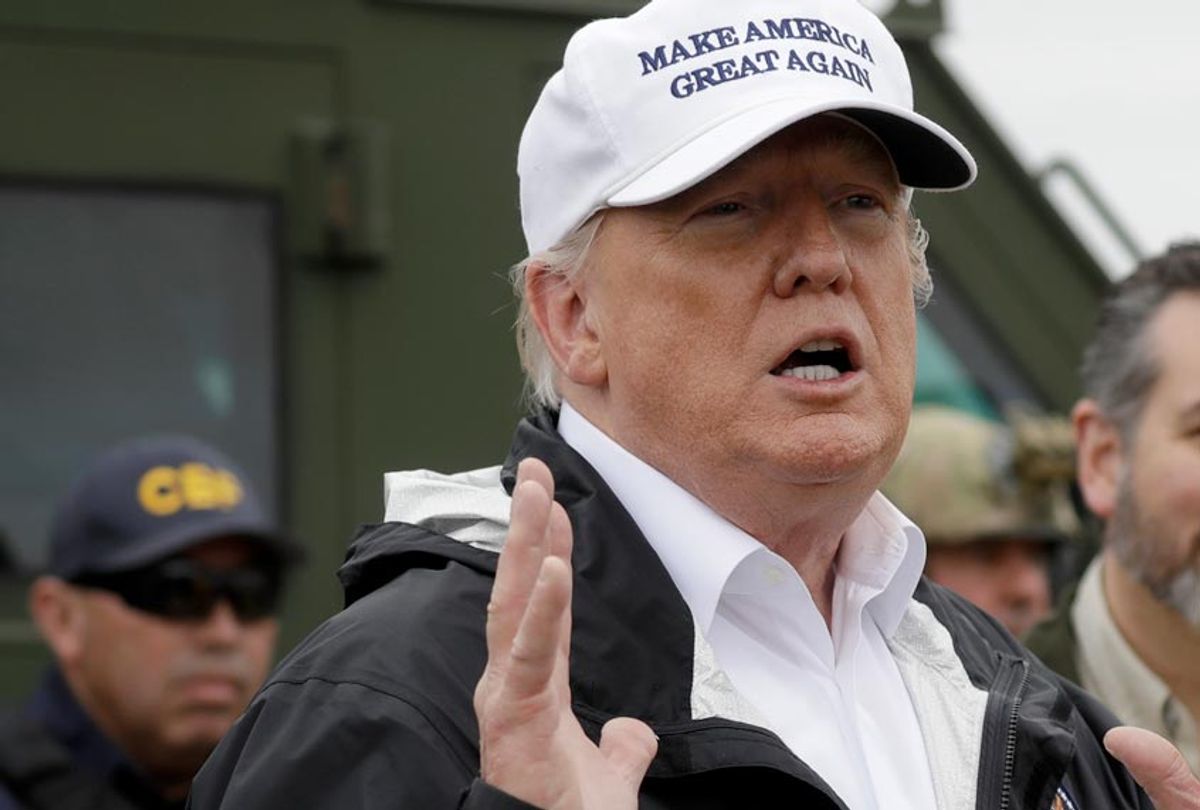 Donald Trump speaks as he tours the U.S. border with Mexico at the Rio Grande on the southern border, Thursday, Jan. 10, 2019, in McAllen, Texas. (AP/Evan Vucci)
--

President Donald Trump has repeatedly told vivid and, at times, disturbing anecdotes of criminal activity in an attempt to rally support for his long-promised $5.7 billion "wall" along the U.S.-Mexico border. Two in particular, involving women gagged with duct tape and prayer rugs, have generated so much attraction that administration officials have reportedly launched an urgent effort to find evidence to back up the president's rhetoric — yet, so far, no evidence has been found.

There has been no evidence to support Trump's claims that migrants are using prayer rugs at the border or that smugglers are using duct tape on women to traffic them, an administration official told ABC News on the condition of anonymity, because the person was not authorized to speak publicly. The introduction of Trump's taped women narrative corresponds with a marked change in tone by his administration on the urgency of constructing a border "wall" — a request that Democrats in Congress have refused to grant. The recent budget impasse over Trump's demands for $5.7 billion for his proposed wall led to the longest government shutdown in U.S. history.

Trump's most-recent retelling of the duct-tape story came Friday in the Rose Garden as he announced a temporary end to the partial government shutdown. He argued that Democrats needed to recognize the horrors at the border, again launching into the same dark narrative he has told more than ten times this month, according to an analysis by the Washington Post. Democrats, who seized control the House of Representatives in November during the 2018 midterm elections, have denounced his demand, calling the wall immoral, ineffective and costly. The Senate on Thursday rejected two measures to end the shutdown.

"Women are tied up. They're bound, duct tape put around their faces, around their mouths," Trump told reporters without offering any supporting evidence to back his claims. "In many cases, they can't even breathe. They're put in the backs of cars or vans or trucks."

Trump appears to have introduced the anecdote on Jan. 4 while speaking to reporters in the Rose Garden after a meeting with congressional lawmakers on border security, according the Post's analysis.

"One of the things that happens there is human traffickers — maybe that's the worst of all — where you'll have traffickers having three and four women with tape on their mouths and tied up, sitting in the back of a van or a car," Trump said at the time.

Trump has shared an article from the conservative publication Washington Examiner on Twitter, which quotes an anonymous rancher claiming multiple prayer rugs, commonly used during worship by Muslims, had been found by local farmers and ranchers. He appeared to be trying to falsely connect the rugs to his frequent claims that Islamic migrants were entering the U.S. through Mexico and could pose a terrorism threat, unless his wall is built.

Human trafficking experts and immigration advocates for women told the Washington Post earlier this month they had no evidence to support Trump's claim that traffickers tie up and silence women with tape before illegally bringing them into the U.S. in windowless vans. In fact, women being duct-taped, they said, was something they had ever heard of.

Shortly after the Post article was published, Vox published a memo written by a top official at the U.S. Border Patrol asking agents to quickly supply "any information" they had on claims that traffickers "tie up and silence women with tape" before illegally driving them to the U.S.

While it remains unclear where Trump is getting his information, several news outlets, including CNN and MSNBC, have noted there is one place where both prayer rugs at a border and duct-taped women put in cars to traffic across the border can be found: the 2018 fictional crime film "Sicario: Day of the Soldado," in which FBI agents fight Mexican drug cartels.