Super Bowl in the age of anxiety: Maroon 5's boring halftime show was a symptom, not the disease

Beset by controversy in the lead-up to the Big Game, Maroon 5 was the center of a Super Bowl we'll soon forget 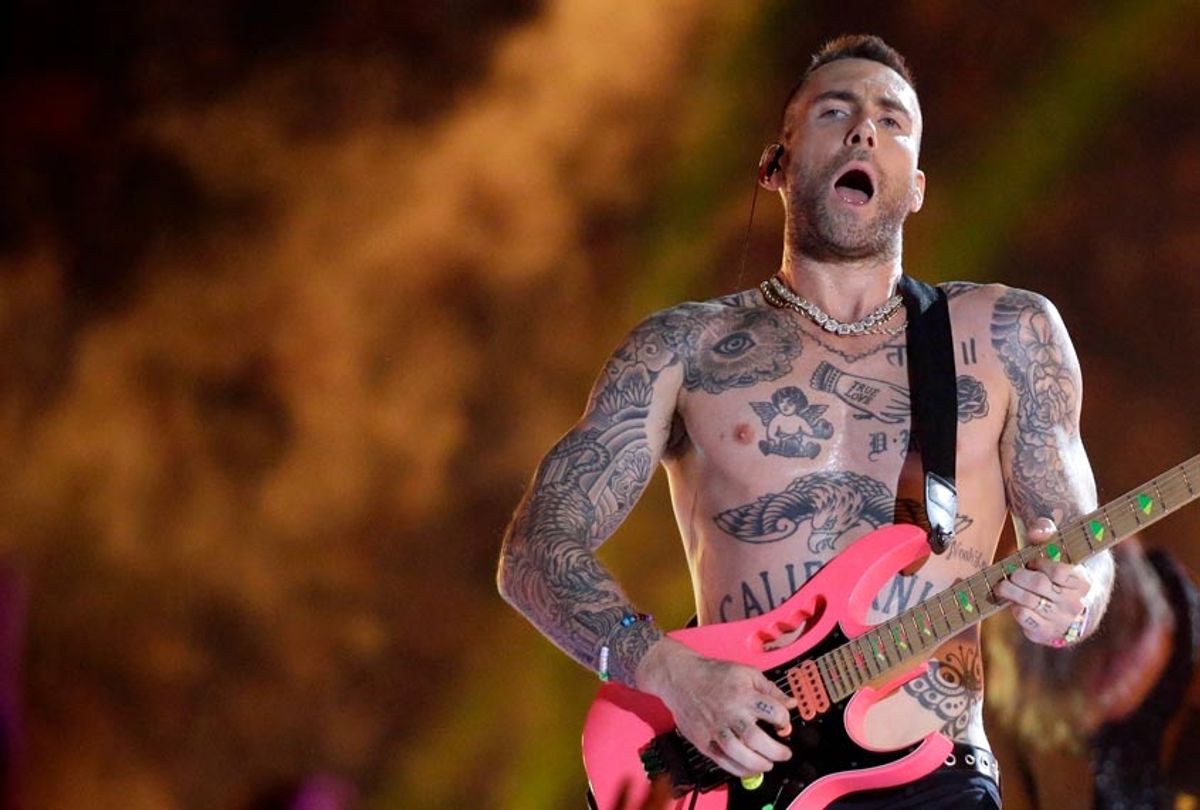 Adam Levine of Maroon 5 performs during halftime of the NFL Super Bowl 53 football game between the Los Angeles Rams and the New England Patriots Sunday, Feb. 3, 2019, in Atlanta. (AP/Mark Humphrey)
--

Fear is the enemy of great art. It can be a terrific motivator for performers, of course. Many masterpieces have been birthed in fearful times, no question. But when trepidation infects an event, especially one expected to be seen by somewhere in the area of 100 million viewers, the results tend to be bland.

When we look back at Sunday’s Big Game, which took place in Atlanta, those who remember the flavorless entertainment within and surrounding it may think of it as a product of an anxious age, generally, and an environment informed by social pressure. A low scoring game between the New England Patriots and the Los Angeles Rams didn’t help that energy; rather, it ensured that the audience wouldn’t have much at all to cheer for.

Add on an underwhelming halftime performance by Maroon 5, with a sprinkling of who knows what from hip hop artists Travis Scott and Big Boi — 50 percent of OutKast — and we saw what happens when performers who accept a tainted mission strive to please without provoking: nothing remarkable.

Indeed, it’s telling the most provocative performance of the evening was brought to us by an artist who has been dead for nearly 32 years, by way of a Burger King commercial. Much of Andy Warhol’s artwork is a once a celebration of and a commentary on packaging, consumerism and consumption.

The art is in the sale and the art itself is the sell. But he also celebrated the image of every day items that others would write off as banal; he saw beauty in curves on Coca-Cola bottles and the black lines on scarlet soup cans.

As such, the insertion of Warhol on film, deconstructing a Whopper and splatting a bit of ketchup on it, represents the height of event’s artistic effort. Those who know who the artist is may have wondered whether it was real or a brilliant visual effects recreation. It’s the former by the way, a 45-second snippet taken from "Andy Warhol Eating a Hamburger,” part of a longer segment featured in director Jørgen Leth’s 1982 film "66 Scenes from America."

The concept of that commercial was to create mystery, pique curiosity and ride the tension of blank space to spur interest. Maroon 5 might take a cue from that notion in hindsight. After all, who expects the sublime from fast food? It’s doubtful anyone thought Maroon 5 would match the levels of past Super Bowl Halftime performances by the likes of Beyoncé, Bruno Mars or even Katy Perry. But from what we saw on Sunday one has to wonder if they gave up before the first note was played.

Let’s be clear — this is not about the music itself, which unfurled with nary a note out of place, but the weakness of the spectacle.

With prominent members of the entertainment community declaring their loyalty to Colin Kaepernick, the professional football player who has become the face of silent protest against police brutality and shootings of unarmed African Americans, this year’s Super Bowl Halftime show became one of the least desirable gigs going.

Maroon 5 accepted the halftime performance act late in the planning process after the NFL and CBS were turned down by a number of performers, Pink and Rihanna reportedly among them, who declined the gig in light of the NFL’s policy requiring its players to stand during the national anthem (which, following the massive unpopularity among fans, it eventually stopped enforcing).

Engaging an act like this, a pop band whose music is ubiquitous enough to be recognized by the broadest swath of viewers, and whose front man is a prime time hero thanks to his judging gig on “The Voice,” was one of few viable solutions the NFL and the network could have employed.

Maroon 5 is a generically inoffensive kind of band whose passionate fans aren’t likely to turn against them for volunteering to be the topping on a political hot potato. The rest of us can go back to humming along with “She Will Be Loved” while trying on jeans in mall dressing rooms and perhaps confusing them for Coldplay, a previous Super Bowl halftime act that distinguished itself by boring America into a stupor.

Part of the frustration with Sunday’s show is due to the wan effort to dissipate pressure that encircled the performance portion long before they took the stage.

On Thursday Levine, speaking with Entertainment Tonight, assured the public that the spectacle would be in the music and, speaking of those who feel ignored by the band — such as the 115,000 people who signed a Change.org petition asking the performers to take a knee during the show — that “they will be heard.”

They were not. Instead the band dug deep into the stacks, performing “This Love” and “Harder to Breathe” off of 2002’s “Songs About Jane.” We got “Sugar” and “She Will Be Loved”; the audience also got “Girls Like You,” the band’s collaboration with Cardi B and “Moves Like Jagger,” which featured Christina Aguilera. Neither of those collaborators were present for the performance and, perhaps to distract from their absence, Levine removed articles of clothing until he was left shirtless, revealing that he has a tattoo that reads “CALIFORNIA” across his torso.

Despite this, and despite Levine’s vigorous attempts at wiggling and jumping around to the beat of what may be the whitest drumline in Atlanta, the real star of the show was the pyrotechnics team.

Scott, for his part, appeared to land on stage in a fireball, preluded by a nod to the late Spongebob Squarepants creator Stephen Hillenburg and clips teasing that perhaps the performance might at last include a tribute to the cartoon’s in-show Super Bowl song “Sweet Victory”; he did not, opting instead for perform a tune that has to be partially censored due to curse words.

Then Big Boi rolled in to run through the 2003 hit “The Way You Move,” noticeably without Andre 3000. Which was nice and nostalgic and, along with Scott and a very enthusiastic choir, ensured that the halftime buffet would have options besides a dull potato salad everyone politely enjoys at the tailgate but nobody wants to eat or be stuck taking home.

Devoid of controversy, these acts could have at least granted the audience pageantry.  Without that, or commercials distinct for breaking any conventions — although the Bud Light commercial that transformed into a “Game of Thrones” ad was an enjoyable lark — the Big Game and its non-sports diversion lacked edge or fire, never mind the staged flames.

Some might call it a nothing burger. But in the hands of more fearless artists, even that could be more palatable.