Donald Trump's State of the Union, battered and delayed: What should we expect?

Commentators hope Trump's big speech on Tuesday night will bring America together. Almost no one thinks he can 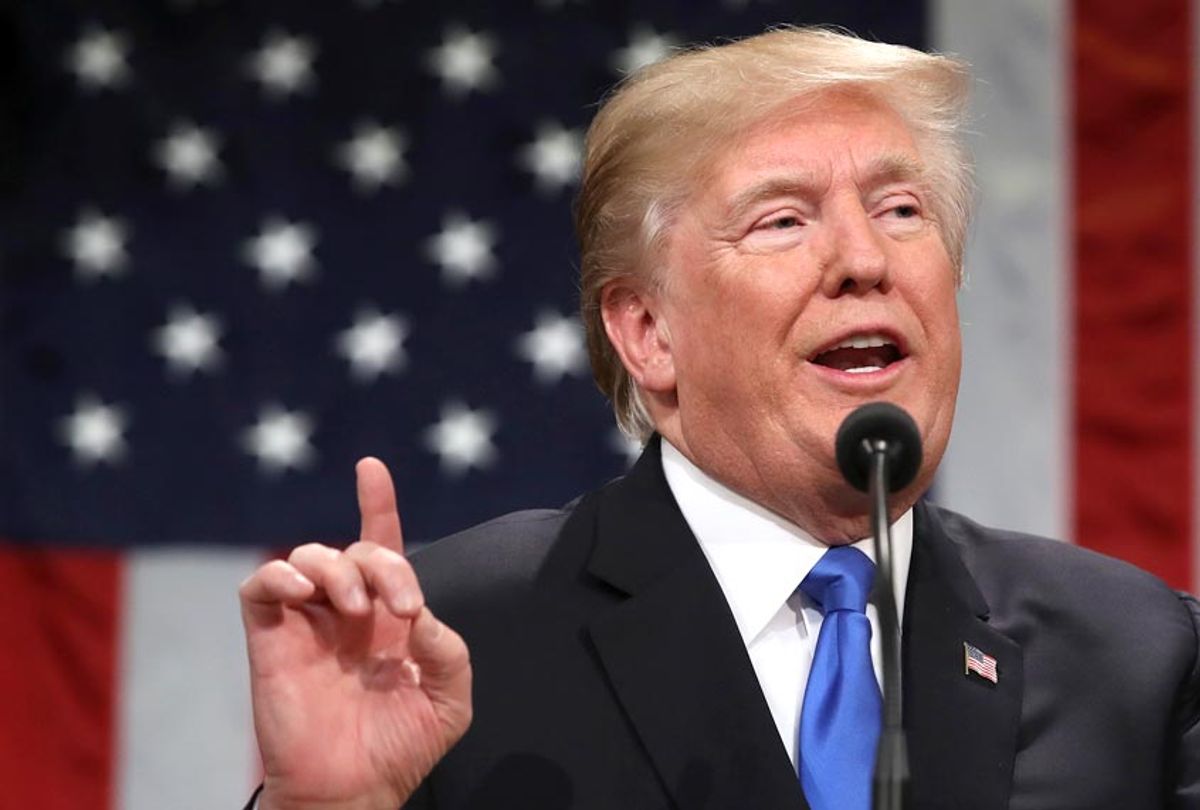 Donald Trump gestures during the State of the Union address in the chamber of the US House of Representatives in Washington, DC, on January 30, 2018. (Getty/Win McNamee)
--

Traditionally, a president's State of the Union message -- the annual address delivered to Congress, near the beginning of each year -- is meant to bring Americans together. Yet although President Trump's administration has offered an excerpt from Tuesday's State of the Union which could point to a conciliatory message, many other factors suggest that Trump's big speech will have a very different effect.

In one signature line from this year's address, according to CNN, Trump will tell the nation: "Together, we can break decades of political stalemate, we can bridge old divisions, heal old wounds, build new coalitions, forge new solutions, and unlock the extraordinary promise of America's future." That sounds like the sort of bipartisan boilerplate any other president might offer.

Yet when Trump was asked on Friday whether he might use the speech to declare executive action on his promised border wall — perpahs by declaring a national emergency, even though 66 percent of Americans would oppose such a move — he replied, "I don't want to say. But you'll hear the State of the Union and then you'll see what happens right after the State of the Union, OK?"

It doesn't help that Trump has been upping the ante on divisive rhetoric in the days leading up to the speech, as with this Sunday tweet:

With Caravans marching through Mexico and toward our Country, Republicans must be prepared to do whatever is necessary for STRONG Border Security. Dems do nothing. If there is no Wall, there is no Security. Human Trafficking, Drugs and Criminals of all dimensions - KEEP OUT!"

"If the goal of the State of the Union speech is bringing our country together, then the president should not focus on immigration as the main theme," Democratic political analyst Mary Anne Marsh wrote in an editorial published by Fox News. "The majority of Americans oppose a border wall and support immigration. But the president’s base – about one-third of the country – supports his position."

It has also been rumored that Trump will use his speech to announce a new summit meeting with North Korean leader Kim Jong-un, an apparent effort to restart an already-controversial bilateral relationship.

"There’s about to be another summit," former Secretary of State Madeleine Albright told Salon last week. "I do think that there have been some negotiations, or at least talks about it, at a lower level, but we’ll see where it goes. I think the hard part is, in terms of the next administration, I think it’s very hard to figure out what President Trump is promising. I hope he doesn’t do something like say, 'There will never be any exercises with our allies' or promise to withdraw our troops from South Korea ..."

If nothing else, Trump's State of the Union speech will be memorable for the fact that its delivery was delayed. That in and of itself was unprecedented. Other speeches have been given late because of emergencies or disasters — such as the Challenger explosion in 1986 -- but this was the first time that a SOTU has been delayed because the  House Speaker refused to invite the president to the Capitol. But Nancy Pelosi did just that during the recent government shutdown, saying it would be inappropriate for Trump to give the speech in that context.