Democratic women send Trump a message: We're coming for you

Led by Stacey Abrams and Nancy Pelosi, Democratic women stole the show at Trump's State of the Union 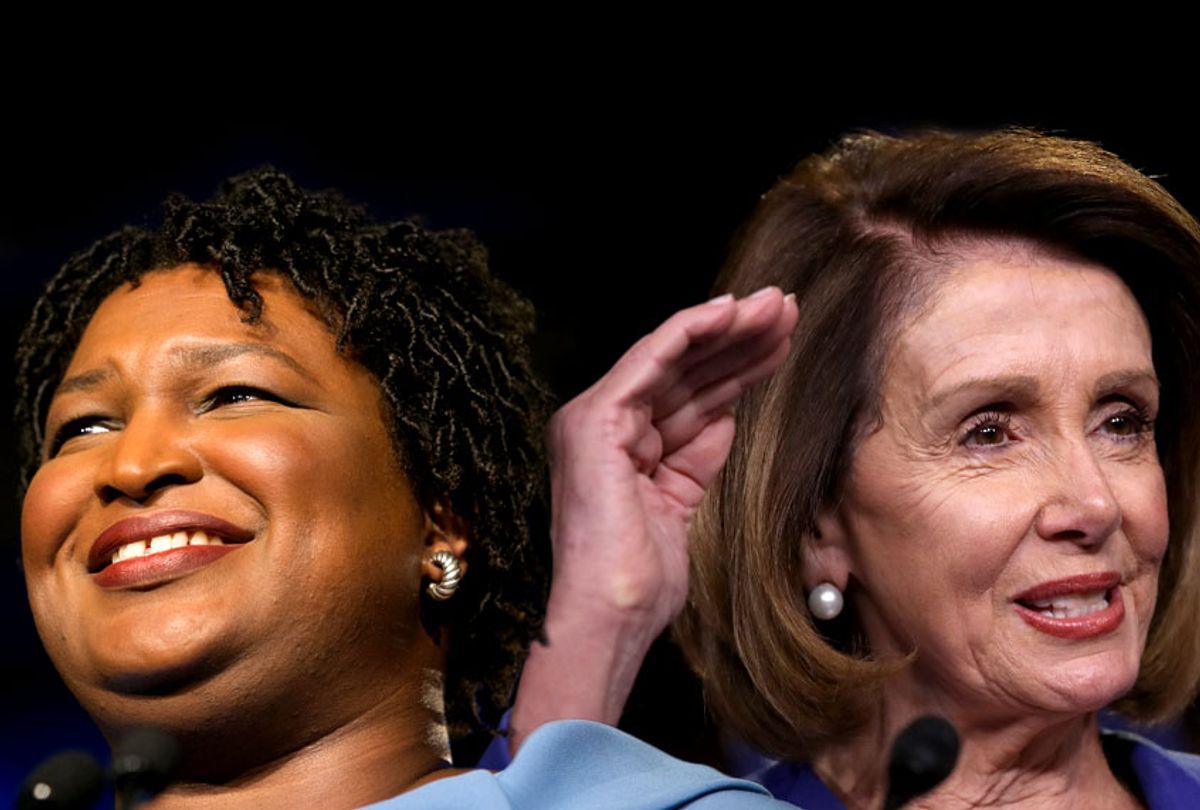 The most arresting image from the State of the Union address on Tuesday night was not any of the now-extremely-tedious photos of Donald Trump showing of his standard two facial expressions, smirking and gloating. Instead, the most compelling image — and video — was one of House Speaker Nancy Pelosi standing above Trump, her eyes locked directly with his, sarcastically clapping with her hands pointed directly at his face.

Pelosi was ostensibly clapping for something Trump had said, but her posture and expression were unmistakably condescending. The term "throwing shade" is often misused to mean any kind of insult, but this was a live example of what it actually is: Using an ostensibly positive reaction to make clear that you hold someone in contempt.

But Pelosi's wordless burn of the president was just one part of an extraordinary performance by Democratic women, who utterly and completely stole the show from the orange smirk in a suit. Trump was, as expected, boring and repetitious in his racist obsessions. But the Democratic women, clearly still riding high on a midterm election that saw a wave of women — overwhelmingly Democrats — winning office, were luminous.

The most important of these women was clearly Stacey Abrams, the former Georgia state legislator who nearly won the governor's race in that state last year, and very likely would have if her opponent, Brian Kemp, hadn't run a full-scale voter-suppression operation. Prior to her speech, Abrams received a lot of snarky responses from conservatives disingenuously wondering why a "loser" was delivering the official Democratic response. She turned out to be a genius choice. Most State of the Union responses fall flat, weighed down by the stifling format of a person speaking directly into the camera without a crowd to buoy them up. Abrams, however, felt not just human in that format, but powerful.

American families' "hopes are being crushed by Republican leadership that ignores real life or just doesn’t understand it," Abrams said, characterizing the government shutdown — which Trump never directly mentioned in his own speech — as "a stunt, engineered by the president of the United States".

The speech was of course well received by liberal pundits like MSNBC's Chris Hayes, who tweeted that Abrams gave "a good, warm, strong, substantive speech." But even some conservatives understood pundits that Abrams had upstaged Trump.

“I got to say, Stacey Abrams, I think she did have presence tonight," Laura Ingraham said on Fox News after the speech, noting that it's "never easy to do these speeches."

Even in the House chamber, without microphones, the Democratic women were able to upstage Trump. As they did in 2017, a large proportion of Democratic women wore white and sat together. With their increased numbers in the new Congress, that created an arresting visual representation of the vast divide between Republican members, who are predominantly white men, and the much more diverse Democratic caucus.

That choice helped fuel the most memorable moment of the night, which didn't belong to Trump at all, but the Democratic women. During the middle of his speech, Trump claimed support for women working and women in leadership, not out of any real conviction but to create an "I'm not a sexist" moment before launching into his attack on abortion rights.

Democratic women stole the moment from him. When he spoke about the rise of female participation in the workforce and the growing number of women in Congress, the ladies in white stood up and, turning to each other — the people who actually made this happen — applauded and celebrated themselves. Trump was clearly trying to claim credit, and they didn't let it happen.

"You weren't supposed to do that," Trump complained, in a moment that made clear who, exactly, were the real champions of American women in the room.

Watching women cheer for themselves was fun, but it was equally fun to watch women disdain the chauvinist pig in the White House. Twitter exploded with competing gifs of reaction shots to Trump's ridiculous speech from Democratic women in the audience, including two who hope to occupy his office two years from now.

“It will take days to fact-check all the misrepresentations that the President made tonight," Pelosi said in a statement after the speech was over, summarizing the general tone of disdain from Democratic women.

There was plenty of predictable whining from conservative commentators about how these Democratic women were being disrespectful to the president and his office. This, of course, was in defense of a man who has been  heard on tape bragging that "when you're a star," you get to "grab them by the pussy" and women have "to let you do it."

Donald Trump got more respect from women than he deserved. Democratic women could have pelted him with rotten vegetables, and still have shown him more respect than he shows women.

In Trump's hands, the State of the Union address has become a miserable affair, in which a petty and vindictive racist is unduly elevated by the pomp of an office he never would have won in a truly democratic system. This year, at least, women who hold power were able to harness this event and reverse its energy, delivering an unmistakable message to Trump and his allies: The women are coming for you.

Women are the backbone of the resistance to Trump's presidency, and have been since the Women's March was organized. As Tuesday night made clear, they are also increasingly the face of the resistance, the leaders who are speaking out most forcefully and effectively. With at least three prominent women running in the Democratic primary campaign (and more likely to follow), it's entirely plausible, and even likely, that a woman will finally unseat him in November of next year.

No wonder Nancy Pelosi was clapping.