All four major female Democratic nominees are swiftly being framed as "inauthentic." Just a coincidence, right? 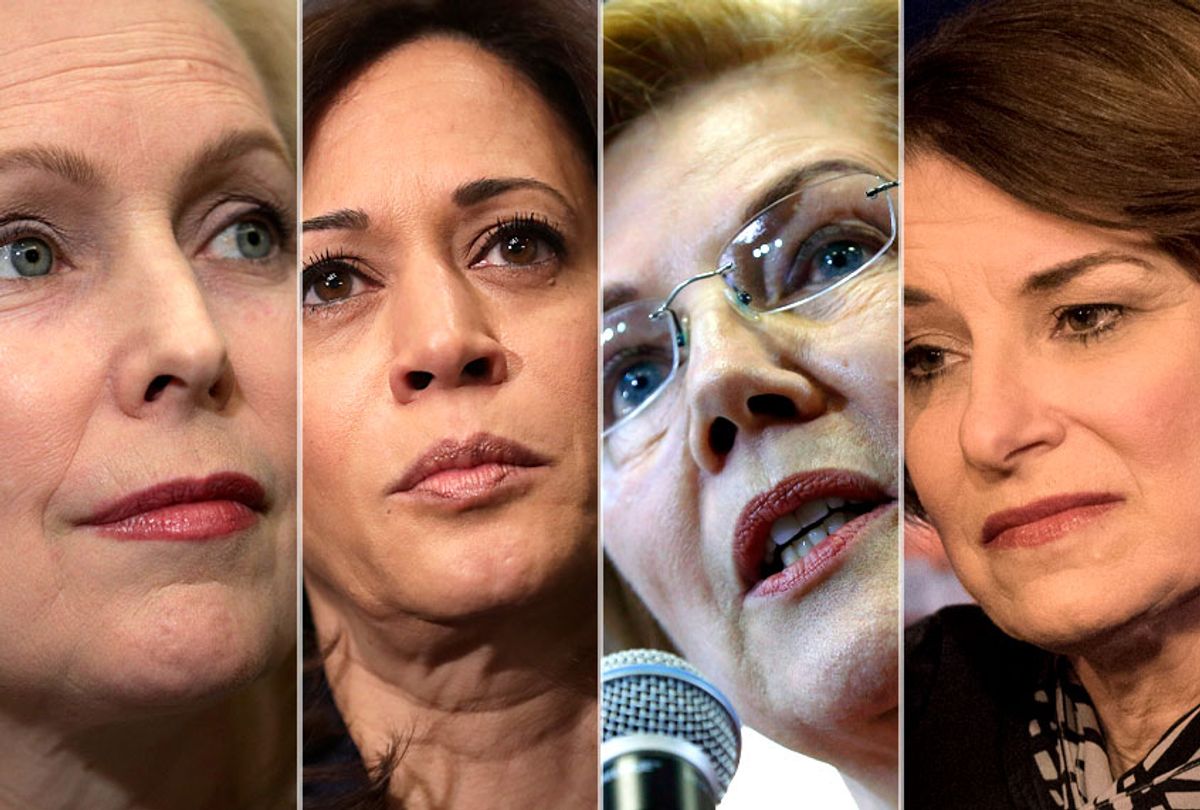 In what we are no doubt expected to believe is a remarkable coincidence, it turns out that none of the major female contenders for the 2020 Democratic presidential nomination are "authentic." The election is more than 600 days away, but so far all four female senators who are running — Kirsten Gillibrand, Elizabeth Warren, Amy Klobuchar and Kamala Harris — have been hammered with irrelevant stories meant to illustrate what phonies they are.

Unsurprisingly, Warren — whose agenda presents the clearest threat to the wealthy interests that control American politics and media — has gotten it the worst, bombarded with "questions" about her younger days, when her family's oral history led her to identify, in situations that didn't impact her career, as Native American. A thorough investigation by the Boston Globe last year made clear that those who had influence over Warren's career advancement always perceived her as white. More to the point, it's preposterous to imagine that being perceived as a woman of color would somehow be an advantage — especially in the 1980s. Yet this story keeps getting injected into the news cycle again and again.

Why is this happening. It clearly goes back to this hazy and ridiculous concept of "authenticity." Leaving aside legitimate leftist concerns about appropriation, the grim reality is that Warren's porous ethnic identity in her younger days has media traction mainly because it gives her opponents an opportunity to paint her as a faker, while also perpetuating the right-wing myth that people of color are somehow privileged over white people.

If these attacks on Warren were happening in isolation, that would be one thing. But now all the other major female candidates are also getting saddled with this narrative of inauthenticity.

This week, Harris is being attacked because she supposedly said during a radio interview, that she listened to Snoop Dogg and Tupac Shakur when she was in college, even though they released their first albums several years after she graduated from law school. (Those who bother to watch the tape will see that Harris was actually answering a question about what music she likes in general.)

Over the weekend, New York Times reporters Frank Rich and Jonathan Martin hit Gillibrand with the "inauthenticity" implication, mocking her for politely asking her dinner mates whether they preferred to eat fried chicken on a campaign stop in South Carolina. I'd like these men to know that I grew up in Texas and haven't eaten fried chicken since at least the early '90s -- not because I'm "inauthentic," but because women, in order to meet the narrow and fickle standards demanded of us, are expected to avoid fattening or messy foods.

And Amy Klobuchar is now in the midst of a media whirlwind after a Politico story painting her as a tyrannical boss whose incessant demands have led to massive staff turnover. Again, the central obsession of "authenticity" is fueling the story, as Klobuchar's public brand is a Midwestern niceness, which these reports of personal cruelty seem to undercut.

There are also men likely or certainly running for the Democratic nomination, but none have (yet) become the center of obsessive, viral stories supposedly showing what poseurs they are. This is not a coincidence. "Authenticity" is a trap set up for a lot of politicians, particularly Democrats, but female politicians are especially vulnerable to claims that they are somehow faking it.

That's because, despite many protestations to the contrary, there's still a widespread sense in the male-dominated media that a woman who seeks power is somehow an unnatural being. The "inauthentic" narrative becomes a socially acceptable way to perpetuate the deeper belief that women, as a category, do not belong in leadership roles — and especially not in the presidential role that has always been occupied by men.

The only way, ultimately, for a woman to be "authentic" is for her to step out of the spotlight and dedicate herself to being the support staff for the ambitions of the only authentic leaders: Men.

The 2016 election would read like a satire of this situation, if it hadn't been so very, very real. Donald Trump, a man who lies more than he tells the truth, was widely perceived as the "authentic" candidate, supposedly in touch with the common man, even though he literally grew up in the cradle of wealth and doesn't seem to understand basic things like how grocery stores work. Hillary Clinton, the most truthful candidate in the 2016 election cycle, was viewed as shady, dishonest and inauthentic — largely due to media coverage that portrayed her that way by harping on perfectly normal behavior, such as pretending to feel well when you really don't.

The authenticity policing of Clinton got so out of control that there was literally a hubbub over comments she made on a radio show — the same one, as it happens, on which Harris discussed Snoop and 2Pac — about how she carried hot sauce in her handbag. This was immediately perceived as pandering, as if it were impossible to imagine that a professional politician who has to eat a lot of bland hotel food might not have figured out this trick a long time ago. And the "questions" persisted, even though Clinton's love of hot sauce has literally been documented for decades.

Right-wingers have figured out that one way to undermine any female politician is to attack her as inauthentic. That's why the election of Rep. Alexandria Ocasio-Cortez to Congress has resulted in a cascade of accusations that she is somehow not who she says she is, from attacks on her for using the nickname "Sandy" as a teen to obsessively chronicling her clothing choices and even her childhood home for signs of phoniness.

None of this has stuck yet, but that could be because Ocasio-Cortez is a freshman congressman who hasn't garnered enough power to threaten the egos of the men who run the mainstream media. If she ran for president, however, there's a not-small chance that her childhood nickname would become an endless source of "questions" in headlines at outlets like Politico, or the subject of tweets from New York Times reporters.

To be sure, male politicians sometimes get painted as out-of-touch elitists. In some cases, that's just because they are — think Mitt Romney, who got this reputation not because of his clothing choices or eating habits, but because he literally told rich donors that half of all Americans are lazy parasites.

In most cases, however, the "inauthenticity" charge is part of the right-wing process of feminizing male Democrats, as was done to Al Gore in 2000 and John Kerry in 2004, who both saw the mainstream media turn everything from their clothes to their love of sports into evidence that they were inauthentic and somehow girly.

It's no accident that these charges of inauthenticity are intertwined with ideas about femininity, of course. That's the whole point of feeding these "inauthenticity" narratives about male candidates into the gullible mainstream media cycle — to make them seem less manly and therefore less natural in a leadership role.

This is also why it's unwise to believe that the sexist authenticity trap can be avoided in 2020 by nominating a man instead of a woman. Yes, the male candidates are getting a pass on the authenticity test. (Although not for long: Rep. Liz Cheney just mocked Cory Booker on TV for being a vegan.) But if a man ends up as the Democratic nominee, the right-wing noise machine will swiftly start feeding the mainstream media stories designed to make him look like a fraud and a girly-man. The current media eagerness to push stories about fried chicken and hip-hop records suggests they'll be delighted to play along when it's a man's turn to be demonized this way.

The case of Amy Klobuchar definitely complicates the issue. While the authenticity attacks on Warren, Harris, and Gillibrand are all varying degrees of irrelevant and sexist BS, but there's good reason to believe the stories about Klobuchar being a bad boss are both true and relevant. It matters whether a president can handle staff management issues, after all, and it would have been nice if the media had cared half as much in the past when male politicians faced similar complaints.

Unfortunately, the Klobuchar story is a classic "boy who cried wolf" situation. Reporters who worked on this story and their colleagues may be frustrated to see so many readers dismiss the Klobuchar story as sexism, but can anyone blame people for seeing it that way? After years of stories that unfairly characterized female Democrats as liars and ballbusters, it makes sense that many women now believe the mainstream media has no credibility when it comes to covering female politicians.

Arguably, this public skepticism might help salvage this terrible situation. Clinton got nearly 3 million more votes than Trump, despite the fact that her media coverage was ridiculously unfair. Especially in light of his epic and very real corruption, Trump was barely vetted at all. Sexist media coverage could well have cost Clinton an electoral victory by chipping off a few thousand votes in a handful of districts that tipped the balance. But it also created a growing awareness of how serious the problem is. That could mean that even more voters see through the sexist attacks on candidates next time around — and make better decisions for it.

Still, the mainstream media shouldn't depend on the public holding them in contempt to save our democracy. Instead, it's time to simply cease with the sexist coverage. Stop trying to "test" candidates for authenticity by policing their clothes, their hobbies and the way they eat fried chicken. Stop uncritically elevating right-wing attacks on Democratic politicians that are based in nonsense.

This time around, mainstream journalists should try shaping coverage around important matters, such as the policies candidates support and the likelihood that they'll be able to pass them. That way, we won't have to face another election where a  wealthy, sexist and endlessly corrupt liar wins the presidency because he was better at gaming the media's bizarre understanding of what constitutes authenticity.