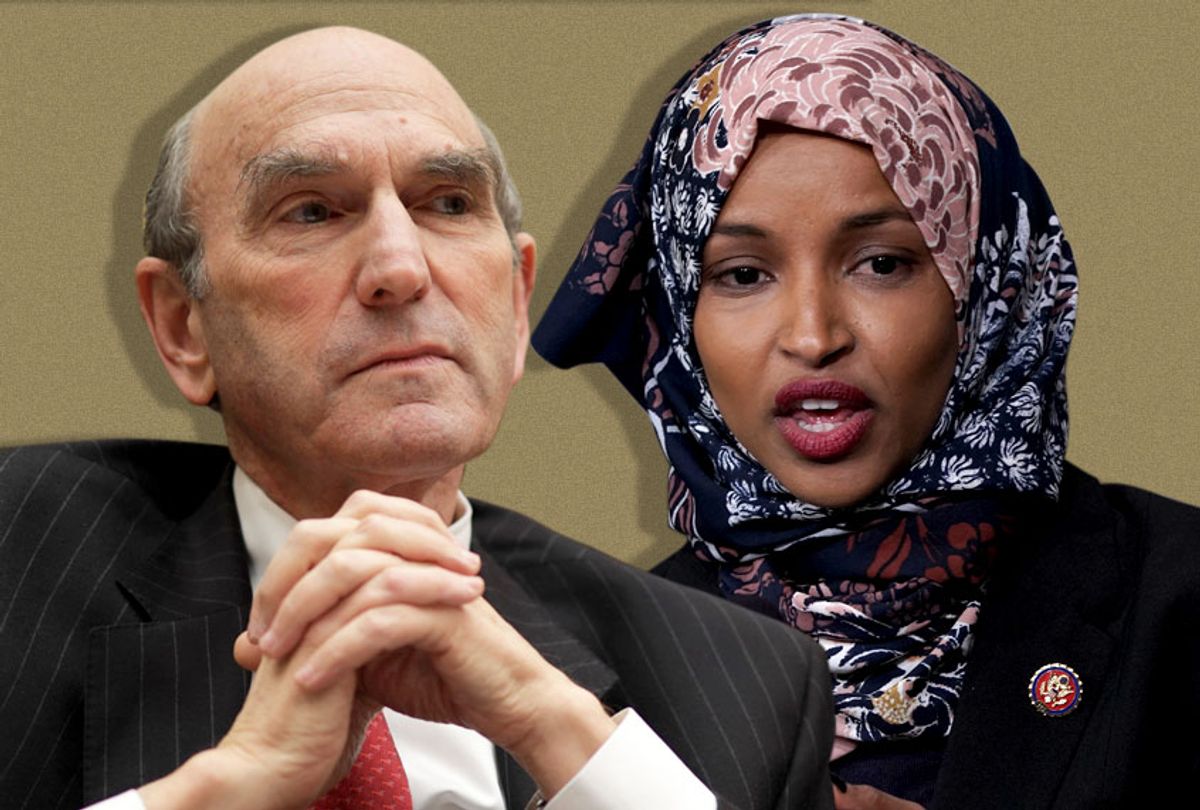 The tension began when Omar asked Abrams about America's support for anti-Communist groups in Central America during the Cold War, drawing specific attention to Abrams' characterization of reports about the 1981 El Mozote massacre in El Salvador as left-wing propaganda.

"Would you support an armed faction within Venezuela that engages in war crimes, crimes against humanity or genocide if you believe they serve the U.S. interests as you did in Guatemala, El Salvador or Nicaragua?" Omar asked Abrams. She also said she wanted to find out if "a genocide will take place and you will look the other way because American interests were being upheld."

"I am not going to respond to that question," Abrams retorted. He also shouted "I’ve been attacked!" at a point during the conversation when he felt Omar was not giving him a fair opportunity to defend himself.

Abrams told Congress during his testimony that "there is a storm brewing inside the Maduro regime. He will not be able to weather it much longer." He also insisted that the public in Venezuela is starting to turn on the strongman leader, although he declined to provide public details. During Abrams' testimony, protesters shouted "coup!" in response to the accusation that the revolution against Maduro was prompted by the United States, and another protester accused Abrams of being a war criminal. All of them were removed from the hearing.

There were commentators on both the left and right who were unhappy with Omar's questioning of Abrams.

"Omar’s comportment at the hearing, as well as her obvious belief that the United States is an imperialist and reactionary nation that by its very nature abuses human rights, should alone be reason enough to have her removed before she can do real damage," wrote Ronald Radosh of The Daily Beast.

Columnist Max Boot expressed similar thoughts, tweeting that Omar's statements toward Abrams were "disgraceful ad hominem attacks by @IlhanMN on my @CFR_org colleague Elliott Abrams. She doesn't seem to realize he is a leading advocate of human rights and democracy--not a promoter of genocide! More evidence of the loony left I caution Democrats about."

Meanwhile, Harvard professor Nicholas Burns, a veteran of the Clinton administration, tweeted, "Elliott Abrams is a devoted public servant who has contributed much of his professional life to our country. It’s time to build bridges in America and not tear people down."

But Omar wasn't the only Democratic member of Congress to publicly challenge Abrams.

In an allusion to Abrams' controversial role in the Iran-Contra scandal of the 1980s, Rep. Joaquin Castro of Texas asked him if he had any knowledge of weapons or defense equipment transfers to anti-Maduro groups by the American government. When Abrams said that he was not aware of such actions, Castro pointed out that "I ask this question because you have a record of such actions. Can we trust your testimony today?"

It is ironic that Abrams has been put in a position where he needs to defend the Trump administration's foreign policy. Trump refused to allow his first secretary of state, Rex Tillerson, to choose Abrams as his second-in-command because Abrams had written an editorial in the Weekly Standard that was harshly critical of Trump. Despite being on the president's bad side for that reason, Trump clearly developed enough faith in Abrams' foreign policy acumen to entrust him with a very sensitive geopolitical issue.

Omar also aroused controversy recently when she made comments about the role of the pro-Israel lobby AIPAC that many Democrats as well as Republicans construed as being anti-Semitic.

Trump's foreign policy toward Venezuela has been particularly suspect because of comments he made early in his presidency that suggested he might favor military intervention against the far left-wing leader of that nation.

"Well, he’s using it in that particular way because obviously what was going on in Venezuela was something that began as a popular movement by [Juan] Guaidó and the man has now declared himself President," former Secretary of State Madeleine Albright told Salon in an interview published earlier this month. "But I do think, and this is a little difficult to talk about, because I do think that some of the parts in terms of supporting what has happened are absolutely appropriate. Not only by the United States but also in conjunction with some of the Latin American countries, the so-called Lima Group [Argentina, Brazil, Canada, Chile, Colombia, Costa Rica, Guatemala, Guyana, Honduras, Mexico, Panama, Paraguay, Peru, Saint Lucia], who are supportive of what is going on, as well as Canada. I thought, however, that the introduction of using military force at that particular time is something that did give kind of an alibi or an excuse to Maduro to say that this is just intervention."