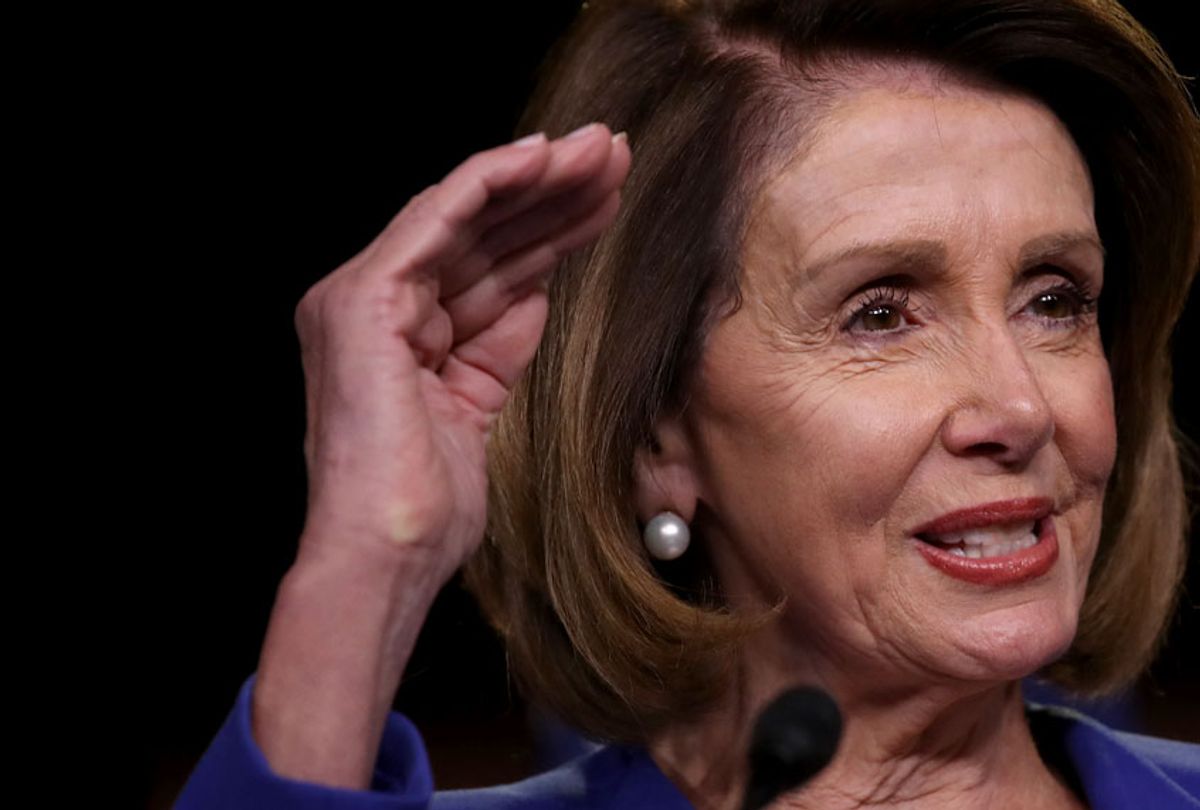 Speaker Nancy Pelosi (D-Calif.) said Wednesday that she would introduce legislation this Friday to block President Donald Trump's national emergency proclamation to build his long-promised wall along the U.S.-Mexico border, urging her colleagues on both sides of the aisles in the House of Representatives to come together to support the resolution.

In a letter to both Democrats and Republicans, Pelosi asked lawmakers to co-sponsor the resolution written by Rep. Joaquin Castro (D-Texas), noting that the lower chamber will "move swiftly to pass this bill" and place it on the president's desk.

"President Trump's emergency declaration proclamation undermines the separation of powers and Congress' power of the purse, a power exclusively reserved by the text of the Constitution to the first branch of government, the legislative branch, a branch co-equal to the executive," Pelosi wrote Wednesday in a "Dear Colleague" letter.

Under the National Emergencies Act, which Trump is invoking to claim broad authority to declare an emergency at the southern border, Congress can take up a joint resolution to disapprove and essentially block the declaration. The resolution is likely to pass the Democratic-controlled House but could face opposition in the Republican-controlled Senate. (Notably, some Republican lawmakers have publicly criticized Trump's use of executive power.) If both chambers pass the joint resolution, it would require the the president's signature. Trump is unlikely to sign a bill that overturns his own declaration.

If the legislation is vetoed by Trump, Congress would then have to pass the joint resolution with a veto-proof majority. This means that two-thirds of the House and the Senate would have to approve the bill — a threshold that would be difficult to achieve even in the House, where Democrats have a 235-197 majority. It is unlikely that there are enough supporters in Congress to override the president's veto.

Trump declared a national emergency last week in an effort to access billions of dollars that Congress refused to appropriate for his campaign promise of a wall along the border. Attempts to negotiate with Congress to obtain the $5.7 billion Trump had sought for more than 200 miles of steel walls along the southern border failed, resulting in the nation's longest-ever government shutdown. Congress eventually passed a 1,169-page bipartisan spending package that included $1.375 billion for 55 miles of new walls, which Trump signed before saying he would also use his executive powers to declare a national emergency. Earlier last week, the commander-in-chief said he was not pleased with the bipartisan agreement reached by Congress.

"I could do the wall over a longer period of time ― I didn't need to do this," Trump said last week. "But I'd rather do it much faster."

Trump's plan all but guaranteed a lengthy legal battle — Trump, for his part, admitted that he is expecting court challenges — and a coalition of 16 states filed a federal lawsuit on Monday arguing that the president's decision to declare a national emergency in order to obtain funding for a border wall was unconstitutional.

"Contrary to the will of Congress, the president has used the pretext of a manufactured 'crisis' of unlawful immigration to declare a national emergency and redirect federal dollars appropriated for drug interdiction, military construction and law enforcement initiatives toward building a wall on the U.S.-Mexico border," the suit, led by California Attorney General Xavier Becerra, reads.

Pelosi on Wednesday argued that members of Congress took an oath to support and defend federal laws, noting that Trump had gone "outside the bounds of law to try and get what he failed to achieve."

"We have a solemn responsibility to uphold the Constitution and defend our system of checks and balances against the president's assault," she concluded.

Lawmakers in the House of Representatives have until 3 p.m. ET Thursday to sign on to Castro's resolution. As soon as members of the lower chamber vote on the legislation, the clock starts ticking for lawmakers in the Senate, who are required by law to put the measure to a vote within 18 days. It is unclear how many Republican lawmakers will support the legislation, but Trump is poised to issue the first veto of his presidency. To override the president's veto, more than 53 Republicans in the House would need to join the Democrats to reach 288 votes. In the Senate, 20 Republican lawmakers would need to join the Democrats to reach the 67 threshold.