"I am going to be signing a national emergency," Trump said during an event in the Rose Garden at the White House 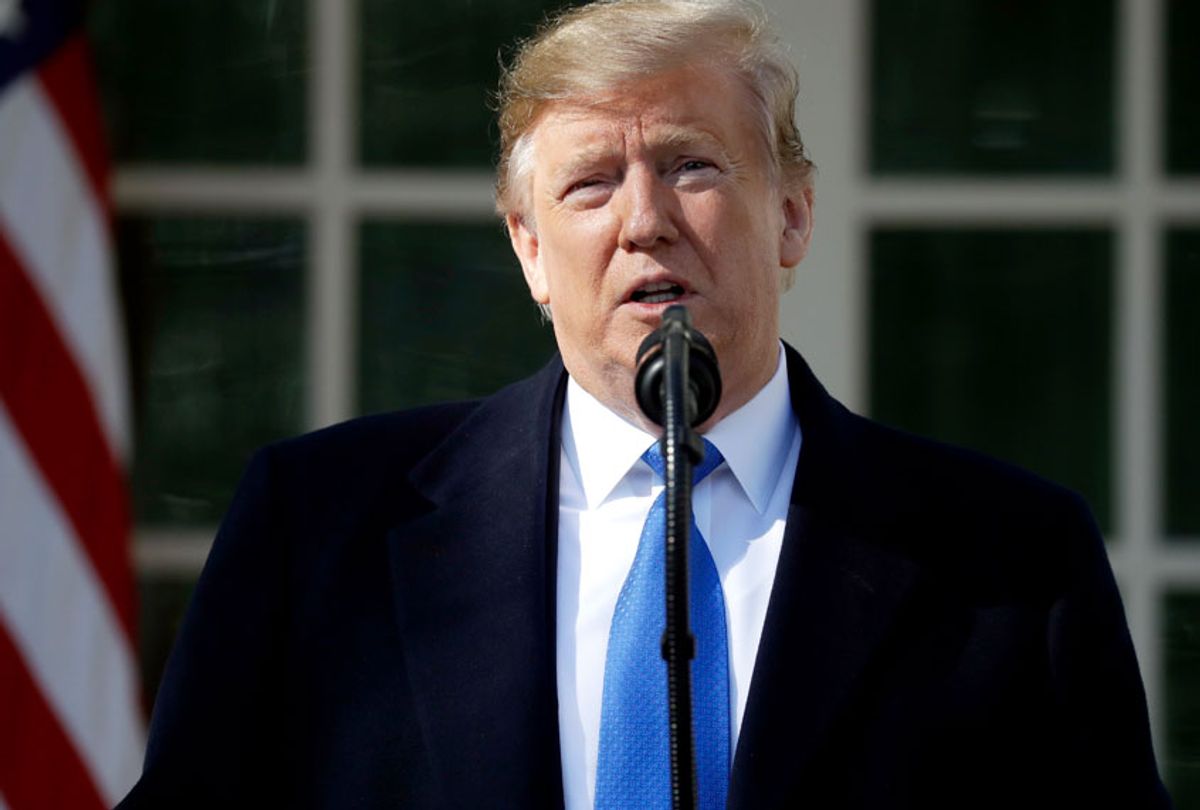 Donald Trump speaks during an event in the Rose Garden at the White House to declare a national emergency in order to build a wall along the southern border, Friday, Feb. 15, 2019, in Washington. (AP/Evan Vucci)
--

President Donald Trump declared a national emergency at the U.S.-Mexico border Friday in order to access billions of dollars in funds that Congress refused to appropriate for the construction of his long-promised "wall."

"I am going to be signing a national emergency," Trump said during a televised event in the Rose Garden at the White House. He added that declaring a national emergency is "a great thing to do" because, he claimed, the United States has "an invasion of drugs, invasion of gangs, invasion of people," which he characterized as a grave threat to national security. The president alleged the "tremendous amounts of drugs flowing into our country" are "coming from the southern border."

Friday's announcement follows the passage of a 1,169-page bipartisan spending package that includes $1.375 billion for 55 miles of new border fences — a snippet of the $5.7 billion Trump has sought for more than 200 miles of steel walls along the southwestern border. On Thursday, the White House announced that Trump would declare a national emergency at the border. The decision came after the commander-in-chief said he was not pleased with a bipartisan agreement reached by Congress earlier this week to avert a second government shutdown over border security and immigration.

By declaring a national emergency, Trump hopes to secure about $6.5 billion more to start constructing his wall immediately without the legislative approval required from Congress. Trump is reportedly seeking to redirect funds from the Treasury Department and the Pentagon to build a wall, claiming that "some of the generals think this is more important."

Trump, in fact, repeatedly promised during the 2016 presidential campaign that Mexico would pay for the construction of his $5.7 billion "wall" along the southern border, and dozens more times since he took office.

Many of Trump's allies, and about a half-dozen Senate Republican spoke out against the president's plan to declare a national emergency at the nation's southwestern border. Sen. Marco Rubio of Florida called it a violation of the U.S. Constitution, while Sen. Susan Collins of Maine called the decision "a mistake." Sen. Thom Tillis of North Carolina said he hates the idea of Trump declaring a national emergency at the border, and Sen. John Cornyn, who represents Texas, said "it would not be a practical resolution." Meanwhile, Sen. Lindsey Graham warned that there could be a "war" among Republicans should Trump invoke the National Emergencies Act.

White House officials, including Jared Kushner, have indicated they would prefer Trump not to rely on such an option to build the wall because of the legal challenges that would follow.

"So the order is signed — and I'll sign the final papers as soon as I get into the Oval Office and we will have a national emergency," Trump said. After he signs the national emergency, Trump said, "We will then be sued," mentioning a possible chain of events, which included a "bad ruling" in the Ninth Circuit Court of Appeals, which Trump and other Republicans have contended is liberal-leaning.

"The president is doing an end run around Congress," House Speaker Nancy Pelosi, D-Calif, said on Thursday. She suggested that Trump's declaration would set a precedent for future Democratic presidents to act on issues like gun control — the exact scenario that concerns Republicans.

"You want to talk about a national emergency? Let's talk about today," Pelosi said, reminding Trump that it was the anniversary of the shooting massacre last February at Marjory Stoneman Douglas High School in Parkland, Fla., where seventeen students and staff members were killed. "That's a national emergency. Why don't you declare that emergency, Mr. President? I wish you would."

Trump has argued that a border wall will stop what he has called "an urgent national crisis" at "our very dangerous southern border," which he claimed, without offering evidence, has led to a surge of crime, drugs and human trafficking caused by migrants seeking illegal entry. His previous request for wall funding led to the longest government shutdown in American history shortly before the Christmas holiday.

Trump has repeatedly told vivid, and at times, disturbing anecdotes of criminal activity in an attempt to rally support for his long-promised wall along the U.S.-Mexico border. Two in particular, involving women gagged with duct tape and prayer rugs, have generated so much attraction that administration officials have reportedly launched an urgent effort to find evidence to back up the president's rhetoric — yet, so far, no factual evidence has been found. Trump repeated these claims during his Rose Garden event on Friday.

Earlier this week, Trump hosted his first campaign rally of the year in El Paso, a Texas city that shares a border with Mexico, where he presented his hardline message on immigration and made another public demand for the wall. Trump falsely cited El Paso during his State of the Union speech earlier this month as an example of a city where building a wall had worked to deter crime. He reiterated those claims on Friday.

"The border city of El Paso, Texas, used to have extremely high rates of violent crime — one of the highest in the country — and considered one of our nation's most dangerous cities," Trump said during his State of the Union address. "Now, with a powerful barrier in place, El Paso is one of our safest cities."

In fact, before the border barriers were installed in El Paso in 2008, the city "had the second-lowest violent crime rate among more than 20 similarly sized American cities," the New York Times reported. El Paso's crime rate stayed the same in 2010, after the fence construction, and it was never considered one of the most dangerous cities in the country.

As Trump took questions from reporters in the Rose Garden on Friday, White House press secretary Sarah Sanders tweeted a black-and-white photograph of the president signing the national emergency declaration in the Oval Office.