Sean Hannity urges Donald Trump to declare national emergency at southern border: "This is the time" 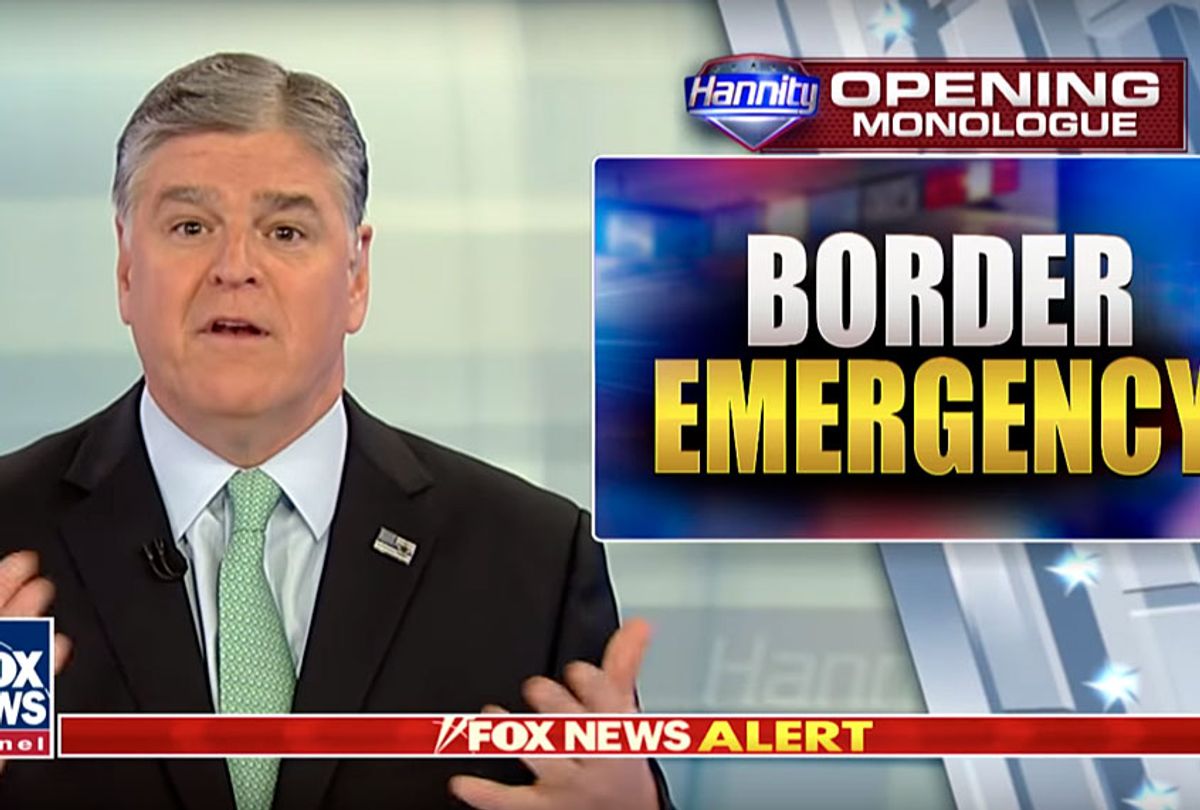 Fox News host Sean Hannity, who acts as an informal adviser to the president, urged Donald Trump on Tuesday to declare a national emergency at the U.S.-Mexico border.

"This is the time," Hannity said on his primetime show. "That is a necessity."

Hannity's declaration came hours after the commander-in-chief said he was not pleased with a bipartisan agreement reached by Congress "in principle" to avert a second government shutdown over border security and immigration.

"I can't say I'm happy. I can't say I'm thrilled," Trump told reporters as in response to the deal reached by Democrats and Republicans, which would give him a fraction of the funds he has requested for his wall along the southern border.

The agreement includes $1.375 billion for 55 miles of new border fences — a figure that Hannity previously suggested was peanuts compared to the $5.7 billion Trump had previously demanded for the construction of 200 miles of walls along the southern border.  Hannity slammed the deal as "garbage" on his show Monday night and warned that any Republican supporting the compromise would "have to explain" his or her position.

On his show Tuesday night, Hannity noted that if the president signs the compromise, it would "guarantee the $1.375 billion down payment for the wall." He added that with the $900 million Trump has identified for additional construction, he would have $2.3 billion. Still, Trump would remain short for cash and "would need to declare a national emergency" to construct his wall, Hannity said.

Declaring a national emergency would allow Trump to start constructing his wall immediately by circumventing the legislative approval required from Congress. Republicans lawmakers and White House officials, including Jared Kushner, have indicated they would prefer Trump not to rely on such an option to build the wall because of the legal challenges that would follow. Hannity noted the possible legal challenges that declaring a national emergency may have on his show.

"The national emergency would be challenged, as we always see with the Democrats. They'll go judge shopping in California, or Oregon or Hawaii. Then they'll go to the Ninth Circuit," he said, referring to the court of appeals that has Republicans, including Trump, have contended is liberal-leaning.

"Every case that gets filed in the Ninth Circuit – we get beaten – and then we end up having to go to the Supreme Court, like the travel ban, and we won," Trump said late last year. "The Ninth Circuit is really something we have to take a look at, because it's not fair."

While it remains unclear whether Trump will declare a national emergency, the president on Tuesday said that another government shutdown looks unlikely.

"If you did have it, it's the Democrats fault," he added. "I would hope that there won't be a shutdown. I am extremely unhappy with what the Democrats have given us."

A spending bill must pass the House and Senate and get signed by Trump before the clock strikes midnight Friday. If Congress and Trump do not reach an agreement, large portions of the federal government will run out of money and shut down just three weeks after the the longest budget impasse in U.S. history ended.