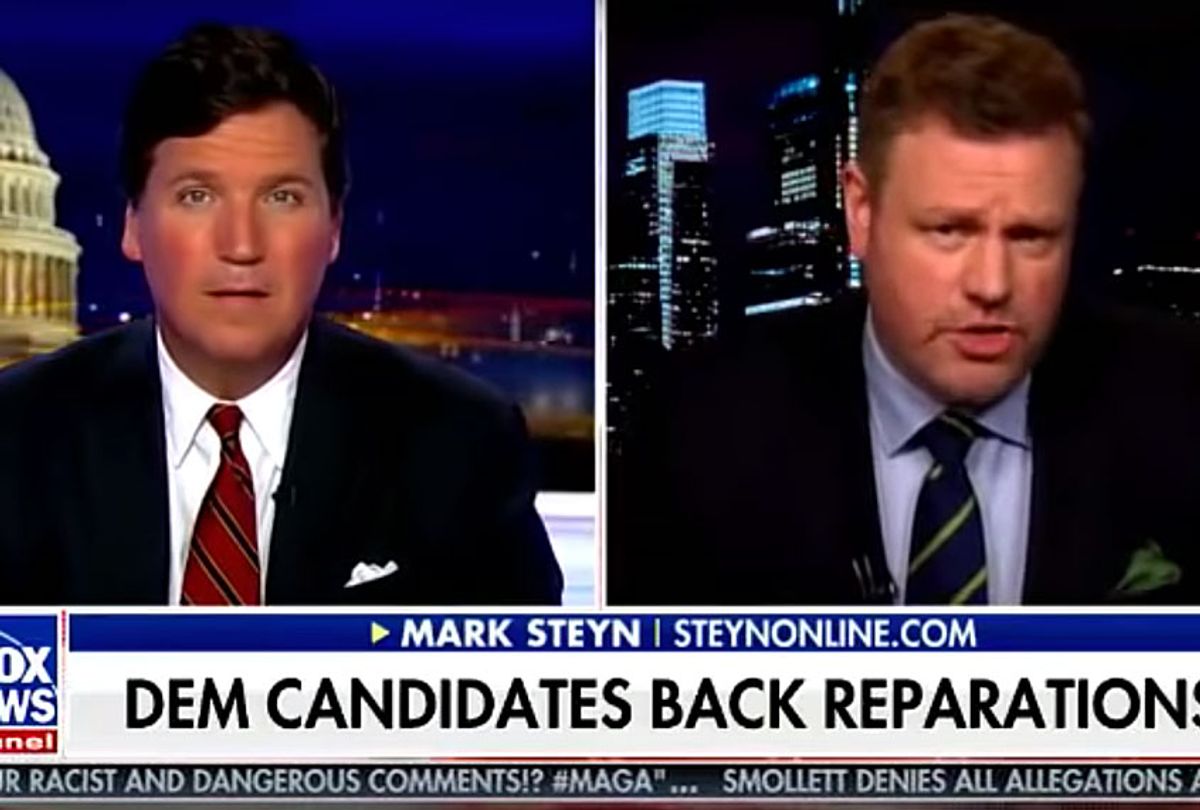 During a Thursday night appearance on the Fox News program "Tucker Carlson Tonight," guest Mark Steyn told black Americans they  "need to move on" from slavery.

"Slavery was abolished a century and a half ago. Nobody alive today has a grandparent who was a slave. And, in that sense, I think you reach a point where, you know, you need to move on," Steyn, a conservative Canadian commentator, said during a discussion about two leading Democratic presidential candidates, Sens. Kamala Harris of California and Elizabeth Warren of Massachusetts, who have reportedly said they support reparations for black Americans affected by slavery.

"This is disturbing if reparations is becoming a mainstream position," Steyn continued in his discussion with Carlson. "It's particularly absurd, I think, for Elizabeth Warren to be in favor of that. This is someone who, in a sense, has benefited from a fake appropriation of racial grievance — as you know the business about her being 1/1,024th Native American, presumably," he added, referring to Warren's claims of Native American ancestry, which have come under intense scrutiny from the Cherokee Nation, President Donald Trump and other members of the Republican Party.

Steyn added, "The reparations thing, eventually as the decades go by, becomes ridiculous."

The segment may not come as a surprise to those who are familiar with Carlson's ideology; the Fox News host often decries identity politics on his primetime show.

Carlson asked his guest the following about the self-described democratic socialist: "Why is there no room in the Democratic Party for someone to just make a straightforward economic case?"

"You cannot talk about economic inequality in the country without talking about racial and economic disparity because of the systems we have built and the legacy of slavery and Jim Crow and internment and all of those things," Suraj Patel, a Barack Obama campaign veteran and business ethics professor, explained. "What he is saying, basically, is that things like race and inequality are inextricably intertwined based on institutions we have built and the legacies of them."

Carlson, in response, told Patel that he was "confusing" him because, the Fox News host claimed, "the richest people in America are not white people" but rather "immigrant groups," particularly "Indian immigrants."

"A Nigerian immigrant makes more than the average white American, so it's a lot more complicated," Carlson added. "And I'm not sure what that means, but I know what you said is totally false."

"It is very complicated, but the fact of the matter is that you are by and large, statistically speaking, the darker you are in this country, the poorer you are," Patel responded.

"Hold on. But hold on, that's not true," Tucker pushed back. "Slow down. That's not true. It is so much more complicated than that – that what you are saying is a lie. And so Asian immigrants, for example, have the highest educational attainment level and highest incomes of any group in America, OK?"

Carlson agreed with Patel that the issue is "super complicated," although he claimed that Patel and other Democrats are "painting a picture of racial division that isn't backed up by the facts."