"This case is not about murder, drug cartels, organized crime, the Madoff Ponzi scheme or the collapse of Enron" 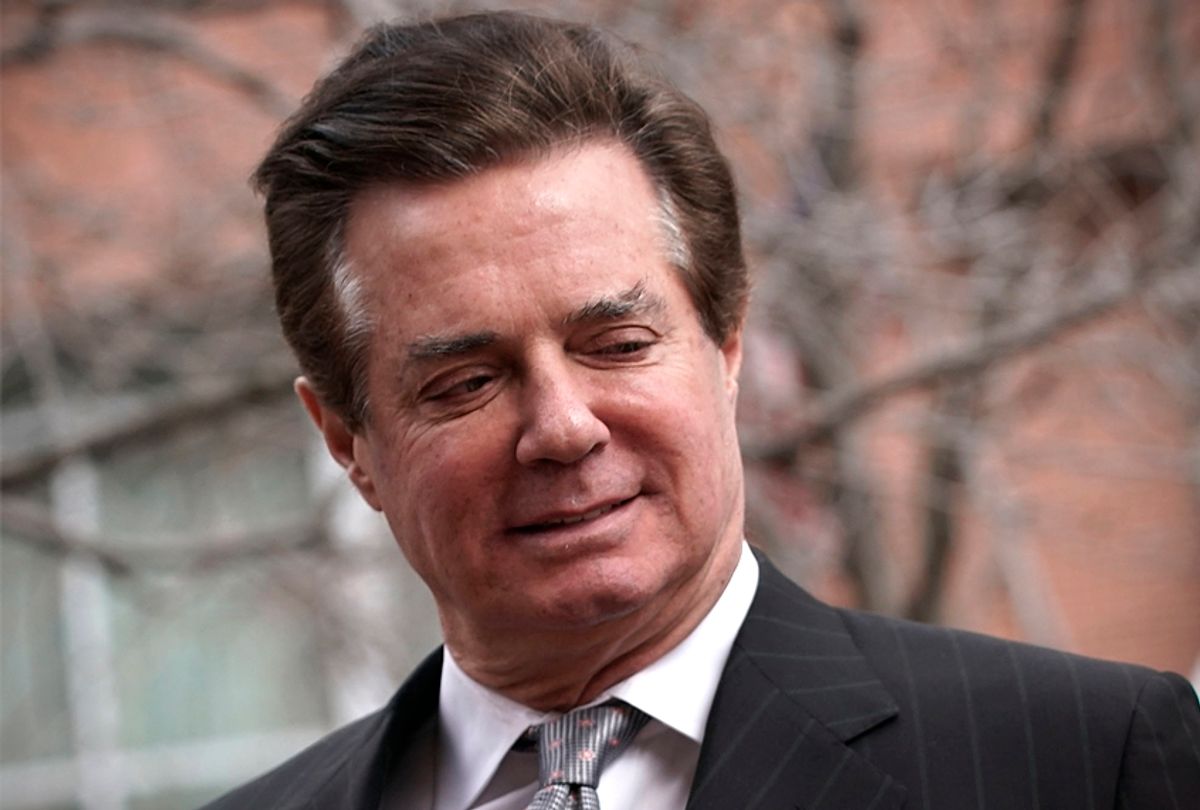 Lawyers for Paul Manafort,  the longtime Republican consultant who spent five months as President Donald Trump's campaign chairman during the 2016 election, pleaded on Monday for a federal judge to spare their 69-year-old client from a sentence that would essentially send him to prison for the rest of his life.

In a 47-page memo submitted to the U.S. District Court in Washington, Manafort's legal team described a client who has allegedly been "personally, professionally and financially" ruined by special counsel Robert Mueller's investigation into allegations of collusion between Trump's 2016 presidential campaign and Russia. They argued that Manafort deserves a sentence "significantly" less than the statutory maximum of 10 years he faces after pleading guilty to conspiracy charges and charges of lying to federal prosecutors and a grand jury in his case.

"Mr. Manafort has been personally and financially devestated [sic] as a result of his conduct and the forfeiture he has agreed to," his lawyers wrote. "There is no reason to believe that a sentence of years in prison is necessary to prevent him from committing further crimes."

His attorneys added that Manafort "poses no risk to the public, which itself has certainly been generally deterred from engaging in similar conduct based on the widespread negative publicity this case has garnered, as well as his incarceration in solitary confinement."

In their memo, Manafort's lawyers argue that their client has "served four U.S. presidents and has no prior criminal history," but he is "presented to this court by the government as a hardened criminal."

"This case is not about murder, drug cartels, organized crime, the Madoff Ponzi scheme or the collapse of Enron," they write in the memo.

Instead, they said Manafort has been irreparably damaged by the scrutiny and scope of the probe, which has resulted in no charges related to "Russian collusion."

Manafort's case, the lawyers said, already acts as a deterrent  to any potential future violators.

"As a result of this widely-reported case, the public now understands what can happen when the full prosecutorial force of the United States government is brought down upon an individual, and would-be violators have been generally deterred from engaging in similar conduct," they wrote.

Manafort's legal team included statements from character witnesses, including his wife, Kathleen, and his daughter, who said her father was "worthy of forgiveness."

The memo from Manafort's legal team follows a sentencing document submitted by Mueller's office on Friday night for one of two criminal cases brought against the former Trump campaign chairman. Prosecutors in that memo, which was filed in federal court in Washington, said Manafort "repeatedly and brazenly violated the law," in the process revealing "a hardened adherence to committing crimes and lack of remorse." The document lists a litany of Manafort's crimes, including "garden-variety" offenses like "tax fraud, money laundering, obstruction of justice and bank fraud" and more "esoteric" crimes, such as breaking the Foreign Agents Registration Act. Prosecutors also alleged that Manafort was "bold" in his criminality, engaging in illegal activity not only before and while he worked for the Trump campaign but also while he was out on bail.

Manafort was convicted last year on eight counts of bank and fraud tax, and he pleaded guilty to two more charges of conspiracy and lying to the FBI. He is scheduled to be sentenced next month in two separate federal criminal cases, in Virginia and in Washington, for crimes related to unregistered foreign lobbying and advising pro-Russian politicians and oligarchs in Ukraine in the years before he joined Trump's presidential campaign.

In Virginia, U.S. District Court Judge T.S. Ellis III had scheduled Manafort's sentencing for early February, but the hearing was postponed until attorneys resolved a dispute over whether Manafort had breached his plea deal with Mueller in the Washington case. Jackson ruled last week that Manafort had purposefully lied to the FBI, as well as to Mueller's team, about contacts he had with Trump administration officials and his connections to Russian-linked intelligence officers two months after reaching a plea deal, thus voiding it and allowing Mueller to recommend a harsher sentence. Mueller's team recommended that Manafort serve as long as 24.5 years  in prison in the Virginia case — essentially a life sentence for the 69-year-old. He is scheduled to be sentenced at a U.S. district court in Virginia on March 8, according to a court filing.

Manafort also awaits a March 13 sentencing date in the case brought by Mueller in Washington, where he pleaded guilty to conspiracy charges and charges of lying to federal prosecutors and a grand jury.

Last November, Trump, speaking of a pardon for Manafort, said he "wouldn't take it off the table." At the time, Democratic Rep. Jerry Nadler of New York, the chairman of the House Judiciary Committee, warned Trump that "even dangling a pardon" for Manafort "would fortify a claim or charge of obstruction of justice." Most recently, Bloomberg News revealed New York state prosecutors are preparing to file criminal charges against Manafort in the event that he receives a presidential pardon.