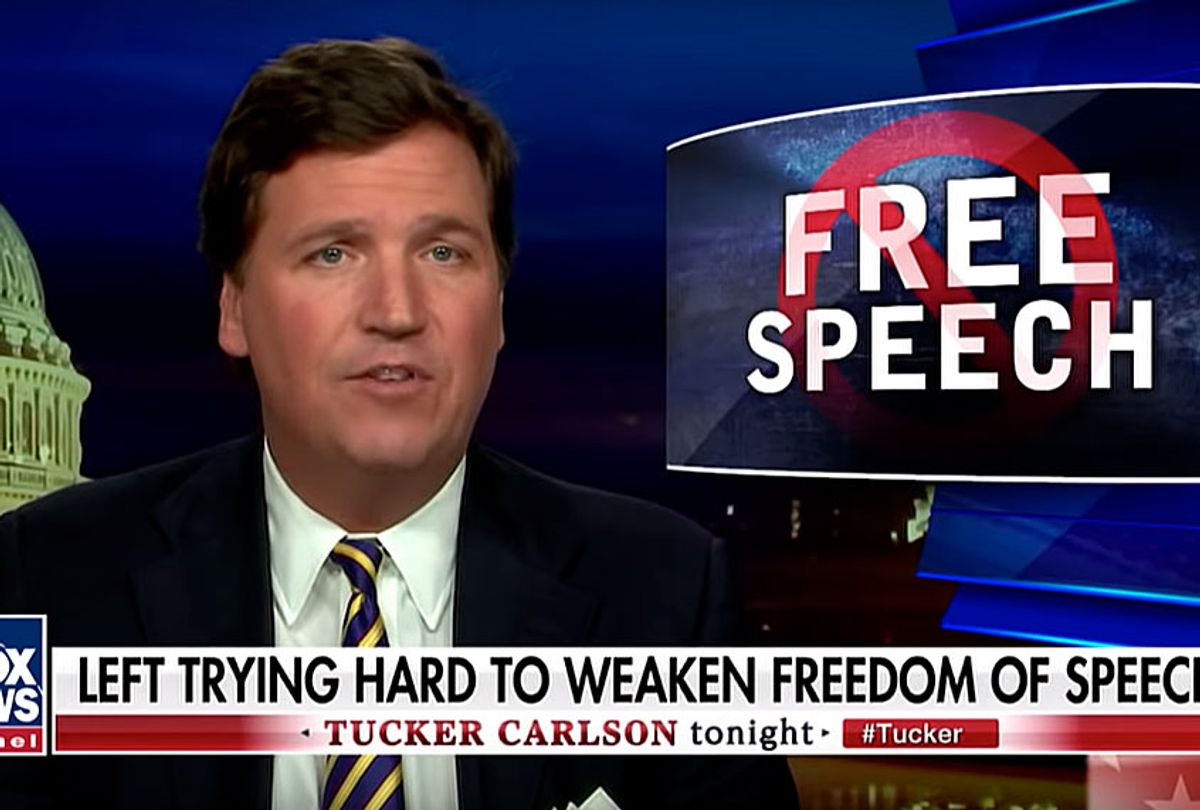 Carlson claimed the left has spent decades weakening the First Amendment by "creating phony hate speech exemptions out of thin air" and are now allying with big corporations, like PayPal, to "make it impossible for people who say the wrong things to make a living in this country."

The Fox News host then said PayPal is "essential" for anyone who wanted to make money online before criticizing the company and its CEO Dan Schulman for refusing service to far-right conspiracy theorist Alex Jones, anti-Muslim activist Laura Loomer and white nationalist website VDARE, which he described as merely a "publication."

"Last year, PayPal banned Alex Jones from using its platform for saying things they didn't like," Carlson continued. "They've also banned anti-Muslim activist Laura Loomer, the publication VDARE and a number of other people and organizations whose speech they believe should be silenced."

The Fox News then said Shulman did not really mean it when he said in an interview published by The Wall Street Journal earlier this week that diversity and inclusion are the company's top values. Instead, Carlson claimed, Schulman wants "utter conformity, a world where only approved opinions are allowed."

Carlson then criticized Shulman for taking advice on hate speech from the Southern Poverty Law Center, a non-profit that tracks hate groups across the U.S. and reports their activities to the public, law enforcement agencies and the media. The Fox News host dismissed SPLC as "fraudulent" and an "arm of the Democratic National Committee."

VDARE, which is designated as a hate group by SPLC, praised Carlson for speaking out against PayPal and mentioning the site a shoutout during his primetime show.

"Thanks To Tucker Carlson! Tucker Calls Out PayPal For Deplatforming, Names VDARE.com Among Victims," VDARE tweeted.

Tuesday was the second night in a row that Carlson assailed the SPLC on his highly-rated primetime show. On Monday, Carlson claimed the SPLC was made up of "partisan activists who pose as researchers" that use "moral panics to gin up fundraising." He also accused the SPLC of "making up" hate crimes, declaring that the U.S. is "just not a very hateful place."